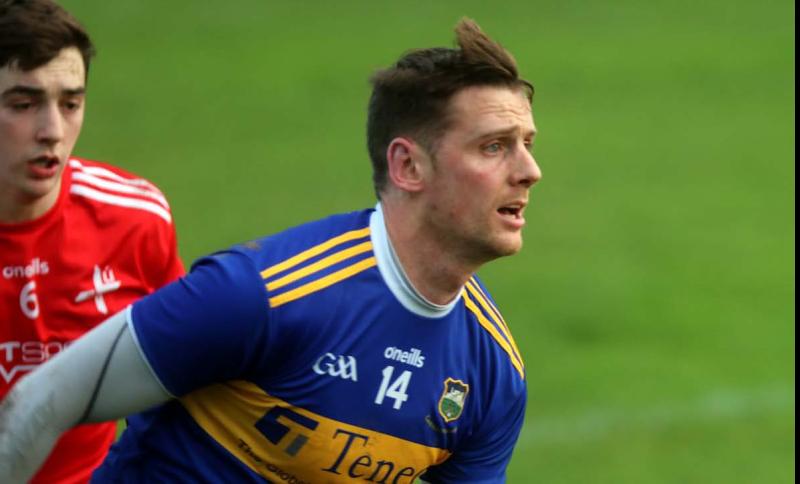 Captain, Conor Sweeney scored three points when Tipperary were beaten by Carlow in the Tailteann Cup

Tipperary can have no complaints about their surprise defeat by Carlow in the first round of the southern section of the Tailteann Cup, senior football championship at Netwatch Cullen Park in Carlow this afternoon.
Tipp had eleven points to spare over their Leinster opponents in Thurles in March en route to securing promotion from the third division of the national league. However, on this occasion Carlow turned the tables in a manner more convincing that the two points margin at the final whistle would suggest.
Tipp were a point in front at half-time but completely lost their way in the second half, when their performance became ragged and disjointed.
They started the second half brightly and a Sean O'Connell point had them two ahead seven minutes into the new half. Points from Ross Dunphy and Conor Doyle, however, had Carlow back on level terms by the 46th minute, and a few minutes later Colm Hulton put them ahead for the first time.
With the bit between their teeth, Carlow pushed on with a further point from Conor Crowley, before Shane O'Connell struck back for Tipperary with a rising shot that barely cleared the crossbar.
From then on, however, Carlow took firm control of proceedings. Colm Hulton made it 1-9 to 1-7 and further scores from Jamie Clarke and Seanie Bambrick had them four points clear and sitting pretty, as the minutes ticked away.
On the hour mark they went close to scoring a second goal, only for Tipp goalie Michael O'Reilly to deflect Shane Buggy's effort, with a combination of Colm O'Shaughnessy and Shane O'Connell blocking Niall Hickey's effort when he seized the rebound.
Despite being outplayed for much of the second half Tipp, to their credit gave Carlow plenty to think about in the six minutes of additional time.
Substitute Liam McGrath had Tipp's first score in 20 minutes and when the Loughmore player scored again shortly afterwards just two points separated the sides. However Jamie Clarke struck a settling score for Carlow and despite a converted free from Conor Sweeney with time almost up, Tipp were unable to either seize a shock win or force extra-time, as the curtain came down on their season.
Tipperary held a slender 1-5 to 1-4 advantage at the break, although if Carlow hadn't left their shooting boots at home they would surely have been ahead at the interval.
The home team shot nine wides in the opening half, compared to Tipperary's four. The worst of those misses came in the fourth minute, when Mikey Bambrick worked himself into a great position but he fluffed with effort, with only Tipp goalie Michael O'Reilly to beat.
After a cagey opening period, Tipp struck first blood in the 10th minute after a great move assembled by Colm O'Shaughnessy, Jack Kennedy, Conor Sweeney and Kevin Fahey. When the ball came back to Jack Kennedy his goal-bound shot was blocked but Martin Kehoe first-timed the rebound to the corner of the net.
Points from Conor Sweeney, Sean O'Connor (from a free), Sweeney again (free) and Jack Kennedy maintained Tipp's advantage, with Darragh Foley (free), Eoghan Ruth, Ross Dunphy and Ruth again replying for Carlow.
After Sean O'Connor converted his second free (1-5 to 0-4), Tipp went close to extending their lead to seven points. When Conal Kennedy accepted a pass from Colm O'Shaughnessy he had only one thing on his mind, as he took off on a lightning-fast burst towards goal, but his shot struck the post.
When Carlow launched a quick counter attack, Mikey Bambrick's delivery was broken to Niall Hickey, who stroked a shot to the net three minutes before half-time, and with the second half to come it was very much game on.
Tipperary: Michael O'Reilly, Shane O'Connell (0-1), Jimmy Feehan, Willie Eviston, Kevin Fahey, Colm O'Shaughnessy, Sean O'Connell (0-1), Conal Kennedy, Mark Russell, Teddy Doyle, Jack Kennedy (0-1), Martin Kehoe (1-0), Mikey O'Shea, Conor Sweeney (0-3, 2 frees), Sean O'Connor (0-2 frees).
Substitutes: Stephen Quirke for Sean O'Connor (half-time), Liam McGrath (0-2) for Mark Russell (51 minutes), Jason Lonergan for Martin Kehoe (51 minutes), Jack Harney for Sean O'Connell (56 minutes), Steven O'Brien for Teddy Doyle (62 minutes).
Carlow: Ciarán Cunningham, Liam Roberts, Mikey Bambrick, Dara Curran, Shane Clarke, Seanie Bambrick, Conor Doyle (0-1), Niall Hickey (1-0), Jamie Clarke (0-2), Josh Moore, Eoghan Ruth (0-2), Darragh O'Brien, Conor Crowley (0-1), Darragh Foley (0-1 free), Colm Hulton (0-2).
Substitutes: Ross Dunphy (0-2) for Darragh O'Brien (8 minutes), Shane Buggy for Conor Doyle (48 minutes), Cormac Lomax for Josh Moore (68 minutes), Jamie McCabe for Seanie Bambrick (70 minutes).
Referee: Cormac Reilly (Meath).