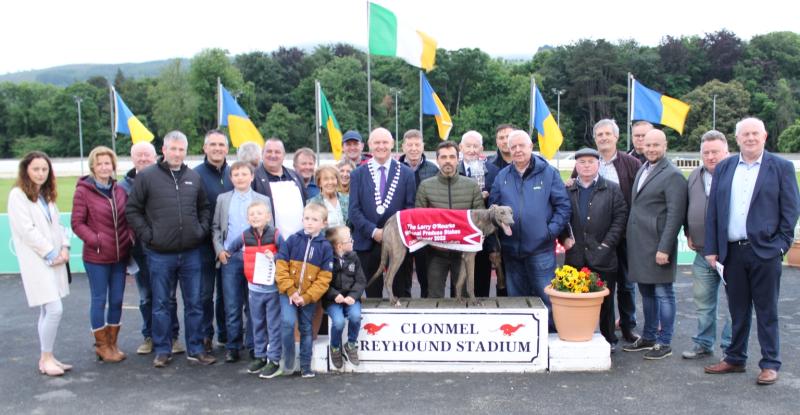 After a month of top-class greyhound racing at Clonmel Greyhound Stadium it was all down to the final on Sunday night last to decide the 2022 Larry O’Rourke National Produce Stakes Champion.
Unbeaten heading into the final, Swords Rex topped the betting at 1/3 with 3/1 and 4/1 readily available for the remaining five runners. An exceptionally large crowd attended the Stadium on Sunday evening with doors opened at six where patrons were treated to live music from “Mad Paddy” with all restaurants open for food.
An extremely competitive accompanying card with six other finals, an open sprint and the much awaited open 550 which saw last years Produce Stakes winner Explosive Boy compete.
Just after nine o clock the feature race of the night kicked off. Gaston Pecas wearing the red sheet, Newinn Homer just outside him with the odds-on favourite in three. Sunshine Dream occupied four, locally owned Serene Tiger in five and Radical Hero the youngest of the six wearing the stripped sheet.
The bell sounded and the noise decibels rising the hare was on the move. As traps popped up what no one wanted happened the favourite Swords Rex missed his break and was on catch up from the off as his kennel mate Newinn Wonder shared strides with Serene Tiger and Sunshine Dream.
As Swords Rex cut for the inside was forced wide with Eddie Ryan’s Serene Tiger hitting the front down the back straight with the Pat Buckley trained, Gaston Pecas hot on his tail. The Michael O’Donovan trained Serene Tiger rounding the final turn was joined by Javier Jarne’s Gaston Pecon showing his powerful finishing kick just got up on the line to take the 2022 National Produce Stake.
Great celebrations all-around as Gaston Pecas was paraded before the crowd. This years Stake was indeed a fantastic success and no doubt all of these six runners will compete in top events throughout the year and the Derby itself in September.
Winning The Slaneyside Greyhound Supplies Stake an upcoming young trainer Adam Dunford sent out Shancol James to land the spoils for P.J. & Charles Surgrue.
The Ned Morrissey sponsored Run Happy @ Stud Stake went to Jack Molloy’s Lough Mistoki after a very dominant run while the Chris Houlihan trained Seomra Nate, who holds the 325-track record at Clonmel, landed The Open 330 with a trap to line performance.
The John Meelam and John Byrne combination kept The Kieran Purcell Mem. Guys & Dolls Stake in Tipperary when Courty Girl after a very lively start held her lead to the line with The Greyhound Extreme Products Stake heading to Waterford after Jimmy Power’s Classic Chick finished strongest to land the spoils.
The much-awaited Unraced Stake Final had Carefree King the very hot favourite in one but never got into the race as the Thurles dog, Good Axel owned by Maria Kennedy, holding a very definite line made it a trap to line performance.

The Graham Holland trained Cryptopunk owned by Simon Taylor was some consolation for the Golden kennels after he landed The Track Bookmakers Open 575 as Explosive Boy made all the running in The Open 550 in a very impressive time as he sets his sights once again on further glory in Tralee.
Rounding of a very entertaining night local owners Tommy Caffrey and Kevin O Brien landed the final race which kicked off the celebrations running well into the night.
On Friday night last Adam Dunford completed a doble when Eshadda owned by Fran Burke from Edenderry taking the unraced and Fantasy Jesse owned by Leslie Coveney landed the sprint race. Cashel owner David Hickey kicked off the night winning the opener with Marion Kennedy also from Cashel winning the sixth with a trap to line run. Tommy Hegarty and Clare’s Seanie McMahon went home quite happy after Freedom Reader trained by Ballingarry’s Paraic Campion snatched the penultimate race right on the line as the Thurles owned Emers Luigi taking the final race of the night.