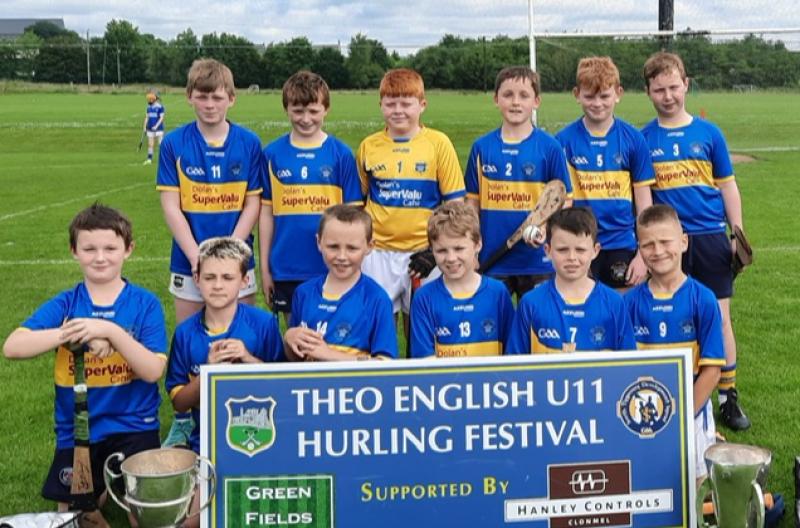 The Ballylooby/Castlegrace u11 hurling team had an amazing day at the inaugural Theo English Hurling Tournament on Sunday, July 10.

GAA News
Theo English U11 Hurling Tournament
Our u11 Hurling team had an amazing day at the inaugural Theo English Hurling Tournament on Sunday, July 10.
The day began with Jack Dillion - grand-nephew of Theo English's wife leading the team in a parade around the pitch behind Taigh M of the Moycarkey Pipe Band, followed by the National Anthem.
The team played 4 matches against Killenaule Mullinahone, Ballingarry and Carrick Swan, with great heart and skill shown.
The players were presented sliothars by Green Fields, and refreshments and goodie bags by Hanley Controls.
Many photos were taken with the Munster and All-Ireland Minor Cups.
Thanks to Killenaule GAA for hosting, to all the young whistlers, and to Tom Fitzgerald and Sean O'Meara for organising what was a fantastic tribute to a true legend of the game.
Looking forward to 2023 already!

Cul Camp
Another great Cul Camp has concluded in the GAA Field. Thanks to everybody who helped out during the week to make the camp an enjoyable occasion for all the kids.
Thanks especially to Michael Hurley and James Galvin who gave up their time for the week and as always, insured everything was organised to perfection.
Thanks also to Tom Fitzgerald and his coaching team and as a nice treat today he brought along the All Ireland and Munster Minor Hurling Trophies for pictures with the kids.
Special thanks to Chris O’Donnell for the time he gave today, signing many autographs, loads of photos and inspiring the next generation!
Well done to all involved