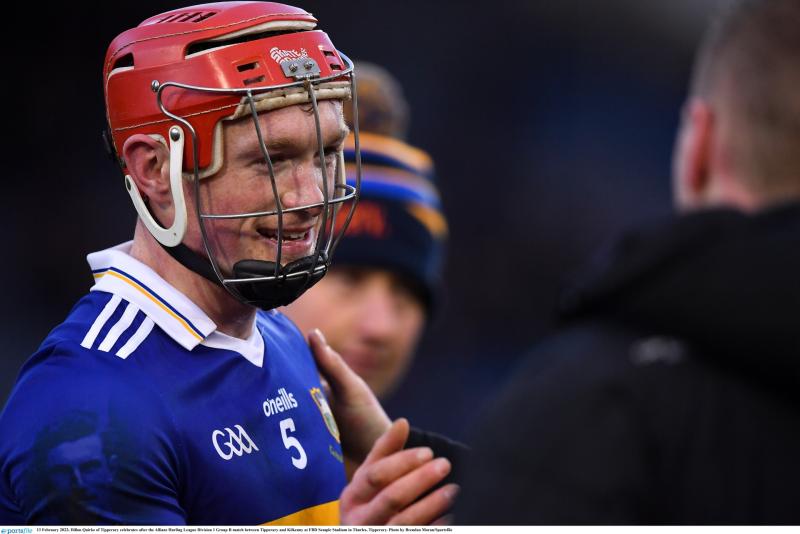 The Clonoulty Rossmore man was deemed a doubtful starter before the game but was operating at full forward for his side and creating a lot of problems for the Kilruane defence when he collapsed.

He was immediately attended to by Kilruane and Clonoulty players who summoned medical assistance with the Knights of Malta crew quickly on to the field.

As the seriousness of the situation became apparent an ambulance was called and the player, who by now had been stretchered off the field into the medical room at the stadium was attended to by paramedics.

He was later removed by ambulance to hospital.

After consultation between referee Michael Kennedy and the management of both sides, the
referee indicated that he was stopping the game.

At the time Clonoulty-Rossmore were leading 1-8 to 0-8 having recovered from a slow start which saw a very sharp-looking Kilruane race into a three points lead in as many minutes with Jerome Cahill, Niall O Meara and Thomas Cleary all on target.

Both sides were wayward in their shooting but Jack Ryan got Clonoulty off the mark with a pointed free after nine minutes followed immediately by another from Danny Slattery. William Cleary pointed a Kilruane free before Dillon Quirke responded, having had an attempted goal chance charged down earlier.

Danny Slattery’s second point levelled the game at 0-4 each by the 13th minute.

And so it continued with the teams swapping points reaching 21 minutes all square at 0-7 each.

Quirke used his height and strength to upset the Kilruane defence and create the chance for Conor Hammersley to rifle home a goal for a 1-8 to 0-7 lead.

Willie Cleary pointed a free for Kilruane and in the 26th minute a Cleary free struck the woodwork, the ball falling to Cian Darcy who was unable to fire home the rebound.

The premature end to the game came with Clonoulty enjoying a 1-8 to 0-8 advantage.

Up to that point the contest had been a lively affair, Clonoulty settling in after a slow start, but Kilruane were slick and pacey in their hurling and presented a goal threat every time they attacked.

Clonoulty used the long ball into Dillon Quirke to good effect and Kilruane were finding it hard to come to terms with this situation.

Danny Slattery was impressive for Clonoulty in the period shooting three points from play with John O Keeffe marshalling the defence confidently.

Though they were trailing when time was called Kilruane were very much in the game. Cian Darcy was a constant threat with Niall O Meara working well back the field and Jerome Cahill hitting two points from play.

The game was anybody’s when Dillon Quirke collapsed and referee Michael Kennedy decided, following consultation with both sides, to bring proceedings to a halt.