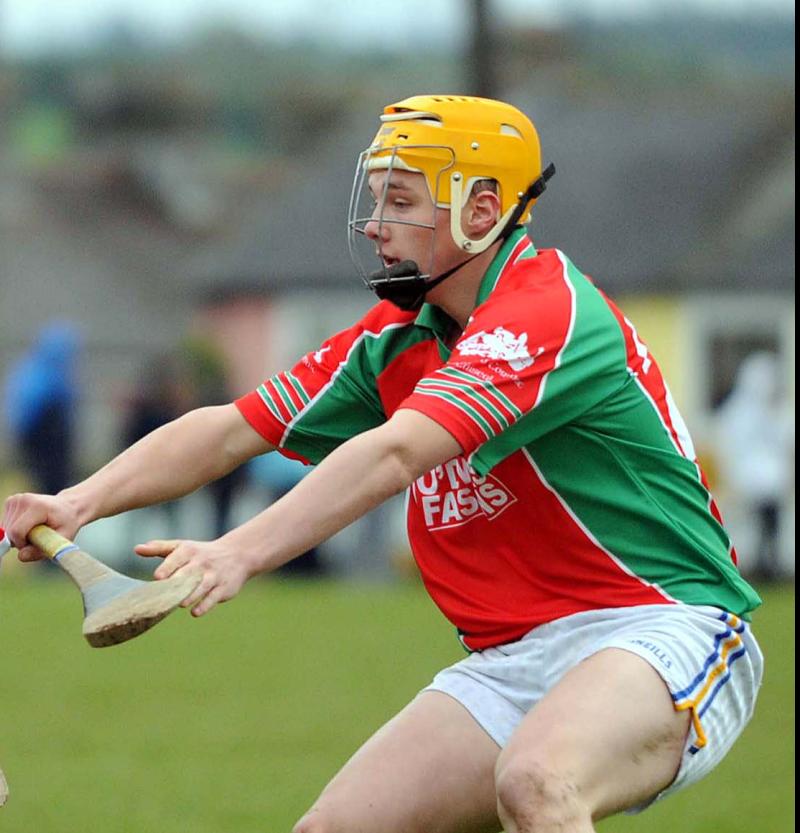 Adrian Cummins was among the goalscorers for Cashel King Cormacs in their Premier Intermediate Group 4 Round 3 win over Carrick Swan. File Photo.

Cashel King Cormacs made it three wins from three to top Group 4 in the FBD Insurance County Premier IHC with a deserved six points victory over Carrick Swan at Fethard on Saturday afternoon, 2-15 to 2-9.
A constant heavy drizzle during the first half, and a greasy sliotar that must have resembled a bar of soap at times, ensured difficult conditions for both sides but it was Cashel who finished stronger to maintain their impressive one hundred per cent record.
It was a third successive defeat for Carrick Swan and yet they challenged in all three group games. They led by two points at the interval, 1-6 to 1-4, and after an even third quarter, were just a single point in arrears, 1-11 to 2-7 entering the final ten minutes.
However, a straight red card for the influential Gavin O’Halloran disrupted their rhythm and the King Cormacs outscored them 1-3 to 0-2 in the closing stages, the goal from Adrian Cummins proving the decisive score.
It wasn’t a trouble-free win for Cashel. Injuries deprived them of four key players, including county man Ger Browne and joint captain Eoghan Connolly, and at times they struggled to kill off the Swan challenge. It was at times an absorbing battle between the two town sides, if very often error-strewn, but Cashel goals from Ross Bonnar and Adrian Cummins proved crucial, with Paddy Fahy chipping in with three fine points from play.
The conditions weren’t conducive to pretty hurling, with passes going astray with the slippery ball and both sides struggling with their shooting. Conn Bonnar and Paddy Fahy put Cashel two up in four minutes but the lead was wiped out within ten minutes through a Danny O’Hanlon 65 and a superb sideline cut from Gavin O’Halloran.
Cashel edged two clear again from a Devon Ryan free and Fahy from play and could have been farther ahead but for a brilliant save by Swan keeper Adam Kerwick from a Devon Ryan shot. Then at the other end Swan took the first goal chance that came their way, Cory Ryan finding the net with a brilliant goal to put the Carrick men 1-2 to 0-4 ahead.

Swan now upped the pace and a Danny O’Hanlon free put them two ahead following a foul on Jamie Holloway, who was causing a lot of problems for the Cashel defence. Conn Bonnar from halfway and Danny O’Hanlon traded frees before a Devon Ryan free after he had been fouled himself saw Swan lead by a single point, 1-4 to 0-6 at the break.
It was a lead that lasted no more than twenty seconds into the second half, Cashel breaking clear from the throw-in, with Devon Ryan setting up Ross Bonnar for a cracking goal past Kerwick. Cashel thought they had extended the lead through Jack O’Connor with the umpire waving the white flag, but after consulting with his linesman, referee Sean Lonergan overturned the decision.
Swan benefited from the reprieve and after play swung to the other end, Cory Ryan was sharpest in a goalmouth scramble to poke the ball to the net for his second goal and restore the Swan lead, 2-4 to 1-6.
Despite the concession of the goal, Cashel looked the more likely winners but their long-range shooting let them down with some very poor wides. It took a Devon Ryan free – one of six he scored from placed balls – to draw them level again and a great point from Paddy Fahy edged them in front. Holloway and Gavin O’Halloran from a free had Swan replies but Cashel were looking that little bit more dangerous with points from Ronan Connolly, Jack O’Connor and a Devon Ryan free putting them two clear, 1-11 to 2-6 midway through the half.
Swan substitute Kevin Lanigan and Devon Ryan with a free for Cashel swapped points before one of the game’s key moments. A superb Cashel move cut open the Swan defence, with sub Aaron Browne, in his first involvement since his introduction, putting Devon Ryan through the centre and his rasping shot was brilliantly saved by Kerwick for the expense of a 65.
However, the referee had seen a foul by Gavin O’Halloran in the build-up and after allowing the advantage, showed the Carrick man a straight red card. Devon Ryan pointed the ’65 to make it 1-13 to 2-7 and three minutes later the win was secured when a pass across goal from Paddy Fahy found Adrian Cummins unmarked and he gave Kerwick no chance with the shot.
There was no way back for Swan from a six points deficit and two points each from either side, Devon Ryan and Adrian Cummins for Cashel, and Dean Waters and a Cory Ryan free for Swan completing the scoring.
Cashel King Cormacs now go through to the championship quarter-finals as one of the four top seeds, with Carrick Swan looking at a preliminary quarter final against a second seeded team, as well as facing a relegation play-off.
Cashel King Cormacs - Jonathan Walsh, Ciaran Quinn, Nathan Ryan, Simon Delaney, James Cummins, Cathal Quinn, Lee Burke, Daniel Moloney, Ronan Connolly 0-1; Ross Bonnar 1-0; Conn Bonnar 0-2, 0-1 free; Adrian Cummins 1-1; Jack O’Connor 0-1; Paddy Fahy 0-3; Devon Ryan 0-7, 0-5 frees, 0-1 ‘65. Subs – Aaron Browne for Conn Bonnar; Pat Muldoon for Simon Delaney.
Carrick Swan – Adam Kerwick, Shane Torpey, Stephen Hahessy, Dean Kiely, Scott Hogan, Gavin O’Halloran 0-2, 0-1 free, 0-1 side-line cut; Billy Murphy, Ryan Waters, Aaron Dunne, Eric O’Halloran, Danny O’Hanlon 0-3, 0-2 frees, 0-1 ’65; Jamie Holloway 0-1; Aidan Waters, Taylor Fleming, Cory Ryan 2-1, 0-1 free.
Subs – Daniel Walsh for Torpey, Kevin Lanigan 0-1 for Aidan Waters, Dwaine Fogarty for Danny O’Hanlon, Dean Waters 0-1 for Fleming.
Referee – Sean Lonergan.