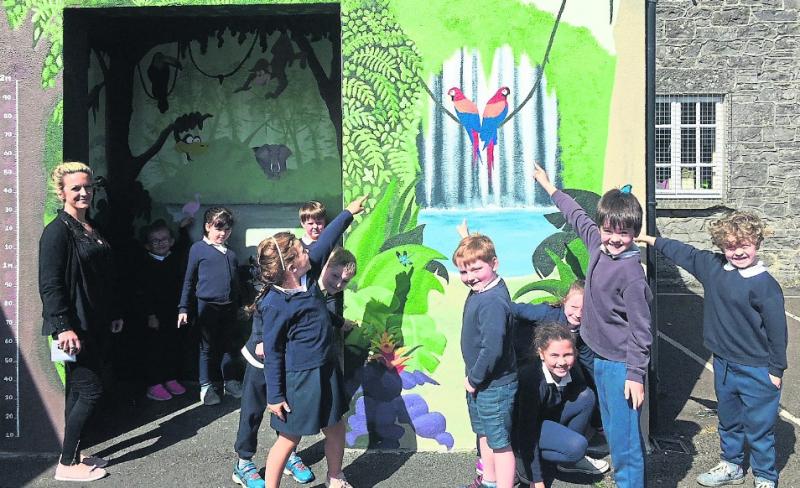 Some pupils enjoying their new surroundings thanks to Georgina's mural in St. Mary's National School

Local artist, Georgina Sweeney, has designed and painted a magnificent mural in the playground of St. Mary’s National School in Templemore.
The project began with design ideas submitted by the pupils and Georgina finally went with a jungle theme incorporating a refreshing waterfall and lake, ruined temple, and meandering dirt track.
What used to be a dismal corner where pupils sheltered on chilly lunchbreaks has now become a tropical paradise, with colourful creatures popping out from behind lush vegetation, parrots perching above their heads and a permanently blue sky.
Georgina took time to explain her approach and techniques to the pupils, with a lesson on perspective and depth using Church Avenue as her example. Each child also got the thrill of doing a little of the painting. The old wooden door became a tromp d’oeil bookshelf, with titles chosen by the pupils who submitted their favourite books. Georgina researched the font used for each title, reproducing them so accurately that the children were enchanted. Sixth class pupils had the honour of choosing a secret animal each to hide in the mural, and researched suitable creatures for that environment. Spot the mosquito, the frog, ladybird and butterfly. She added a measuring bar so the children can have fun checking each other’s height.
This is not Georgina’s first mural, of course. She is well-known in her home town of Templetouhy as the artist responsible for the murals dotted through the village, and has completed private commissions for murals at people’s homes. In the St. Mary’s project she used normal exterior paint from local hardware stores, mixing colours to suit and painting the scaffolding section during the June bank holiday weekend when the playground was free. The children’s imaginations were sparked by the scenes coming to life before them, and Georgina loved to hear their stories about what the animals were thinking and what might happen next. It was a hugely successful collaboration and has brightened up the children’s environment for years to come.