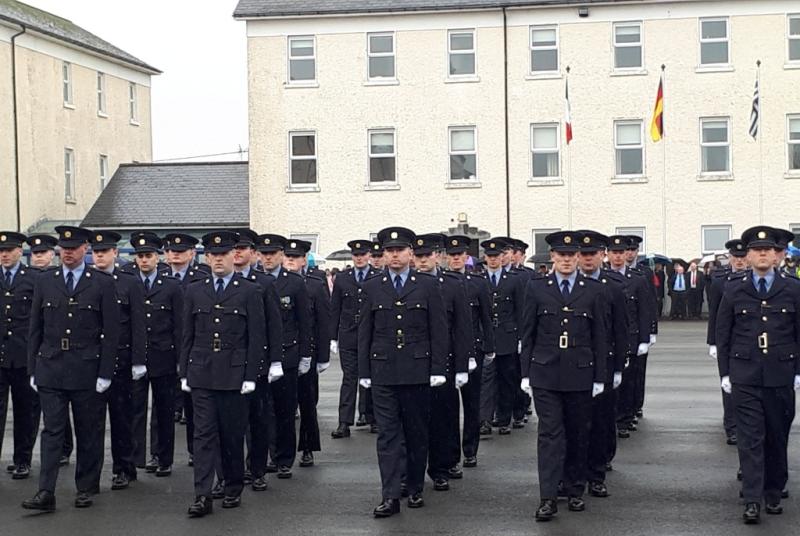 History was made in Templemore Garda College on Friday following the passing out of Intake 183 which saw an additional 46 women take up ranks within the force, bringing the number of female personnel in An Garda Siochana to an all time high.

The graduation coincided with International Women’s Day, some 60 years after women were first eligible to join the gardai.

Speaking at the ceremony Minister for Justice and Equality Charlie Flanagan said: “Twelve pioneering women, of a total 400 recruits, entered An Garda Siochana in 1959. It could not have been easy for women to enter such a male bastion but those pioneers opened the door for others to follow.”

Women now make up 27 percent of the 14,000 strong garda force, bringing the number above the European average for female personnel within police forces.

Among the newly attested gardai on Friday was Upperchurch native Christine Bourke who will be stationed in Portlaoise Garda Station.

The former Dew Valley employee described her time in the garda training college as a “great experience” adding she was eager to take up her role in the Laois/ Offaly division.

“I had the best time here and made a great group of friends,” she said, a point echoed by fellow graduate Aidan Ryan from Thurles who last October captained Thurles Sarsfield to intermediate hurling title victory. 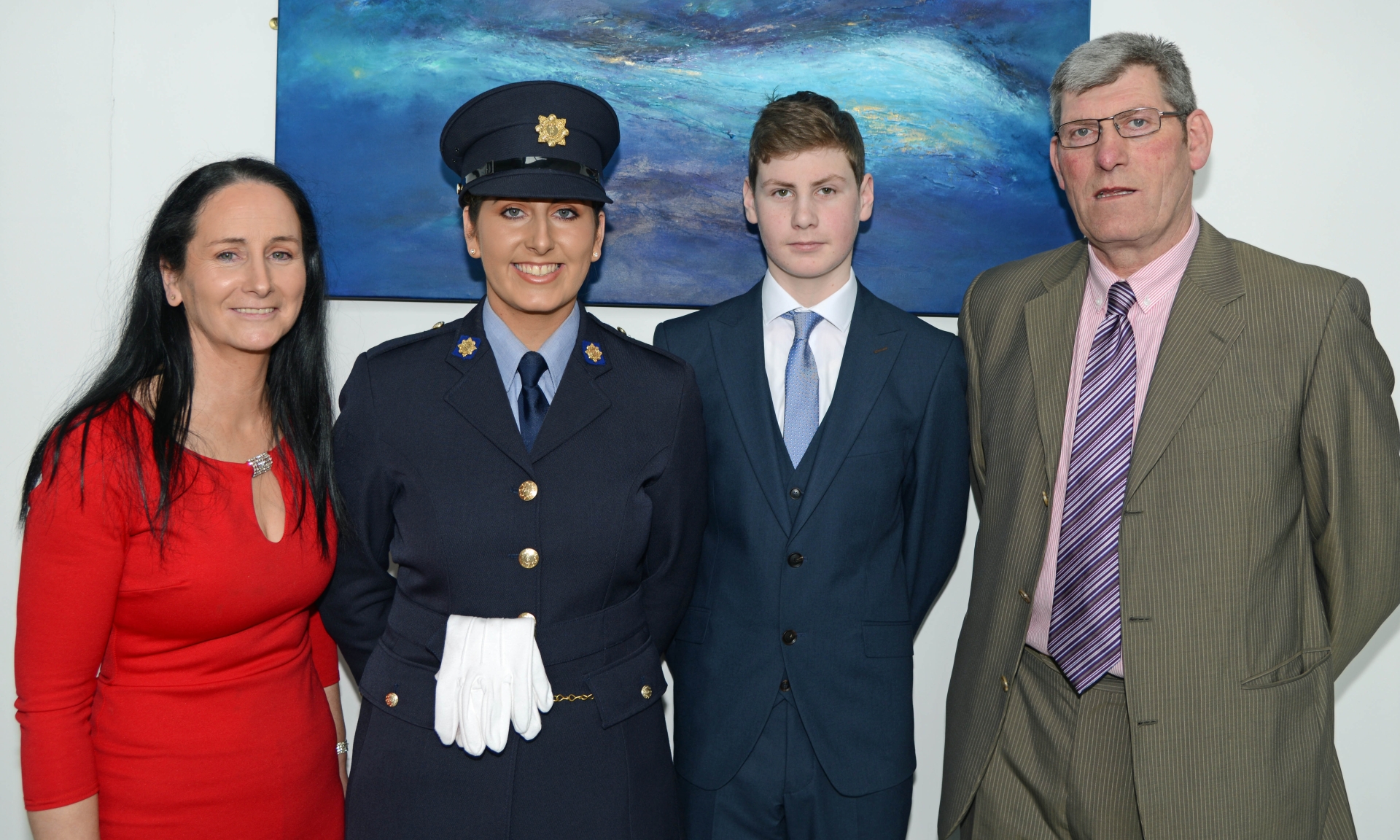 “I worked with Christine in Dew Valley and it was pure coincidence that we both applied for the gardai at the same time and got in. From start to finish the whole experience in Templemore was brilliant,” he added.

Fellow graduate Ryan Price said he had finally realised a lifelong dream by earning his garda badge on Friday.

The Cashel native, who will be stationed in Portlaoise, was one of the oldest recruits attested from Intake 183, and said he had always wanted to join the gardai before taking the plunge last year.

“I was working in the college before I applied so I had an idea of what was involved. I knew it was what I wanted to do and age isn’t a factor once you have the right mindset,” explained the 36 year old who said he hopes to gain experience in community policing in the coming months. 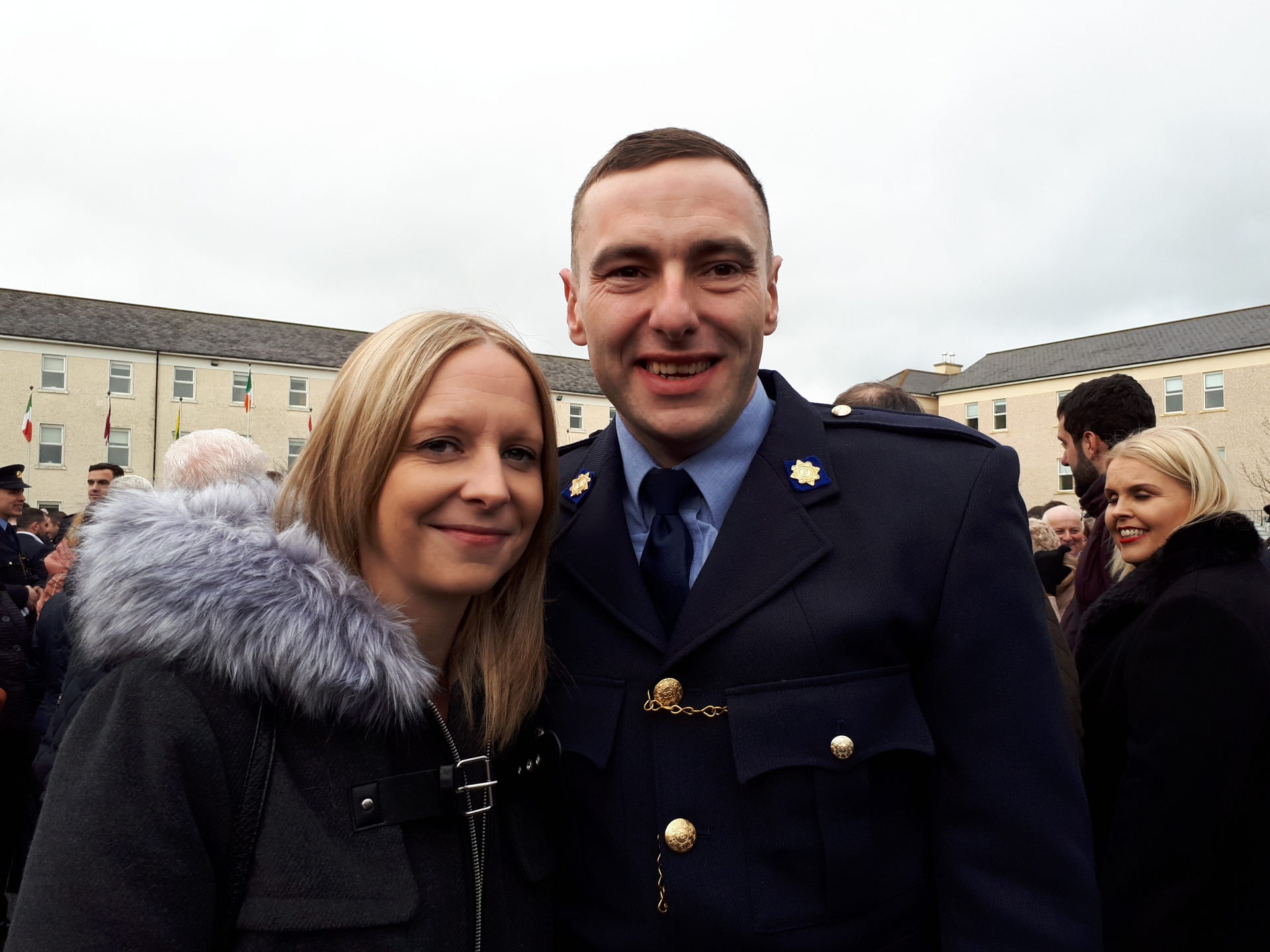 Fourteen of the new recruits were born outside of Ireland including Latvian native Martins Klavins who will be stationed in Thurles.

Garda Klavins, who came to Ireland in 2014, will be following in the footsteps of his father and brother who both worked with the Latvian police force.

The computer science graduate says he hopes to gain experience within the IT department of An Garda Siochana and says his multiple languages (as well as Latvian and English, Klavans speaks fluent Russian) will be an added benefit in his new career.

Macroom native Christin Ni Dheasuna was named the winner of the Gary Sheehan Memorial Medal based on her distinguished academic performance and leadership qualities while studying at the Garda Training College.

Garda Ni Dheasuna, who has been a member of the Irish women’s boxing High Performance team since 2014, will be stationed at Dungarvan Garda Station.

An additional 206 gardai will now take up ranks within An Garda Siochana later this month following the passing out of Intake 183 who commenced training at the college in July 2018.

A total of twelve gardai from Tipperary were among the seventeenth intake to graduate from Templemore having completed their BA in the Applied Policing programme.

However of the 206 newly attested recruits, just four will be stationed in Tipperary, all based within the Thurles Division.

The new recruits are expected to begin their careers as members of An Garda Siochana on March 25, 2019.

This year will see a total 600 new trainees passing out of the training college. 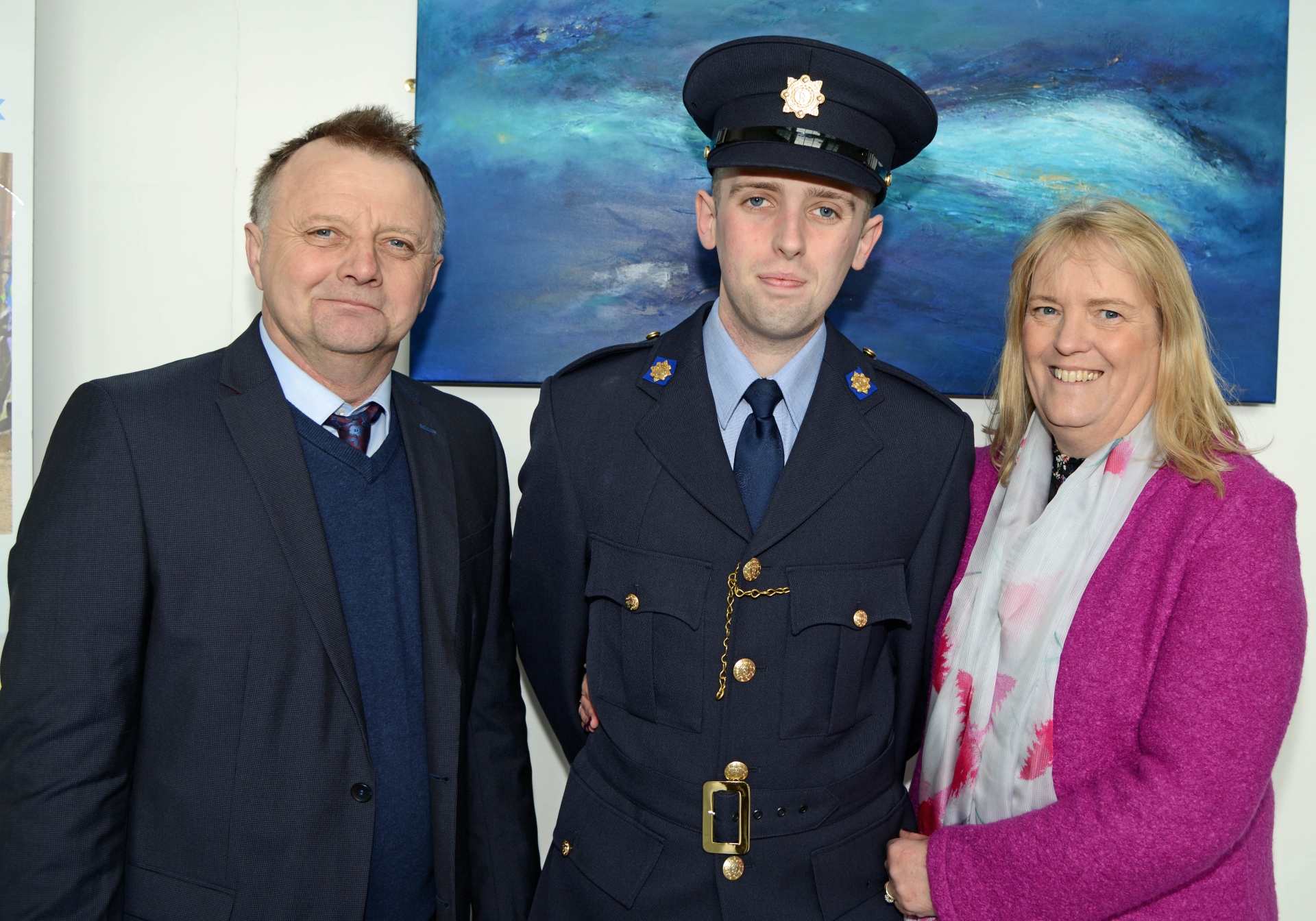 - Aidan Ryan from Thurles who will be stationed in New Ross, Wexford.

- Brian Hennessy from The Ragg who will be stationed in Dundrum, Dublin.

- Christine Bourke from Upperchurch who will be stationed in Portlaoise.

- Ryan Price from Cashel who will be stationed in Portlaoise.

- Thomas Grace from Ballina who will be stationed in Mayorstone Park, Limerick.

- Joseph Shanahan from Templederry who will be stationed in Leixlip, Kildare.

- Neil Costigan from Tipperary town who will be stationed in Donnybrook, Dublin.

- Kevin Slattery from Gortnahoe who will be stationed in Donnybrook, Dublin.

- Andras Leginski from Roscrea who will be based in Irishtown, Dublin.

- Noel Lane from Roscrea who will be based in Carlow.

- Amy Kennedy from Nenagh who will be based in Portlaoise.

- Brian Kelly from Templetouhy who will be based in Waterford. 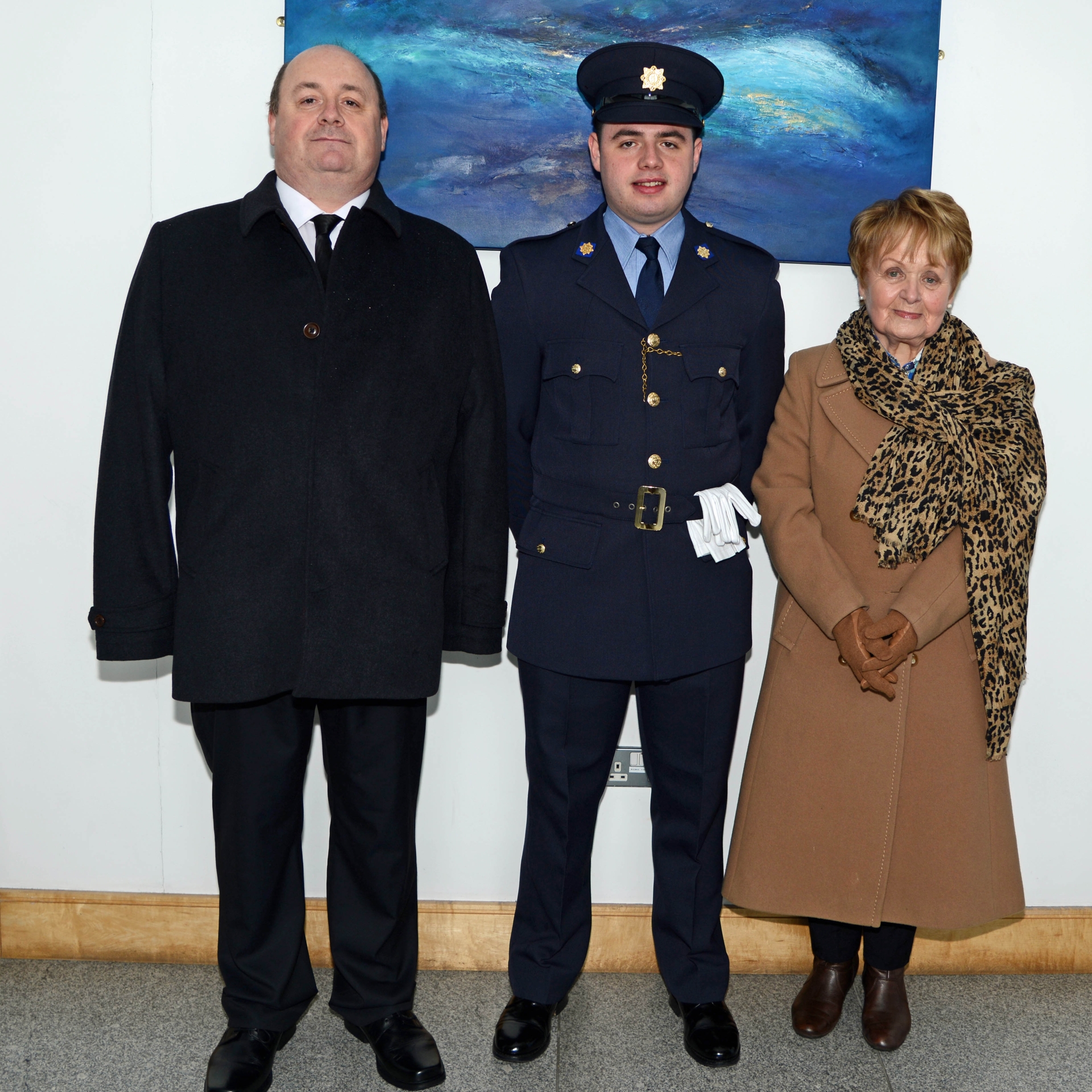 Rory Birmingham, Dublin, with his father Kieran who hails from Templemore and his grandmother Josie who lives in Templemore. PICTURE: Seamus Bourke