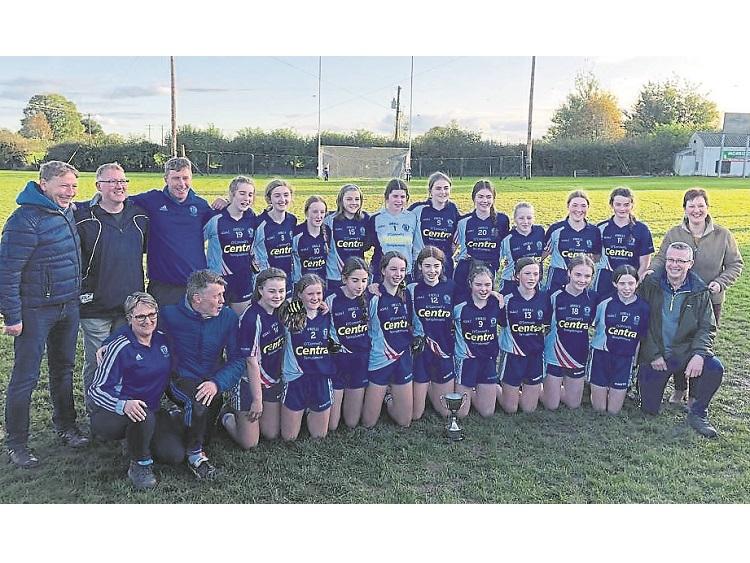 Congratulations to our U14 s (Team 1) who had a decisive win over Clonmel last Sunday to be crowned U14 B County Champions.
This was a very impressive win from this talented group of players. Templemore led from the start and dominated in all areas of the field.
The final score of 5-12 to 3-6 was a just reward for the dedication of these girls throughout the season.
Well done to the management of Mattie Kennedy, Miriam Marnell, Paddy Marnell, Johnny Nevin, Mary Russell and Brendan Hoare who have put in great work with the U14s this year.
Orlaith Treacy accepted the trophy on behalf of the team.
Shona McBride was presented with Player of The Game. (Full match report next week). Thanks to all who travelled and to Finns who catered for the girls on their return to Templemore.
Intermediates - Right Side of Abbeyside!! Last Sunday our intermediate ladies travelled to Mallow to take on the Waterford champions Abbeyside, in the Munster semi-final. It was Abbeyside who opened the scoring after 5 minutes. This was followed by a well taken point by Maria Curley who had worked the ball from the full back line. Katie Bourke was quick to pick up on a breaking ball and found the back of the net.
Abbeyside found form and apart from a Ruth Butler point, dominated the 2nd quarter leading by 1-7 to 1-2 at the break. Elaine Fitzpatrick settled Templemore into the second half with a point from play.
Abbeyside were quick to respond with a point. Templemore found a higher gear – great support play from the backs through mid-field resulted in a 2nd goal from Katie Bourke and 2 goals from Aine Delaney. Templemore were now in control of the game. The introduction of a number of substitutes ensured Templemore's dominance continued.
The Waterford ladies continued to press but the Templemore defence was tight. Aine Greed, Erin Bourke and Grainnne Hennessey were excellent in breaking down the attacks. Special mention goes to Amy Doran for a great performance in goal. Further scores from Katie, Elaine and Neassa Towey sealed a place in the Munster final.
Well done to the entire panel and to management of Alan Kavanagh, Mary Buckley & Margaret Bergin. Thanks to all who travelled to support the ladies - we look forward to seeing you all in Mallow on Saturday 26th!
Table Quiz this Saturday night in Finns at 8.30 – Table of 4 €20.