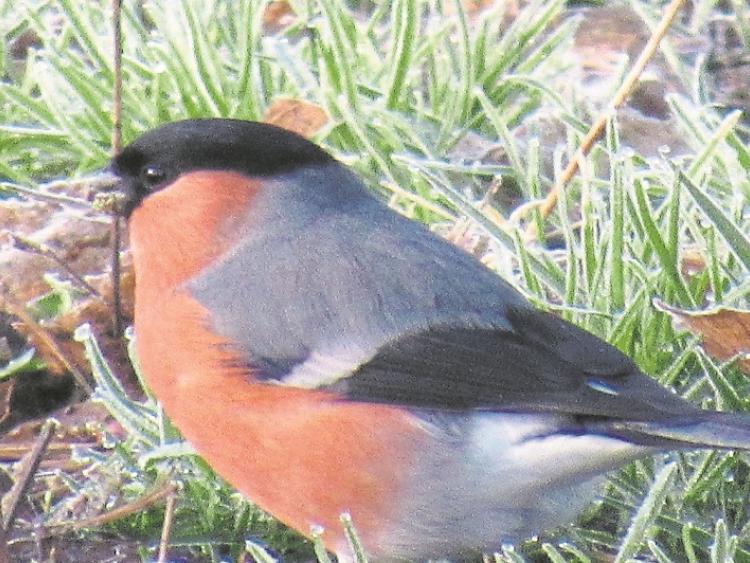 This week Michael O'Brien tells us all about the Bullfinch.
BullFinch, Pyrrhula pyrrhula, Corcrán Coille.
The Bullfinch is the third member of the family of finches that we have in the Town Park.
The male has very strong colouring of a cherry-pink chest, a black crown, grey and black back and wings and a white romp. The romp is very noticeable when the bird is in flight.
The female is a paler version of the male except that the chest and belly are a greyish brown, and the young are similar to the female but with no black crown. They can sometimes be mixed up with the chaffinch which is smaller. They get their name from the bull-like appearance of the short neck and stocky build.
They feed on seeds and fresh buds from native trees and sometimes can be seen foraging on the ground. They will also eat fruit and will come to garden feeders in the wintertime.
They build their nest deep in a bush or tree made from twigs and leaves and lined with moss or hair or dead grass. The female lays 3-6 pale blue eggs with black spots which she incubates for approx. 12 to 15 days. The young will fledge after another 15-18 days. They stay together for a time as a family before the young move away to find their own territory.
They can have two and sometimes three broods in a season.
The bullfinch can sometimes be seen in the ditches around the Pitch & Putt course, deep in the wood itself or in the ditches along the Abbey Road.