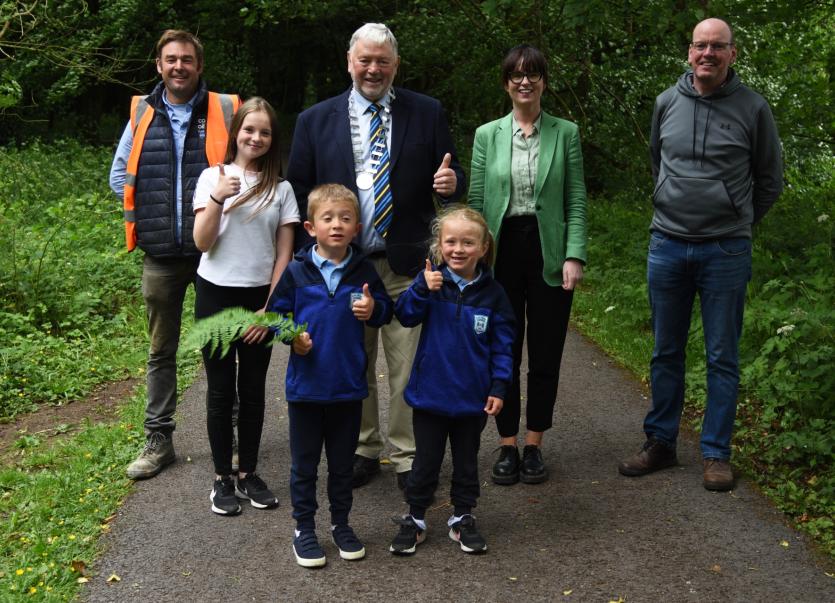 The very successful upgrade involved resurfacing the existing gravel paths and was funded under the Department of Rural and Community Development’s Town and Village Renewal Scheme in 2020.

The Town and Village Renewal Scheme is designed to rejuvenate rural towns and villages throughout Ireland.

The upgrade of this very popular walking route is a project which Cllr Coonan personally advocated for during his term as Cathaoirleach and supported Thurles District officials in sourcing funding under the Town and Village Renewal Scheme.

It was with great pleasure that Cllr Coonan, in one of his last duties as Cathaoirleach, opened the approximately 750 metres of walking routes.

Also present at the opening of the resurfaced walking routes was Keith Naylor of Rathcabbin Tarmacadam, the contractor who was responsible for delivering the project on time and within budget.

Cllr Coonan was delighted to announce that new signage with a map colour coding the different routes and distances will be erected in the coming weeks.

"I am delighted to see this project, which has been very close to my heart, come to fruition.

The Park in Templemore is a wonderful facility for our town, District and indeed Tipperary. It is the jewel in the crown.

I would like to acknowledge the great work done by the Council, the engineers and the staff under the watchful eye of our administrator.​"

"I am delighted to be part of the opening of this walking route in Templemore Town Park. The Park is a wonderful amenity that the people of Templemore are very lucky to have in their town.

I want to thank Cllr Noel Coonan, for the work he has achieved throughout his year as Cathaoirleach, but particularly for this project in Templemore Town Park. Cllr Coonan has been a pleasure to work with during my first 6 months in Thurles Municipal District.

I also want to mention my predecessor Janice Gardiner, along with District Engineer Thomas Duffy and Executive Engineer Jim Ryan, who were involved, along with Cllr Coonan in sourcing funding and delivering this project."