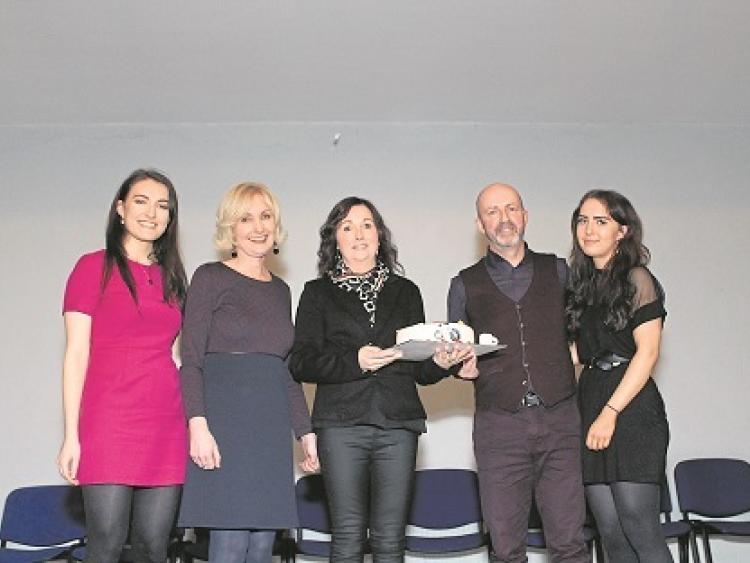 Christy Clancy pictured with members of his family including his wife Ailish, receiving a presentation to mark his retirement recently

Christy has played a major role in the parish of Moycarkey-Borris since he first arrived as a teacher in Littleton in 1990.

The recently retired principal of St Kevin’s National School in Littleton Christy Clancy will be the Grand Marshal at this year’s Saint Patrick’s Day Parade in Littleton.

Preparations for the Parade which takes place at 10.30am on Tuesday March 17 thus making it the first Saint Patrick’s Day Parade in the county on the feast of our patron saint, are well underway. This year’s parade will have a 1920’s theme with all visitors on the day encouraged to turn up in 1920’s dress with a special €250 prize sponsored by Muintir na Tire been awarded to the winner on the day with two runners up prizes also been awarded.

Speaking this week to the Tipperary Star Parade chairman Cllr Sean Ryan said ''We are delighted to honour Christy Clancy  at what will be our 24th Saint Patrick’s day Parade in the village. Christy has played a major role in the parish of Moycarkey-Borris since he first arrived as a teacher in Littleton in 1990. Nine years after he came to Littleton Christy became principal of Littleton NS a role he has served in until January of this year. Every year since our parade began in 1996 he has been involved with the children from the local school as part of a float. A former inter-county hurler with his native Cork Christy has also served as a coach with Moycarkey-Borris GAA and this year is coaching the Moycarkey minor hurling team’. He has also been involved with several drama productions with the students from the school. It was the unanimous decision of the committee to award this honour to Christy.’’

Cllr Ryan added ''All floats and participants are welcome to enter in advance or register on the day and there is no fee for participants. This year’s winning entry will receive €400, with €200 been awarded to second place and €100 to third. We have a number of categories with special trophies and prizes. We are also running a special competition this year for a 1920’s dress. We are asking people to turn up in 1920’s dress with a special prize of €250 awarded to the winner as deemed by the judges’’.
In terms of the organisation Cllr Sean Ryan said ‘’Four independent judges will also be present on the day namely Jim Finn, PJ Harrington, Eibhlin Nevin and Martina Stapleton. There will also be a committee special prize for which the winner will receive the perpetual Pat Houlihan Memorial trophy in honour of the late Pat Houlihan who was synonymous with parade for many years until he passed away in 2012. A special collection will also take place on the day in aid of the purchase of a new defibrillator for Littleton village.’’

The Parade which always proves to be a great day out for families commences on Tuesday March 17 at 10.30am and will conclude by lunch time.
Teas, coffees, hot soup and cakes will be served in the Muintir Na Tire Hall after the parade as a fundraiser by Moycarkey-Borris Ladies football club.
A special night where all the prizes will be presented will take place in Darmody’s Pub in Littleton on Friday March 20 at 9.30pm with music provided by Seanie Mockler & James Doran on the night.