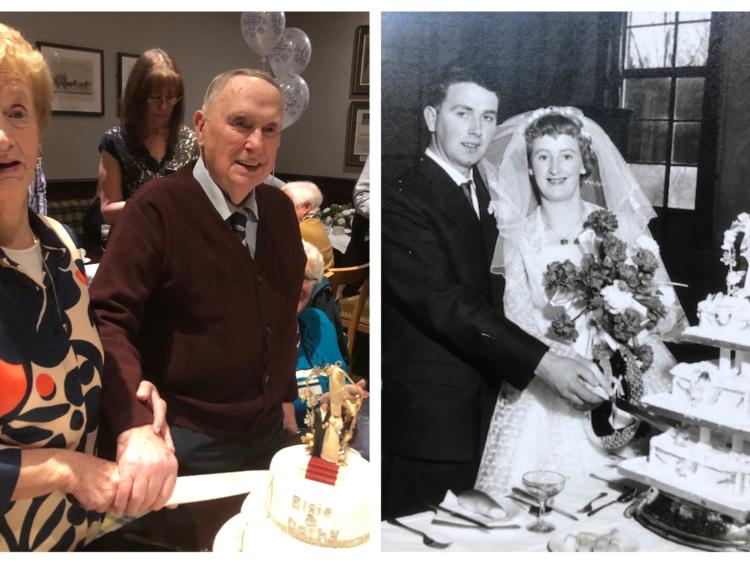 A Thurles husband and wife celebrated a milestone only the luckiest couples get to make, after marking their 60th wedding anniversary surrounded by family and friends.

Jerry and Elsie McAuliffe celebrated their diamond anniversary in style with a party last month, 60 years after walking down the isle at the Church of St Agnes, Cricklewood, London.

Elsie, originally from Knockfuna Templederry, met the love of her life during a short holiday to London in 1958. However when the time came to return to North Tipperary, Elsie says her mind was made up.

“I was staying and that was that.”

While her Cork born husband worked as a carpenter, Elsie got a job in Smiths factory making clocks, describing the period as “one of the best times in my life.”

The young couple tied the knot in front of a small group of friends and family before heading off on their honeymoon to Lancashire.

“They were simpler times back then. There were more people at our 60th anniversary than our wedding,” she says.

Elsie chose her wedding gown by herself explaining that she “liked it and that was all I needed,” adding that the much cherished dress is still safely tucked away at home.

The couple returned to Ireland in 1963 where they settled in Thurles, with Jerry working in the local sugar factory as they brought up their four children Noel, now living in Perth Australia, Gerard, Newport Co. Tipperary, Diarmuid, Glasgow Scotland and Elizabeth now based in Boston.

“We’ve always marked special occasions,” says Elsie , who completed a ‘nostalgia’ tour of London last year, taking in the sights and sounds of her former city.

For their 25th anniversary, Elsie and Jerry returned to London and met with the priest who had married them.

The couple marked their diamond anniversary surrounded by friends and family at the Horse and Jockey Hotel with their children and grandchildren flying in from the four corners of the world to share in the special day.

“I have no regrets in my life. I was very lucky. I have four wonderful children and now nine grandchildren who I get to see every year,” she says.