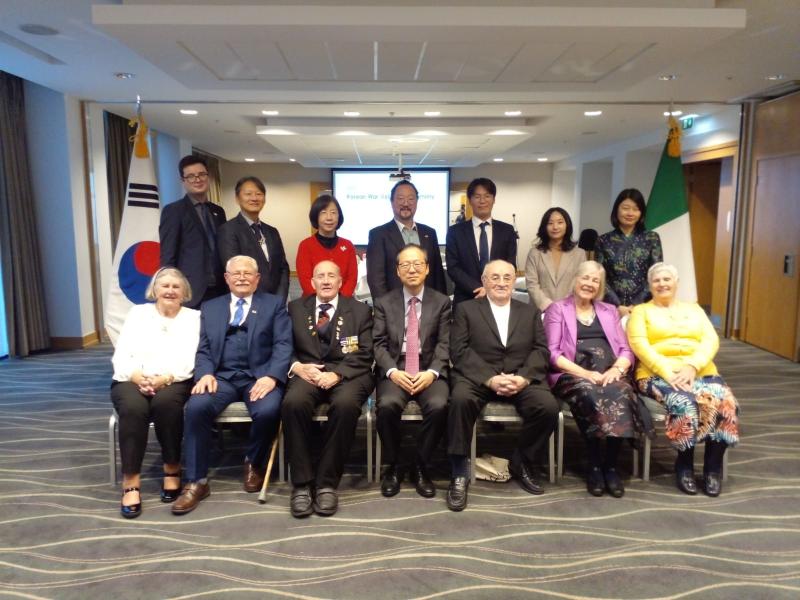 Above: John Wort (second from left in the front) and his wife Brigid (seated far right) pictured at the Korean Embassy where they were guests at the commemoration

The ceremony was attended by Thurles man John Wort, Chairman of the Durlas Eile Eliogarty Memorial Committee and his wife Bridget.

Recently, the Republic of Korea Ambassador to Ireland hosted a ceremony in the Kilmainham Hilton Hotel Dublin for the veterans of the Korean War 1950 - 1953.

The ceremony was attended by Thurles man John Wort, Chairman of the Durlas Eile Eliogarty Memorial Committee and his wife Bridget.

Veterans Mr Ramond Le Gates and Mrs Sue Le Gates; Mr Walter Coote and Mrs Elizabeth Coote; the Principal of the Korean School in Dublin , Ms Son Hak - Sun; the Chairman of the committee for Democratic Peace and Unification in Ireland , Mr. Nam San - gueng; and Ms Min So - Young;, President of the Korean Society in Ireland were also on the guest list.

The ceremony started at 12 noon with Christian Murphy from the orean embassy as Master of Ceremonies conducting the opening remarks. This was followed by a thank you video provided by the Minister for Patriots and Veterans Affairs and speeches from His Excellency Ambassador Ki - Hwan Kweon, Mr Walter Coote and Mr Mr Ramond Le Gates, Korean War Veterans , Ms Min so -young, President of the Korean Society Ireland. A three course meal followed by musical performance by Ms Jae - Won Kim -a recital of the Haegum, a traditional Korean Instrument -the Haegeum makes sound by rubbing the two strings with a bow .

The instrument is played by pressing and releasing the strings hanging vertically to the resonator body and pegs. Eventhough it has only two strings, it elicits a remarkable amount of different expressions through various bowing techniques. Pieces played included Down by the Sally Gardens, In front of the Post Office in Autumn, Amazing Grace ,Danny Boy, Farewell and Remembering my Brother and the Lighthouse.

John Wort told the Tipperary Star: “ It was a very enjoyable afternoon. It was a great honour for Bridget and myself to have been invited once again- our seventh reunion ceremony with the Korean Veterans and with His Excellency Mr.Ki - Hwan Kweon and all our friends in the Embassy and those associated with the Korean people living here in Ireland. They are true friends to me and to the Durlas Eile Eliogarty Memorial Committee. Their commitment and support over the years has been above the call of duty.

“On Behalf of the Committee and the people of Thurles I thank them for their friendship and support,” John Wort said this week.