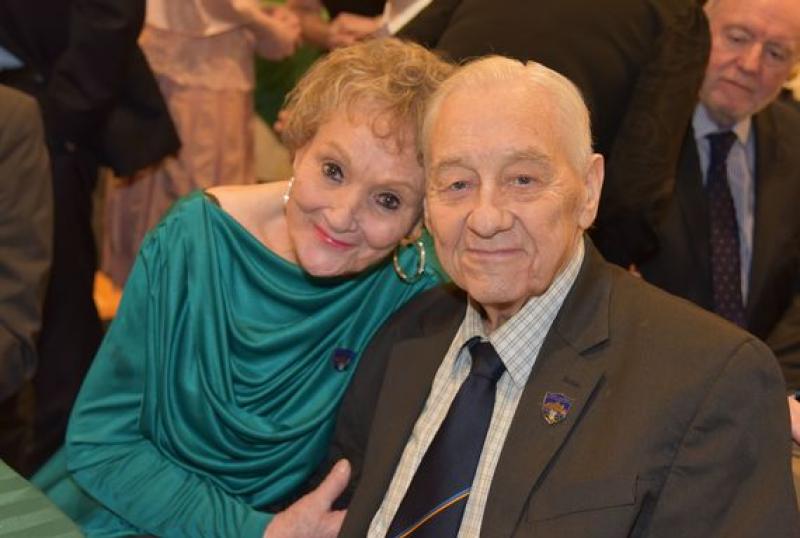 Therese pictured with her partner, the late Fonzie Farrell

The Thurles lady was a legend in Gaelic Park, New York where she volunteered as a nurse for a lifetime

Well known Thurles and Tipperary native Therese Crowe has just spent her first Christmas in the Premier County since she returned home from New York having sepnt 59 years in the Big Apple.

Therese was so well known to all the Irish community in New York, especially for her role in Gaelic Park where she had been the resident nurse for so long, that she ended up patching the grandchildren of players she had previously treated during her formative years. But, after mulling it over for many years, Therese who is 86 years of age and in flying form, decided to move back home – a move she and her partner, the late Fonzie Farrell had spoken on making on many occasions, prior to his untimely death in June 2000.

If the name Therese was mentioned in New York’s Irish community, it was immediately known who’s being referred to, thanks in the main to her work which began at Gaelic Park, right after she arrived in 1962 – in other words, no need for her surname. She had aunts who were nuns in San Antonio but she came to the Bronx on the advice of a friend and it wasn’t long before she found work nursing children, which she had done for a while at home and in England.

“I visited a friend who was having a baby at St. Francis in the Bronx, and a nun came in and saw how I was holding the baby. She asked me if I’d like a job,” Therese recalled in an interview with the Irish Voice newspaper. 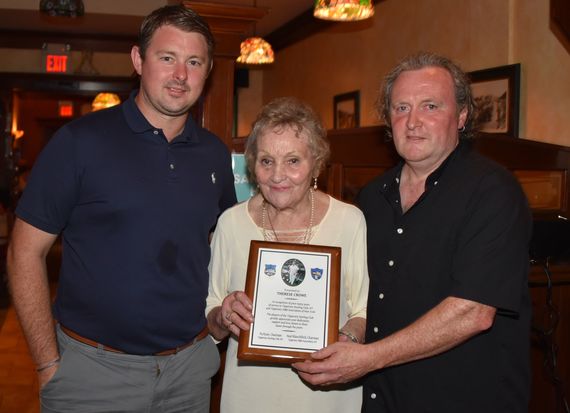 Above: Therese was presented with a plaque to mark her sterling service prior to her deaprture back home to Ireland. Two West Tipp men are at the helmand are pictured with Therese - Pa Ryan, Tipperary Hurling Club President, and Noel Blanchfield, President of the Tipperary Association of New York.

She worked and studied in St. Francis for several years, becoming an infant care technician. Her career eventually took her to the Hospital for Special Surgery where she became an LPN, and then to the Hospital for Joint Diseases in Harlem where she worked and studied to become a registered nurse. And, though she retired as a nurse many years ago, she never quit her vocation to Gaelic Park.

It was 1963 when she went there with a friend and was in the crowd when she witnessed a player from Clare suffering a very serious injury. Therese went down to the field, advising those with no medical expertise not to touch the man. She braced him with “broken hurleys, towels, anything I could get my hands on until the ambulance arrived.” He was taken away and the emergency services were impressed with the job she did to stabilize the player. So too was John “Kerry” O’Donnell, the all-powerful native of County Kerry who held the lease for Gaelic Park for several decades.

“John Kerry asked me for a cup of tea and told me that I did a great job out there. I said, ‘Thank you, sir.’ He said, ‘We’d love to have you here every week.’ And I said yes. 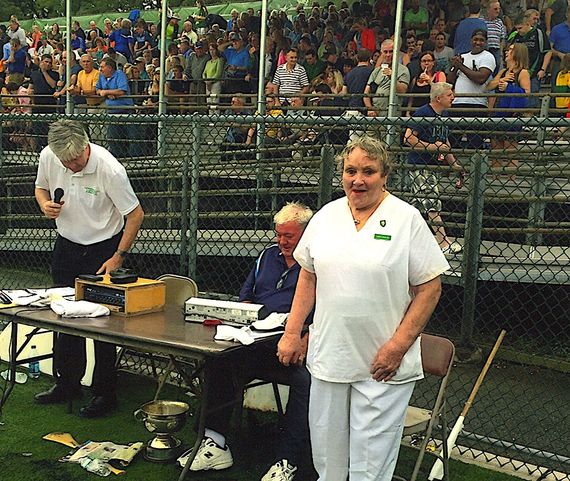 "Then he says, ‘Oh, by the way, you won’t get paid,” Therese recalls. “I was at the park practically every Sunday since, before returning home to Ireland.”

Interestingly, Therese did not grow up in Thurles loving the GAA – she was actually born in Killarney and spent the first couple of years of her life there. But, Thurles came to be her home in subsequent years and Semple Stadium became her mecca.
But, while in New York it was all about Gaelic Park and she particularly loved to see the Tipperary players coming over back through many years. “I loved it, I have to say. I met so many friends. And I know all the faces even though I might not know all the names. All the lads would call me mammy,” she says. “I always think that it is so important to keep our culture and heritage alive in New York, and these brilliant players are doing it.”

Leaving New York and Gaelic Park behind was difficult for Therese, but since Fonzie’s death in 2000, things changed. He was 90 years old, sharp as a tack and they had 30 great years together. They knew each other in Thurles, before Therese came to America, and on one of her trips home, they met up again. He packed his bags and came to live with her and they eventually settled into a home in Leonia, New Jersey.

Fonsie's passing cemented the notion of Therese returning to Thurles, so she packed her bags and made the move to the home she had on the Holycross road out of the Cathedral Town. And, the transition has been challenging but rewarding. She is back living in close proximity to her brother Paddy and her sister Philomena (Lanphier) and has really enjoyed the Christmas festivities in the company of family and friends – it was her first Christmas since her return home, but not her first Christmas in Ireland since she moved to New York.

“I came home every Christmas while my parents were alive, but this was my first Christmas in Thurles in five years. When I would come home for Christmas in times past, everybody would be complaining about the cold, but I was used to sixteen inches of snow and bitter cold in New York, so I didn't mind it one bit in Ireland. It's the same now, I don't mind the weather at all, no matter what it is,” she says.

Before she left New York, legions of her friends gathered at McKeon’s in Yonkers to give her a proper sendoff. She sang a couple of tunes, and received a plaque that will join the many others she has from being the main honoree at so many functions – one of her prized possessions is a photo taken with the great Maureen O'Hara, while another is a picture of Therese and Hillary Clinton.

Gaelic Park looks a bit different without Therese on the sidelines, but she is hoping to swop the park for Semple Stadium and can't wait for the league and championships games to get underway again. But, would she spring into action and help on the sidelines should the need arise? “Anytime,” she says.

Therese was delighted to get her Covid vaccines and her booster as well. But, she confesses: “I hate needles. I don't mind givinig other people injections, but I hate getting them myself – I'm actually afraid of needles,” she says.

Therese Crowe's circuituous route back home right in the middle of a global pandemic could have been a very difficult one, but she is very content and is looking forward to what 2022 will bring. She maintains her links and contacts in New York – well, she did spend a lifetime there – but she is very glad to be home amongst family and friends.

tipperarylive.ie joins in extending a warm welcome back home to Therese – may she enjoy many years on happiness and contentment in her native place.