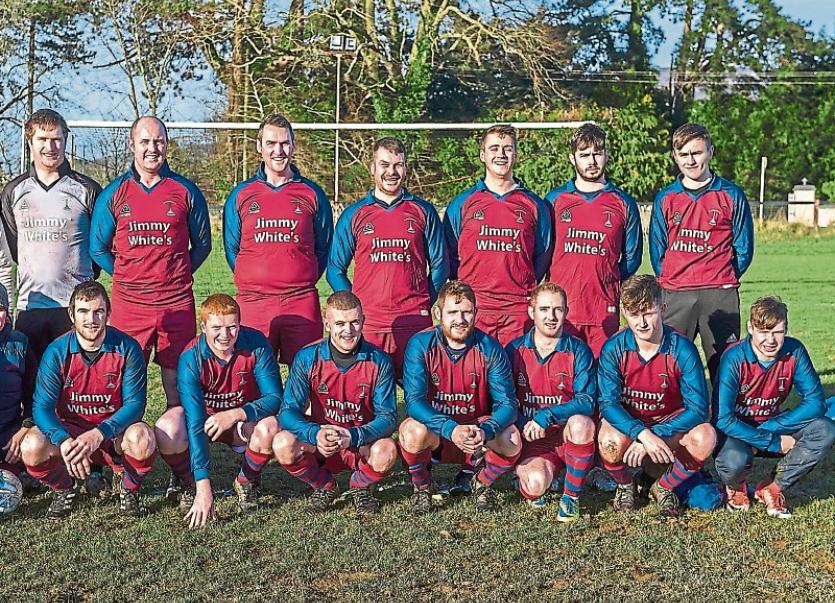 The St Nicholas side who played Kilsheelan United in the Tipperary Cup earlier this year.

SYMPATHY
Sincere sympathy is extended the Coffey and Heffernan families on the death of Josephine Coffey (nee Heffernan) Cappamore who passed away on April 30.
Formerly of Raheen Sologhead, Josephine was pre-deceased by her brothers Paddy and Billy and will be sadly missed by her husband Patsy, sons Seamus, Brian and Brendan, daughter Patricia, brothers Jimmy, John and Michael, sisters Mary, Freda, Shelia, Nellie and Bríd, daughters-in-law Deirdre and Maura, grandchildren Diarmuid, Orla, Ashling, Cillian and Evie, Brothers-in-law, sisters-in-law, nephews, nieces, relatives, neighbours and her many friends.

From a well known sporting family her husband Patsy refereed for many years in West Tipp and East Limerick while Josephine was an avid GAA and camogie supporter with the Cappamore GAA Club and in Limerick.
Following Requiem Mass on Sunday, May 2, in St. Michaels Church Cappamore, burial took place in Doon Cemetery.

CHARITY WALK
This Saturday, May 8, you are invited to support a charity walk at Sologhead GAA pitch walkway with all proceeds divided between Pieta House and the Future for Darragh Ryan Fund which is for a young Sologhead man who is battling serious illness.
Main organiser of the event Eamonn Bargary has a number of interesting items up for auction including an autographed Tipperary Football Jersey and signed photos by Aidan O’Brien and Rachael Blackmore plus other valuable sponsorship items. The walkway will be opened from 5am to 10pm and will be stewarded throughout while supporters are asked adhere to social distancing at all times. A bucket collection will be in operation.

MONARD COMMUNITY HALL
The Monard Community Hall weekly split-the-pot fundraiser resumes this Wednesday evening, May 5, with 50% of the proceeds going to the Future for Darragh Fund. Envelopes are available at Toomeys Shop, Oola Pharmacy or online on Community Hall Facebook page.

ST NICHOLAS FC
The winner of the weekly club 50/50 fundraiser which took place in the clubhouse in Bohertrime on Tuesday night, April 27, was Kieran Ryan (S) who collected €222.
This is a valuable source of income for the club and with entries at €2 each or three for €5 you are supporting a very worthwhile community asset in the parish.
The draw takes place every Tuesday night and entry envelopes can be had at Toomey’s Shop in Monard, from any club officer or player. There is also an online link available.
Like their GAA colleagues they too can look forward to a return to play from May 10 and hopefully some TSDL matches in the months ahead to whet the appetite