Tipperary artist speaks out on fight against patriarchal injustice 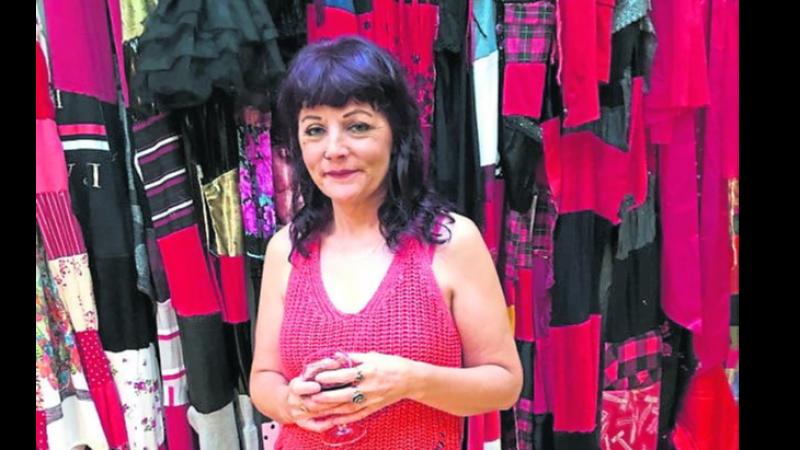 “Women continue to combat patriarchal injustice, it is exhausting but the fight, not just for equality, but the right to bodily autonomy and safety still exists,” said professional practicing artist, Lorraine Cleary, at the opening of her exhibition titled: Vessels of Strength: She – Her – Womb - Warrior, at the Tipperary Excel on Friday last.
Born in Tipperary Town, Lorraine is a part time tutor with the Learning Support Unit in Limerick School of Art & Design and a volunteer with Adapt House Women's Refuge. She is also a member of Tipperary Town Revitalisation Task Force Arts committee.
Her exhibition stands as an emblem for female solidarity and presents us with a spectacle of hand-stitched patches from hundreds of female garments.
The method of stitching is an arduous process and the work took over three years to make culminating in 365 individual ensembles, to represent ‘Her’ fight on each day of the year. Every item of clothing is pre-owned and therefore has an alternative history attached to it. We are not privy to this history but each hand-stitched ensemble attempts to convey to us a story of ‘Her’.

Lorraine is an experimental artist working primarily in sculpture in pursuance of the creation of mini environments centered around trauma in the domestic landscape. She received a First Class Honours Masters Degree in Interactive Media from the University of Limerick in 2015 and graduated from Limerick School of Art & Design with a First Class Honours Bachelors Degree in Fine Art (Sculpture & Combined Media) in 2014.
She was highly commended for the 2014 programme of the Undergraduate Awards in both the Visual Arts Category and the Media & the Arts Category.
She was one of 13 artists chosen to participate at the inaugural international exhibition of ‘Aligned’ as part of the Undergraduate Awards.
Lorraine says that the objective of her current exhibition has been to transform the gallery space by insulating it in a type of colourful perimeter made from female clothes.
BEST WORK TO DATE
“I think that this is my best work to date. In essence this exhibition represents pieces of a woman stitched back together after trauma. It addresses the strength of women as they navigate abusive environments on a daily basis, the home being the place where most abuse occurs. Women become trapped within those walls, the home is essentially a prison of sorts but ‘SHE’ strives to survive and overcome oppression. This work embraces societal concerns and becomes a symbol of ‘the now,’ where women have tirelessly fought against continued patriarchal injustice and becomes a visual response to the determination of the female in her ongoing fight for emancipation within a patriarchal sphere. Now more than ever, at a time when domestic abuse is heightened, women need to unite and stand strong together,” says Lprraine.
Her work has been published in numerous art magazines and has been featured in the Visual Arts Newsletter several times. She has participated in residencies at South Tipperary Arts Centre and at the Tyrone Guthrie and has been awarded numerous art grants from Tipperary County Council Arts Department.
In 2020 she was awarded a bursary from the Arts Council and received a micro grant from the RHA. She has an upcoming solo show scheduled for November at the Ballai Bana Gallery of Culturlann McAdam Ó Fiaich, Belfast, and has a joint show scheduled in Platform Arts Belfast for 2023.
Her exhibition in the Tipperary Excel is now open to public and available for viewing daily. It is a thought provoking ehibition and well worth viewing.