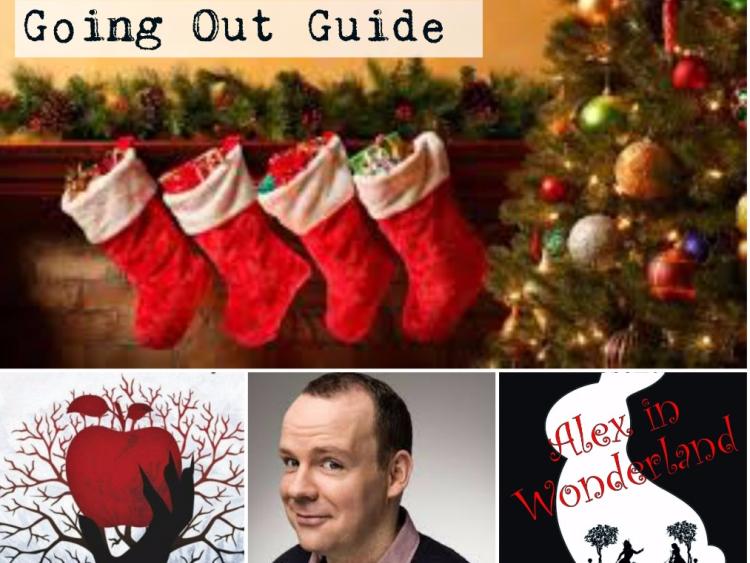 To help lessen any feelings of cabin fever this festive period, we here at the Tipperary Star have compiled a list of top events to get you through this Christmas! From family fun at the Christmas panto, top local bands, national comedians and charity events we’ve got you covered!

Check out the The Mellow Tones, Cloughjordan's new female voice choir, who will present a family concert this Saturday 17 December at 5pm in the Methodist Church, Cloughjordan. The choir will perform a selection of seasonal carols and songs to get everyone into the Christmas spirit! Admission for this event is free, but a collection will be taken for the Living Links charity, supporting people affected by suicide. Audience members of all ages are welcome as well as audience participation during the concert. Venue: Methodist Church, Cloughjordan. Duration: c. 45 minutes

For those looking to go further afield, Christmas at Limerick’s Milk Market has officially just begun with a fantastic line up of events running until December 24th! The ever popular farmers market be in operation this Saturday while Sunday will see Christmas Crafts and Vintage Fashion Fair take over the famous square delighting those in search of something a little extra special! For a full Christmas line up of events check out www.milkmarketlimerick.ie/xmas

Direct from playing Dean Martin in the West End hit ‘The Rat Pack’, Emmerdale star Liam O’Brien presents his original show “Crooning at Christmas” in Nenagh Arts Centre this Saturday December 17th. Now in its 12th year, this nationwide tour is packed full of seasonal hits like White Christmas, Let it Snow, Have Yourself a Merry Little Christmas and many more. The Irish ambassador of swing will take you on a sentimental journey with iconic songs by Bing Crosby, Frank Sinatra and Michael Bublé. A night for every lover of swing and jazz with a world class vocalist backed by the stellar Million Dollar Swing Band. , 8pm, tickets €18/€15

Thurles Cathedral Carol Service will take place this December 18 at 7pm. This year the children’s nativity will be the central focus of the night with each of the youth groups involved (including Thurles Youth Choir, Dwan Theatre School, Thurles Folk Group and the Holy Communion classes) performing individual pieces. Meanwhile the adult choir members will be leading the evening with firm favourites Silent night and O Come All Ye Faithful among others!

Get on those hiking books for Upperchurch Christmas Night Hike!

The annual Christmas Night Hike will take place in Upperchurch this Sunday, December 18 starting from the community centre at 6.30pm. Registration costs €5 for adults and €2 for students while primary school children go free. Complimentary tea and sandwiches will be available afterwards!

Urban Kicks Christmas Variety Spectacular at the Source Thurles
On Thursday December 22 the Source Arts Centre Thurles will be the exciting venue for an evening of dance and song and festive cheer for parents, family and friends of Urban Kicks Dancers. This is a fun and upbeat show allowing the performers to showcase what they have been working on over the past few months, a lot of which is their very own choreography. Featuring some original comedic monologues written by the students themselves, solo vocal performances, Poi and dance routines.Come along and join in the fun! Tickets cost €10 and the show will begin at 8pm.

Get into the festive spirit with Thurles band Seskin Lane this Dec 23!

Thurles’ own Seskin Lane gather together a group of artists and guests for a night of cheer in this special pre-Christmas event. Influenced by Rock ‘n’ Roll, Gospel, Blues, Traditional and Classical music, we can also expect the band to include a seasonal song or two. Start your Christmas in style with this special night. Doors open 8.15pm. Standing and seated event. Tickets €12.

Pantomime Time! Catch Snow White and the Seven Dwarfs Dec 29-31
Get ready for a thoroughly enjoyable performance from a very talented and local cast! And, keep your eyes peeled for a special guest! A great night out for all the family, tickets for this show are a perfect stocking-filler. This is one not to be missed!

Heal those Christmas blues with the young budding actors of Play Youth Theatre as they present this hilarious contemporary twist on a favourite olde tale. This is a show now to be missed! The inhabitants of Wonderland are under threat from the Red Queen while a shocked and dazed local teenager is catapulted into Wonderland to go on a quest with Mad Hatter, White Rabbits and their magical comrades to save Wonderland from the evil wrath of the Red Queen. This adventure is filled with music, laughter and the age old 'he's behind you' of the tradition Panto! A great fun show for all the family. In association with Nenagh Arts Centre, Tipperary Arts Office and the Arts Council of Ireland. Directed by Joanne Quinn and Mary O'Neill

Neil Delamere: Learning to Handstand
Following his sold out show last year, the master of mirth Neil Delamere is back with his own unique brand of his irreverent humour. 2016 was another busy year for the perennially popular star of the Blame Game, which celebrates its 10th birthday on TV this year. With that, a science comedy series for RTE2 and his radio show on Today FM under his belt, now he is back to where it all started, talking to strangers in rooms for money. Thursday 29 December Tickets €24/20 early bird. Show starts at 8pm