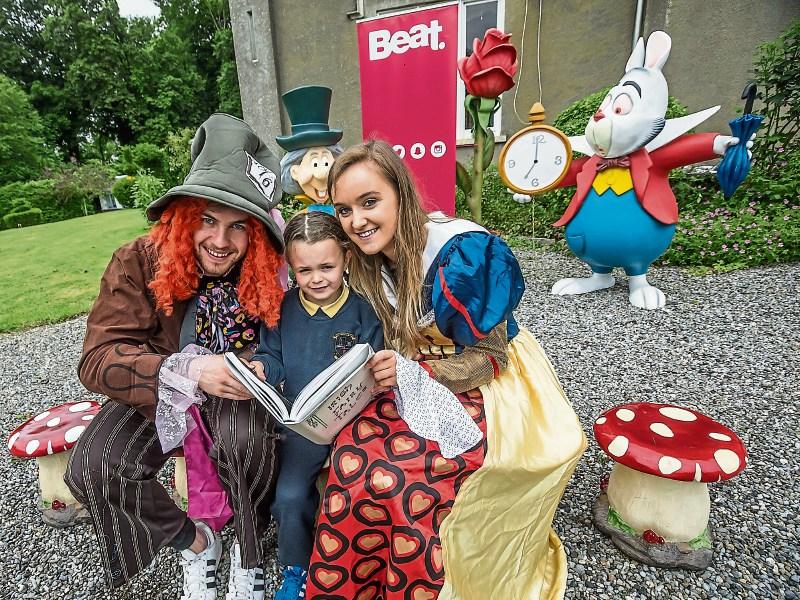 Rachel Meagher from Roscrea pictured with the Mad Hatter and the Queen of Hearts launching the Beat Fairytale Festival at Shankill Castle in Co Kilkenny. Picture: Pat Moore

Following on from its hugely successful inaugural event last year, Beat 102-103 is delighted to announce that its Fairytale Festival will be returning to Shankill Castle, Paulstown, County Kilkenny on Sunday July 23rd from Midday to 5pm.

This magical festival includes a fairy trail, treasure hunt, storytelling from Glinda the Good Witch, sing-a-long with Cinderella, bouncy castles, an outdoor games area with an enclosed arts and crafts section and much more.

Children will also have the opportunity to be ‘knighted’ or bestowed a ‘Princess’ title by a Knight and the Queen of Hearts.  They’ll also get to meet some of their favourite Fairytale friends like Elsa, Anna, Rapunzel, and Snow White.  A variety of South East based Food stalls will also be on site including, for the first time this year, exhibitors from A Taste of Kilkenny.

Chief Executive of Beat 102-103 Gabrielle Cummins says she’s “delighted that Kilkenny County Council has come on board this year as this special event’s exclusive sponsor; it’s an ideal fit as the Fairytale Festival showcases one of the county’s hidden gems; Shankill Castle. I encourage families from all five counties of the South East to come along and get involved in what is a truly magical, fun day outside for all the family.” Shankill Castle is spread across over 100 acres ofbeautiful farmland.  “Even if it’s raining, the children can bring their wellies and we’ll provide ponchos so everyone can get into the spirit of the surroundings!” added the Beat Boss.

A welcome addition to this year’s festival is the involvement of multi award winning Cartoon Saloon.  This Kilkenny based Irish animation studio has been twice academy award nominated for its animated feature films.

The FairytaleFestival’s Event Planner Siobhan Flynn is really excited about this new offering “children of the South East will be able to get up close and personal with these globally recognised animators as they will present their creative animation workshop “Shapeshifters” at the festival & I think we’re as excited as the children about experiencing this creative team at work!”, concluded Siobhan.

Shankill Castle is situated on a romantic setting near the ruins of an old church surrounded by mystical, ancient trees and manicured gardens boasting red tulips and pear trees.

While the house itself is not part of the Fairytale Festival, it will be open on the day for guided tours by the owners, The Cope Family, who will also provide wand making classes, by appointment only and spaces are limited.  The wand making will be a separate nominal fee and can be booked separately online.

Tickets for the event are €15 per person or €50 for a family of four and can be purchased online through www.beat102103.com.