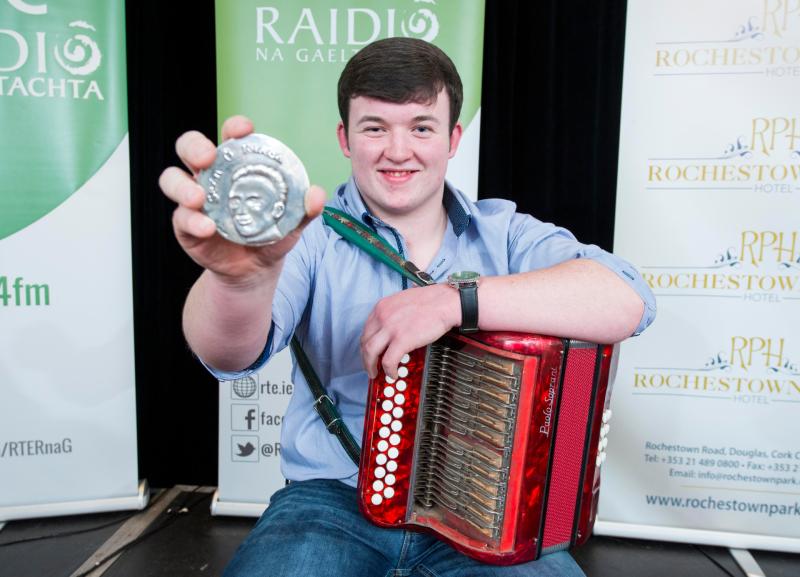 The final for the award was broadcast as a live concert on RTÉ Raidió na Gaeltachta and was presented by Peadar Ó Riada. This year it was concertina and box players who competed for the prestigious traditional music prize.

Sixteen year old Keelan is the youngest ever winner of the prize having previously qualified for the final when he was twelve. However the Borrisokane Community College student is no stranger to winning prizes having won the All-Ireland under 15 title two years in a row, and last year he took home the Under 18 title in his first year to compete in that category at Fleadh Cheoil na hÉireann in Ennis.

The talented musician has been playing music for eight years, tutored by Ned Kelly, who he says has been a great influence alongside his family including his four siblings who all play music and his father Brendan who is a keen banjo player.

“There was a brilliant standard of music, so I was surprised but delighted to win. I can’t really believe it. I’d like to thank Ned Kelly, Bunny Keogh and Tom Lawlor for all their support, and Mammy and Daddy and the family," said Keelan following his win on Friday night.

Keelan will soon be heading off to Luton to play at a St Patrick’s Day festival with the band Rigs and Jeels, made up of young musicians from Tipperary.