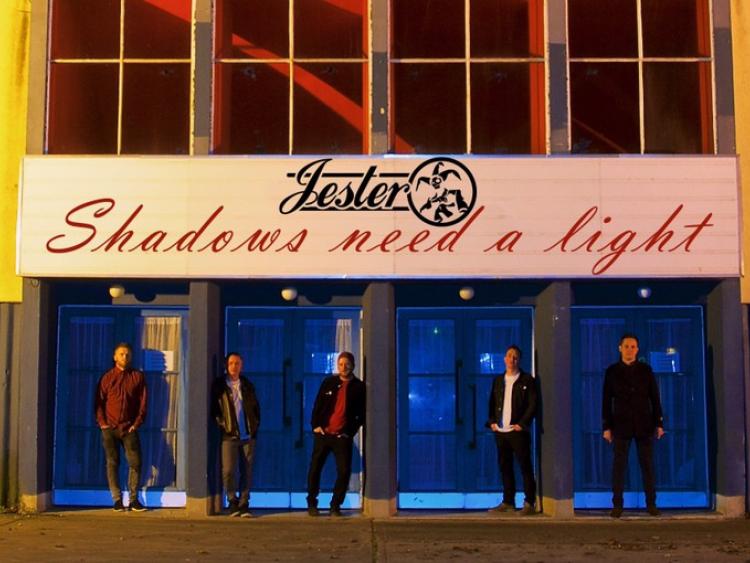 There’s always a light at the end of the tunnel says Tommy Maher, one fifth of Tipperary rock band Jester ahead of the launch of their debut album, Shadows Need a Light, this weekend in their hometown of Thurles.

In less than 12 months, a band which was on the cusp of “packing it in” has seen a dramatic change of fortunes straight out of a Hollywood movie script.

After catching the attention of independent UK record label Velvet Moron Records last June, the band immediately went to work in the studio laying down tracks from their extensive back catalogue for their debut record.

Soon after signing to Velvet Moron, Jester were then added to the bill for Electric Picnic and closer to home the group were also added to the bill at Féile Classical, as well as headlining a number of shows themselves throughout Ireland and supporting acts including The Stunning and Britpop legends Cast.

“This time last year was a very different story. We were looking at packing it in and then we signed with the label and one thing lead to another from there,” Maher tells the Tipperary Star just days before their sold out gig in the town.

The aforementioned album, Shadows Need A Light, has been a labour of love for the five piece who formed during their school days in the early 00's.

The eleven track album spans a body of work stretching back over the past six years and features songs such as lead single In the Meantime, Sea saw and Little Run Down, the latter Jester band mate Tommy Maher name checks as his favourite from the LP.

“That song probably got the biggest reaction of all the songs we’ve released so far and I felt it resonated with a lot of people. Its an uplifting, positive song,” he explains.

Although written over a six year period, Maher says the album is tied together through a common theme, with mental health awareness featuring heavily.

“It's a bit dark in places but ultimately the album is uplifting,” he says.

Their most recent single In The Meantime has already received significant airplay on national airwaves including Beat 102 103 and KCLR96FM, as well as being named Joe.ie’s Song of the Day.

While tickets for the Source gig sold out in record time last month, the album will be available to download from Apple Music and streaming platform Spotify from Friday, March 15.

Jester - Shadows Need A Light is out March 15 on Velvet Moron Records.