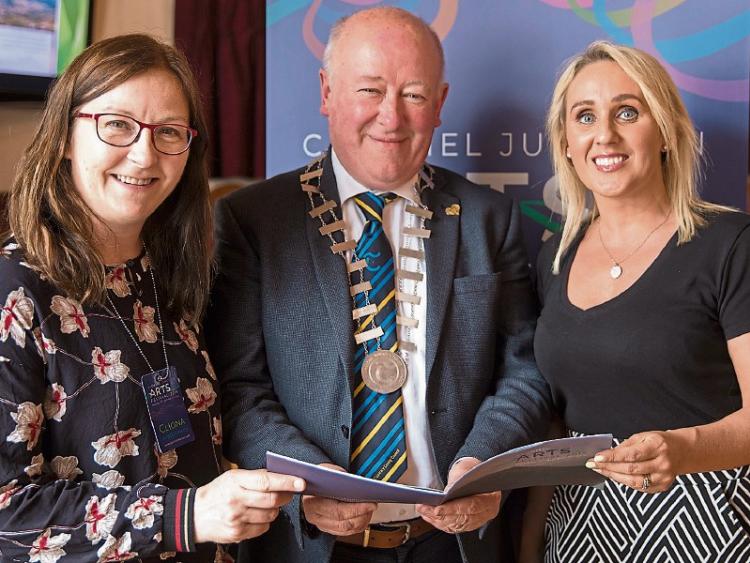 This year’s theatre lovers have a wealth of shows to choose from at the Clonmel Junction Arts Festival with acts from far afield  complemented by talented local companies.

“One of the important functions of an arts festival, especially when the funding we receive is the largest block of arts funding that come to Tipperary as a county, is to provide a platform and showcase for local artists”, said festival director Cliona Maher at its launch.

“We’re doing this in music and in visual arts, and going forward, we intend to produce theatre also, so that work that’s site-specific and rooted in Clonmel is being created especially for the festival”, she said .

The White Memorial Theatre will be a hub for theatre as well as for music, with a much-anticipated new show from local artist and performer, Des Dillon.

Nóta Stóta is a completely original blend of pookas, polkas and puppets, featuring traditional music played by Benny McCarthy and Conal Ó Gráda and set firmly in the world of the fairies.

A hilarious new play Brendan Galileo For Europe by Fionn Foley blends the worlds of the European parliament and the Eurovision. It was winner of Best Performer and Bewley’s Little Gem awards at the Dublin Fringe Festival.

This year’s offering at Hickey’s Café will by Strolling Through Ulysses!, with Robert Gogan taking audiences on a journey through the curious events and quirky characters of Ulysses, in a show that is bawdy, irreverent and great fun.

Julie Sharkey is an actress familiar to Junction Festival audiences from her many one-woman shows at Hickey’s Café and she features in Remember To Breathe, by writer and director Orla Murphy, telling the story of a Tipperary father (Raymond Keane), daughter (Liz Fitzgibbon and a Kiwi swimming coach (Julie Sharkey) with the action moving between Christchurch, New Zealand and the Golden Vale.

Coming to Tipperary from New Zealand are celebrated theatre company A Slightly Isolated Dog, who bring their Edinburgh hit show Don Juan to Clonmel before a UK tour.

With lots of brilliant physical comedy, twisted pop songs and explosive wit creating a hilarious and irreverent show, this will be a treat for Clonmel audiences in the special festival venue Cider Rooms Cabaret, a specially created intimate cabaret space behind The Coachman.

Also at the cabaret will be Two, by local company Down The Rabbit Hole. The classic play by Jim Cartwright shines light on the medley of stories that one Irish pub can hold over the course of an evening.

This Clonmel-based theatre company was founded by Amy Hill, who has worked as a professional actress for many years, appearing in numerous stage productions and TV/film, most notably RTE’s The Clinic and Michael Lavelle’s critically acclaimed film Out of the Blue.

Produced for Clonmel Junction Arts Festival, The Secret Garden at Raheen House Hotel is an hour-long Land Art trail for families who will encounter a storyteller, a puppeteer, and a musician along the way before making their own take-home piece of art from natural materials.

Raheen are offering an afternoon tea package to accompany the performance, making this an ideal family afternoon out.

It is a huge honour to be part of this year's festival.

Speaking at the Town Hall launch, director Jack Reardon said “This is such a testament to the work done by the cast and creative team of The Fight. I’d like to thank the festival for acknowledging of the standard of work Stagecraft creates and inviting us to be part of this year's programme.”

Tickets are on sale from the Festival Box Office, located at Showgrounds Shopping Centre on the Davis Road. The box office is open for tickets and festival information from Wednesday June 5th. Contact boxoffice@junctionfestival.ie or 087 382 3000 for details.