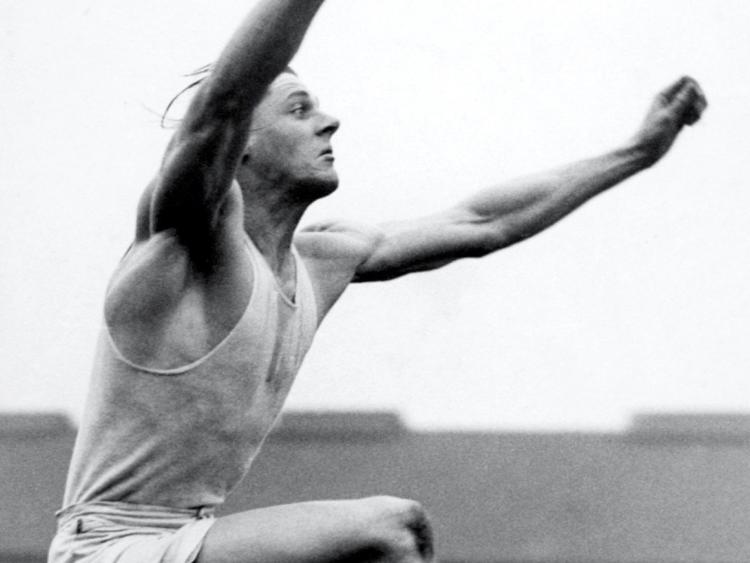 Laochra Thar Lear (Heroes Abroad) celebrates Ireland’s significant Olympic achievements in the first sixty years of the modern games, from almost accidental wins in tennis in 1896 to an Olympic record-breaking run in 1956.

But Ireland’s Olympic story is about more than just sport. It is a story of politics, colonialism and partition. It is also a story of lifelong friendships, national pride and victory against all the odds.

Featured in this documentary is one of Ireland’s greatest Olympians Tipperary man hurdler Bob Tisdall.

Bob Tisdall was born in Sri Lanka to Irish parents. He returned to Tipperary to attend primary school and after secondary schooling in a boarding school in England he attended Cambridge University.

Tisdall first came to international prominence representing Cambridge in the annual match against Oxford.  He was elected President of the Cambridge University Athletic Club (CUAC) for the 1930-31 season and in March 1931, in the varsity match with Oxford, he performed what the Irish Times at the time described as ‘one of the most amazing feats ever accomplished at any athletics meeting.’

After graduating from Cambridge, he worked as an aide to a young Indian Maharaja but he realised that if he wanted to make it as an athlete he would have to give up his job, which is what he did.

He wrote to Eoin O’Duffy who was in charge of the Irish Olympic team for the 1932 Los Angeles games and asked if he could represent Ireland. Although he failed to qualify at first, he was eventually selected to represent Ireland in the 400m hurdles.

Bob Tisdall had slept badly on the trip across the United States and his lack of experience over the 400m hurdles caused him some anxiety. He opted for rest and sleep on arrival in LA and trusted his ability ‘to stride the hurdles evenly when the time came’ and placed ‘more reliance upon skill and experience than upon mere physical strength,’ as he explained in his book The Young Athlete.

Tisdall opted to spend fifteen hours a day in bed and for eight days refused to put on running shoes or to ‘run a yard’. Three days prior to his race, he began to run gently in his bare feet on the grass.

This unorthodox approach combined with the Irish team’s masseuse, Tommy Maloney’s ‘wonderful method of massage’, using a mixture of olive oil and poitín, ensured that Tisdall walked on to the track for the first heat of his event ‘so full of energy that even to remain walking was a restraint’.

Bob Tisdall, superbly fit and relaxed, stepped on to the track of the LA Coliseum on Sunday 31 July to contest only the fourth 400m hurdle race of his career. Tisdall raced to a comfortable win in a time of 54.8 in the second heat.

The semi-final was scheduled for two hours later and Tisdall returned to the Olympic Village and went through his trusted regime of rest and recovery. He had a light massage, drank a glass of milk with two raw eggs, followed by a cup of tea laced with sugar.

Then he lay down for an hour taking care to remain wide awake and not to become drowsy. This habit of lying down ‘completely relaxed’ was an ‘excellent tonic’ for Tisdall and he returned to the Coliseum ‘feeling like a racehorse.’

Tisdall was again a comfortable winner and equalled the new Olympic record (52.8) set minutes earlier by Glenn Hardin (USA) in the first semi-final. The semi-final performance was extraordinary as he visibly slowed after clearing the second-last flight of hurdles and long before Usain Bolt made it his trademark, he jogged to the finishing tape.

The 1932 Olympic 400m hurdles final assembled one of the strongest fields in the history of the event and was graced by the presence of four men who held the Olympic title at some stage of their varied careers.

F. Morgan Taylor, the world record holder (52.0) and the Olympic champion of 1924 and bronze medallist of 1928 was contesting his third successive Olympic final. Lord Burghley, the outstanding British all-round hurdler, was the reigning Olympic champion.

Twenty-two year old Glenn Hardin, who was to win the 1936 Olympic title in Berlin, was the rising star of the event and the favourite.

The Olympic final was held at 3.45pm on Monday 1 August 1932. Tisdall prepared meticulously in the hours before the race taking special care to ensure that he was properly hydrated. Tisdall ‘never before felt so gloriously fit’ on the starting line. He was drawn in lane four, ran superbly and as he approached the final hurdle, he held a lead of about five yards. Tisdall mis-timed his approach to the final hurdle, hit it with his leading leg and according to his own account stumbled forward for five or six yards.

Disaster was averted however and Bob Tisdall crossed the finishing line in a new world record time of 51 minutes and 7 seconds. Under the rules of the day, Tisdall’s world and Olympic record time, and the first sub-52 seconds in the event’s history, was not allowed becuase he had knocked a hurdle in the course of the race but Tisdall was still the Olympic champion.

‘Two months before’ wrote Eoin O’Duffy, he ‘was unfit and raw – now the world’s champion. This was the grandest athletic feat ever achieved by an Irishman.’

Tisdall was a remarkable athlete, gifted with an extraordinary natural ability that was honed to perfection by Alec Nelson’s coaching and his own meticulous attention to detail.

After winning his race and being congratulated by his friend and teammate Pat O’Callaghan, Tisdall helped O’Callaghan file the spikes off his shoes and go on to win Ireland’s second gold medal that day in Los Angeles.

Laochra Thar Lear will air on Wednesday, December 23 at 9.30pm on TG4.