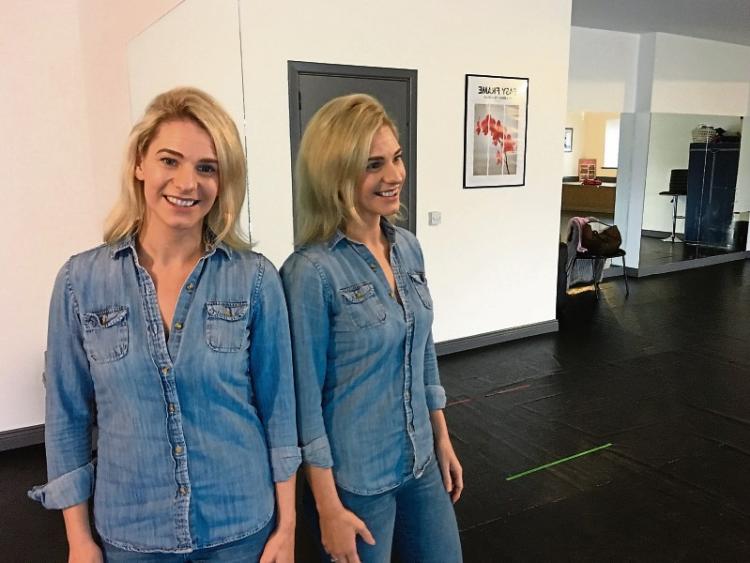 Still dancing: Bernadette Flynn loves passing on her skills to the next generation of Irish dancers

The staccato sound of dancing shoes battering on the floor echo down from the first floor studio of world renowned Irish dancing star and teacher Bernadette Flynn.

Inside her studio on Kenyon Street, Nenagh, pupils get in some last-minute practice before heading off to a feis; others are being measured for costumes on the stairways while mothers and grannies — it seems to be all women —  call to collect their young charges.

Despite a gruelling day of putting her students through routine after routine, Bernadette is a bundle of energy - her bright, blue eyes, as full of dance as her feet.

The former star of Michael Flatley's Lord of the Dance, who now runs the Flynn O'Kane Academy of Dance with her husband Damian, just loves passing on her skills to the next generation of Irish dancers.

“Absolutely. I love teaching. I have never said in the eight years, put me back in the show. I had my time because we were 15 years in the show and I was happy to leave it. I love this,” she says.

Daughter of Andy and Mary Flynn, who ran Andy's bar on Sarsfield Street for decades before selling up, Bernadette herself was born to dance, starting at the age of four with Marie Hogan from Newtown who ran classes in the old town hall.

“I was with Marie for a good two or three years but I started my competitive career with Doreen Browne from Roscrea,” she recalls.

That competitive career brought her a myriad of Munster, national and world medals. She won the first of her nine Munster titles at the age of seven.

“I had seven All-Ireland championships and six world championships. My compet- itive career was from age seven to 16,” says Bernadette.

The world of dance had been overwhelmed by the success of Riverdance and, with Flatley leaving the show, it was inevitable that there would be a follow-on. When it came, the shy girl from Nenagh was on the wanted list.

“I was approached by Marie Duffy Pask to audition for a secret show that was being created by Michael Flatley. Riverdance had been kept to one school in Dublin, but they went around the competitions and you had the pick of dancers. It was whittled down to about 35 dancers and they were picked to be the original cast of Lord of the Dance so that was the start of something massive,” she recalls.

The show was so secretive that they were forbidden to talk about it, even to their families, so when she hit the stage at The Point theatre on opening night, her parents were stunned to find her in the lead role. It was not something she had been picked for — getting top spot had evolved as rehearsals played out.

“The other leading lady, Gillian Norris, and I were the youngest in the show, so did not go in as leading ladies. We trained to make up the routines as a troupe. We trained with Michael. Show dancing for us was alien. We were trained competitively - everything was hands by the side. We were shy. We were young Irish kids that didn't have a taster of what was going to happen,” she says.

“He would say to me: ‘Keep dancing and create something’, so that's how this whole scenario came along and suddenly myself and Gillian were cast as the two main female leads,” says Bernadette, who played Saoirse, the Irish Colleen, while Gillian  danced the lead role of Morrighann the Temptress

While she doesn’t think anybody was going to realise what was going to snowball after that opening night in Dublin, it turned out to be something special.

“It was massive. We did the Dublin run and then on to London for about four to five weeks and then we hit the States and that is when we performed at the Oscars.”

Recalling the Oscars, she says: “There is an Irish dance show doing a piece at the Oscars. You kind of pinch yourself.”

So what was it like for a young Irish girl from Nenagh hitting the heights?

“I was literally going from Transition Year into living on the road and travelling, staying in hotels and at the gigs every night. Now you can speak of it with nostalgia. You can look back and say: 'Oh my God, it was just incredible.' You lived through the excitement of it and it was just so exciting. Damien and I look back and say how lucky we were. We hit it at the perfect time and we were very lucky because we were at the right age. We got the best out of it.”

She stayed with Lord of the Dance for 15 years and found Michael Flatley to be “tough as in that he demanded perfection, which I think is good. It drives you to be the best you can. There is nothing scary about hard work.

“I think it has given me everything that I am passing on to the kids.”

During that time, she remained grounded, she thinks, because there was an innocence to life.

“When we first started there wasn't social media. We didn’t get to promote ourselves as stars. It was just the newspapers and television.”

And there were also the visits back to her family and native town.

“I think coming home to mum and dad, that is the person you are. Even through my competitive career years you were always kept grounded. I would go home and help my mam in the B&B or help out at home,” she says.

However, she says that while her parents are “extremely proud” of both her achievements and that of her brother, the theatre director Andrew, “they never put us in there to drive it. It just kind of happened.

Would she like to work with Andrew in a show? “I'd love to do a show with Andrew, but he is too busy. It would be so cool. He'd probably just get me to do a scene in Dancing at Lughnasa, but it would be nice,” she says with a laugh.

Despite still travelling abroad for work, Bernadette remains firmly rooted in Nenagh and her family.

“Work is great but you need family. I think I'll be coming into the studio on my walking stick.”

However, while she doesn't miss the bright lights, she would love ot go back to revisit the start.  “I’d love to go back one more time and have an overview. It was amazing,” she says, with fondness.