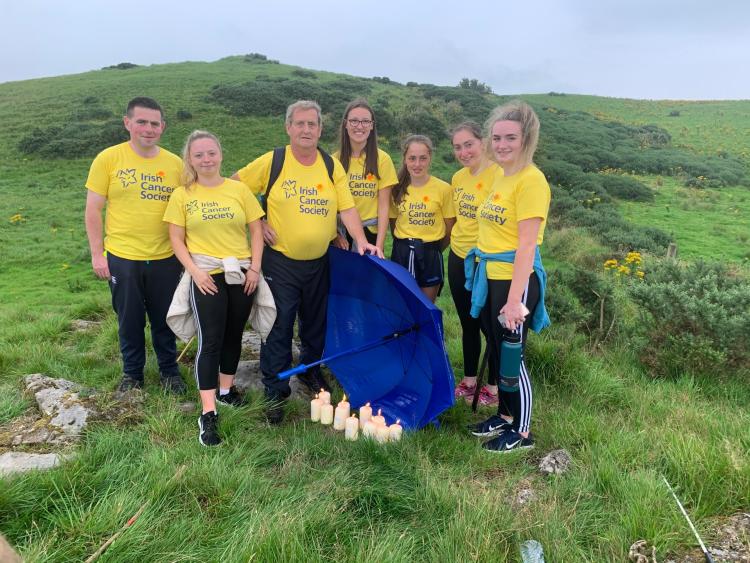 Over a five year period Mike O’Donoghue’s Coffee Mornings have raised a staggering €23,345 for the Irish Cancer Society and thanks to a novel fundraiser last month, the group behind the annual event have increased their overall tally to €34,490 for the charity.

On August 15 and 16, Mike, along with Saoirse Corbett, Tara Campbell, Aine Looby, Ellie Phelan, Sarah Dillon and Maurice Barrett braved the elements during an all night sleep out and completed a 24 hour fast to raise the impressive sum - however the group say they are not finished yet and have moved the goalposts on their fundraising target until September 13 to raise as much money as possible for the Irish charity.

The initial €7,000 target was reached by 4pm on Sunday, August 16 and since then the tally has continued to climb reaching an impressive €11,145 this week. The group are now intent on hitting the €11,500 mark within the next fortnight.

“I don’t care where you travel in Ireland - you would not find a bunch like them,” Mike says appreciatively of his close knit team.

As well as raising vital funds for the Irish Cancer Society, the event also marked an important milestone for the annual Cashel & Emly Pilgrimage to Lourdes.

On Saturday, August 15, Mike and his committee, along with a handful of local supporters, gathered at the grotto in Nicker church to say prayers to mark what would have been the 50th anniversary of the Cashel & Emly trip to Lourdes.

Tealights set out two meters apart across the grounds acted as markers for those present to safely socially distance while the rosary was led by Fr. Jimmy Donnelly.

On the night candles were lit by a number of volunteers linked to the pilgrimage including Dr. John O’Brien who lit the first candle to honour everyone who could not go to Lourdes this year. Sarah Dillon lit the second candle for everyone in the community of Pallasgreen, a third candle was lit by Denis Vaughan to remember all those who have died by suicide, Ellie Phelan lit the fourth candle to honour all frontline workers and the final candle was lit by Saoirse Corbett for all those who have been affected by cancer.

“It was great to be able to mark it in some way and to have it coincide with the fundraiser was very special,” says Mike who was also due to make his 38th trip to Lourdes as a volunteer this summer.

After surviving the night outdoors and completing their 24 hour fast, the group returned to Ellie Phelan’s house nearby where her parents and grandparents had prepared a feast of tart, cream, buns, sandwiches and everything in between.

After they had filled up, the group then headed back towards the hill of Nicker to climb the Mass Rock where candles were lit for their own private intentions.

The Irish Cancer Society, which receives just three percent of its funding from the government, relies heavily on public donations and events to provide services such as counselling and night nurses to cancer patients across the country.

For Mike, who has received the all clear from doctors following his bowel cancer diagnosis in 2011, the cause is something close to his heart as he knows all too well how vital these services are.

“We didn’t want to let Covid-19 stop us from raising money this year and the motto ‘We won’t give up until cancer does’ has never been more true,” he says, adding that plans are already afoot for his 2021 event. Watch this space!

To support the 24 Hour Fast and Sleep Out in aid of The Irish Cancer Society visit www.justgiving.com/fundraising/24hourfast andsleepout.

The link is also available on Michael O’Donoghues Facebook page.

Donations can still be made to the Just Giving Page until September 13. Alternatively supporters can contact Mike directly to arrange their donation on 087 6275559.