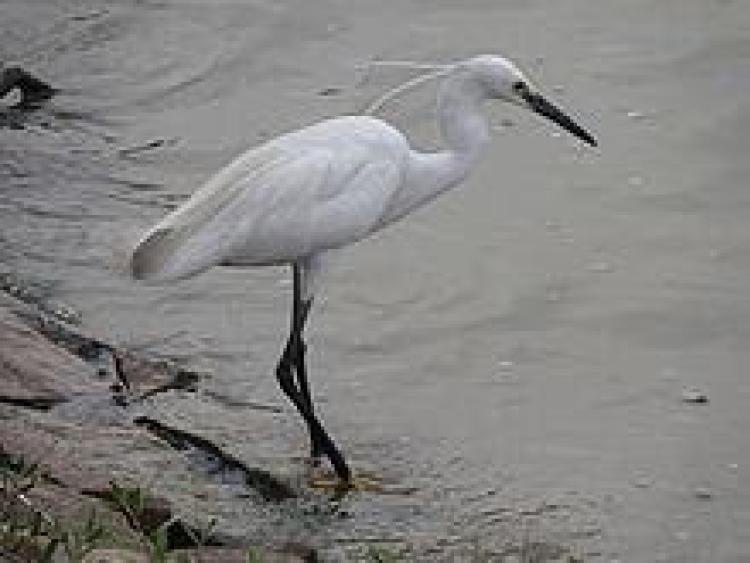 It was a dark, wet and windy day and all along our journey the lights were on in the cars and the houses. The kids swore they even saw a few Christmas lights in a house and given the year I wouldn’t be surprised if people were starting to celebrate early.

We were visiting my mum as we social bubble together and it was also a chance to get out of the house and pick up a few badly needed bits and pieces. After lunch I slipped away for a quick walk during a break in the weather.

It had rained all right and I was drawn to explore the River Ara. I started at the creamery bridge and the river was swollen and fast flowing. Most of the trees along the river bank had lost their leaves. But one tree, a maple was still covered in beautiful golden leaves and it brightened up the whole area.

While I watched a Magpie slipped through the branches of a tree. I am always amazed at how such a big bird can move swiftly through a tangle of stems and branches. The local takeaway is nearby and the tree is the ideal location to keep a watch out for any discarded chips.

High up on the ESB poles the starlings had been singing all day. This choral song added to the growing festive atmosphere. While deep in the undergrowth a wren was singing. This is our second smallest bird and its powerful song is one way it gets noticed.

Willow trees have established where the river channel was narrowed. The strong roots and pliable stems help trap leaves and other river debris. This will eventually create a stable bank where wild flowers that will feed bees and butterflies can become established.

A sycamore tree is growing out of the river wall that borders the street. When it gets a few feet above the top of the wall it is mercilessly pruned back. This has not affected its vigour and each spring the stems renew their charge. Ivy is also growing on the wall and red valerian adds a welcome splash of winter colour.

I reached the entrance to the Abbey school. Roses are decorated with yellow and pink blooms and each bed has a silver birch tree. This lady of the woods or streets continuously sheds its bark and this helps the tree survive in built up areas with lots of cars.

I peered through the Abbey gate and the trees I planted with the students are becoming very established. The colours on the beech are stunning. The soil was disturbed during the planting of the trees and the yellow flowers of wild cabbage have popped up all over the place. I can also see a few of the yellow flowers of sow thistle. Both of these plants are good for birds.

The clouds started to get darker so I quickly moved along. A very tall weeping willow grows near the bridge and its tips were immersed by the rising river.

A flash of white stands out in the countryside and I was thrilled to see a little egret flying over the football pitch. They have long legs and normally feed along by the edge of the river. The high water level has forced them to seek drier ground. I do a quick span with the binoculars but there is no sign of redwings and fieldfares. These winter migrants can be found in fields that have been churned over by animals or urban pitches where players fulfil the same function.

For some the wet weather can be a bonanza. A male blackbird is perched on top of the wall. He takes no notice of me and is peering into the river. I stopped walking intrigued by his behaviour. Eventually he drops down and clings on the wall. There is a narrow strip of vegetation and he hops down and quickly goes by to the wall.

He repeats this several times till he is satisfied it is safe. The worm’s tunnels have been flooded and they are all up on the surface. This bird has found a very clever way of getting his dinner.

Grey wagtail are common along the river and a pair flashes by. They have yellow on their bodies and wings but also grey and this is where they get their name from.

One of a line of hawthorn trees has been blown over. If the tree is not causing an obstruction it can be left alone. It might still grow or become a home for countless mini-beasts and this is an important project for the biodiversity part of tidy towns.

I turned back as the first drops started to fall. Most of the river bank is kept tightly mown but one place is too narrow cut. This supports a diversity of flowers that will support bees and butterflies in the springtime.

Short walks in nature even when the weather is unsettled can reveal uplifting stories in nature.

Comments/Questions to albert.nolan@rocketmail.com or 089 4230502. Albert is also available to give walks/talks to schools, tidy towns, youth and community groups.