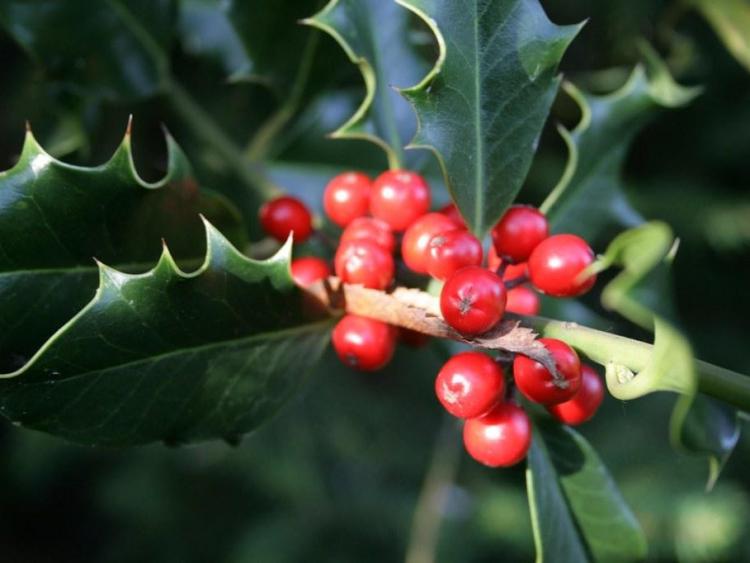 Sunday morning was probably not the best time to put up the Christmas tree, but I had been promising the kids all week. It took a few hours to untangle the lights from the playful cats and the kids were just the best help. After this perfect chaos I was badly in need of a walk and we also had to get some holly to complete the decorating.

We wrapped up well as the day was very cold. As we stepped outside fog shrouded every tree and field. As we walked along spiders webs glistened with dew and soon my beard was the same. The nearest holly tree with berries is a good half hour walk and the cold encouraged us to walk a little faster.

The usual quiet and friendly dogs were very barky, as they could not see us through the fog and this was making them very unsettled. As we passed an old house we spotted several jackdaws on the roof. They were all trying to lay claim to a chimney pot and as we watched one bird emerged. He was soon replaced by another while the rest called and bickered continuously.

Their breeding cycle starts early in December and this is part of the jostling for the best nesting locations.

We turned onto the slip road and we were not the first arrivals at the holly tree. Several blackbirds flew out from the branches and if we had waited another few days, the tree would have been completely bare. We stood back sizing up the tree for the best but reachable berries. When you are standing under the branches, it can be difficult to find as being evergreen, holly keeps its leaves through the winter.

A good tip is to give the tree a gentle shake as there is nothing worse than a shower of cold water down the back of your neck. Another essential is a good sharp pair of secateurs as this gives a clean cut and this allows the tree to heal quickly, so that bacteria of fungi don’t gain entry.

I only take a few berries as I am conscious the birds need the berries as winter food and especially as frost and snow start to arrive.

You need to be really careful removing your berried branch from the tree, as if you pull too hard all your berries will end up on the ground for birds. I put my straight away into a cloth bag. Last year we used a plastic bag and this ripped half way home and the holly was impossible to carry.

On our way home Harry spotted an unusual plant. We knew by its four white flowers and leaves that it was a member of the cabbage family. This was confirmed later as watercress in our well-thumbed flower guide as watercress.

Back home we shook off the fog at the door and were glad to be back in the warmth. The holly was trimmed into shape and stuck into two jugs of water. On cold winters day this sign of life and green from the countryside gives me hope that the dark days will pass and the long day’s spring are just around the corner.

You can also sow holly berries in pots of sand or leaf mould and leave outside over the winter. The berries can sometimes take up to two winters before germination so be patient. A friend of mine feeds his holly berries to chickens.

They quickly digest the fleshy part of the fruit and pass the seeds.

These seeds germinate faster after spending time in the stomach of a bird.

Holly will also grow from hardwood cuttings. Carefully select a pencil sized branch and cut off a piece around 20 cm. Place in a pot of compost mixed with sand for drainage and next spring you should have several new trees. If you want berries you need a male and female tree.

Holly makes a beautiful hedge although it can take several years to establish. Personally I think it is well worth the wait. It keeps its leaves throughout the winter providing valuable shelter for birds and insects. In spring the females of the Holly blue butterfly lays their eggs on the leaves of holly.

The caterpillars eat the leaves but their population is relatively small and this means they don’t do any damage to the trees. The second brood of the holly blue feed on the leaves of ivy.

Don’t forget to pop a good nature book or guide in the stocking and who knows what journey it might take up on in the New Year. There are great Irish guides on birds, insects and animals and really well illustrated books for children. Check out your local bookshop or Birdwatch Ireland online shop for those gifts that help support wildlife.

Celebrating nature and protecting that has supported us throughout the year is a fabulous way to bring this year to a greener and more biodiversity friendly end.

Wishing everyone a peaceful and healthy Christmas and for all the calls, emails and stories of nature throughout the year. I look forward to hearing more next year.