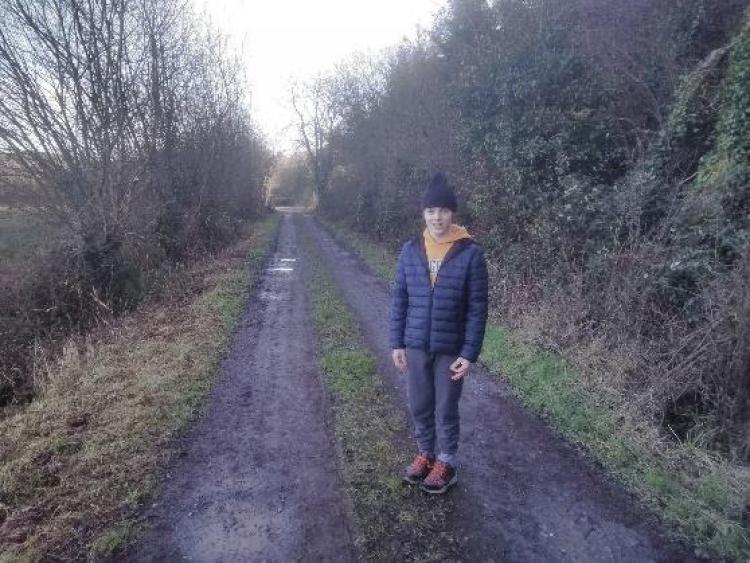 The festive celebrations had left me feeling a little delicate and there is no better way to bring life back into the body and mind than a good walk in nature. We headed off for the Pollagh Trail located a short distance for the village of Birdhill. I was hoping that by arriving early we would have the place to ourselves. Unfortunately everyone else had the same idea and the place was very busy.

There were a lot of families with young kids and all eager to stretch the legs after a few days together. This shows the importance of having easy accessible wildlife walks, where people can escape the stresses of life and family.

We parked in the nearby railway station and this was empty. The tidy towns committee have developed a little garden beside the station and it is a very tranquil place to spend a few minutes. The first of the daffodil bulbs were just nudging above the surface and soon they will be flowering to welcome the spring. Fresh leaves of cow parsley were all emerging and life is slowly coming back into the countryside.

Birds are well looked after with a bird bath and feeder. They also find plenty of natural food for bugs to caterpillars in the area managed for wildlife. A log pile, ivy, bramble, buddleia, ash, elder and sycamore all provide food and shelter for wildlife.
In the shady part of the garden ferns and Hartstongue ferns were growing in the dyke or ditch. I have always used the latter word, but it varies in different parts of the country.

As we left the station we heard two dunnock calling across the road. I have noticed an increase in territorial behaviour and throughout out walks there were several robins singing. We crossed the railway bridge to the sounds of jackdaws and magpies in the tall scots pine and oak trees.

The Pollagh trail is filled with wildlife at any time of the year. Winter is a good time to brush with on trees, as the flowers and their associated insects catch all my attention in spring and summer. We stopped at the bench to read the information panel on trees that have been recorded in the Pollagh. This gives a good idea of what to look out for. There are also Terry interactive eco trail signs located along the walk and these can be scanned with a phone, giving interesting facts on the birds, insects and trees.

In the shade of the woodland there was plenty of holly. Underneath there was a thick layer of leaf litter. This is a habitat for many insects and their larva and this in turn provides food for birds. A curious robin hopped along a branch to see who was disturbing his peace and a wren joined in with a woodland alarm call.

The trees also provide shelter and I was really surprised to find common hogweed coming into flower. This is normally a late summer plant and brilliant for attracting insects.

The hedgerow had been cut flat and this is not ideal for wildlife. But it is over two meters thick and still provides a measure of shelter. We spotted a beautiful male blackbird perched on top. He eyed us for a few seconds before noisily disappearing into the depth of the hedge.

Willow trees line the opposite side of the path and in a few weeks they will have catkins packed with pollen and nectar for early bumblebees.

The small stream by the path is full and looks really cold. This sense of winter is added to by the biting wind coming off the distant Clare hills.

In a field we saw a rook on his own. This is unusual as they are social birds. Over the hedgerow we found the extended clan probing in the soft grass for grubs. There were at least 30 in the group and all was peaceful till a dog appeared and started chasing them. The owner quickly called him back, but it highlights the need to keep dogs on leads or under tight control when walking in the countryside.

A Mum passed by with three small active kids. They are having great fun splashing in the puddles and this was one of my kid’s favourite games when they were little.

We found Meadow sweet in flowers and this is another unseasonal bloom. We heard the calls of a buzzard in the distance and a rook in a tree responded with a varied high pitch call. Next it dropped to the other end of the scale with low deep calls.

The sun got warmer as we reached the connecting path. There were a few flowers out from sow thistle, groundsel and cleavers. The willow trees are covered in delicate lichens and this is a sign of the pure air.

Many of the rich wildflower meadows were drained and sown with trees not long after I first came here. Within a decade they have been transformed into woodland. Alder grows along the edges and a pair of blue tits are foraging along its branches.

The last surprise is a small Lawson cypress tree that was dumped with lots of garden cuttings but has taken to its new home and is growing well. Comments/questions to albert.nolan@rocketmail.com or 089 4230502. Albert is also available to give walks/talks to schools, tidy towns, youth and community groups.