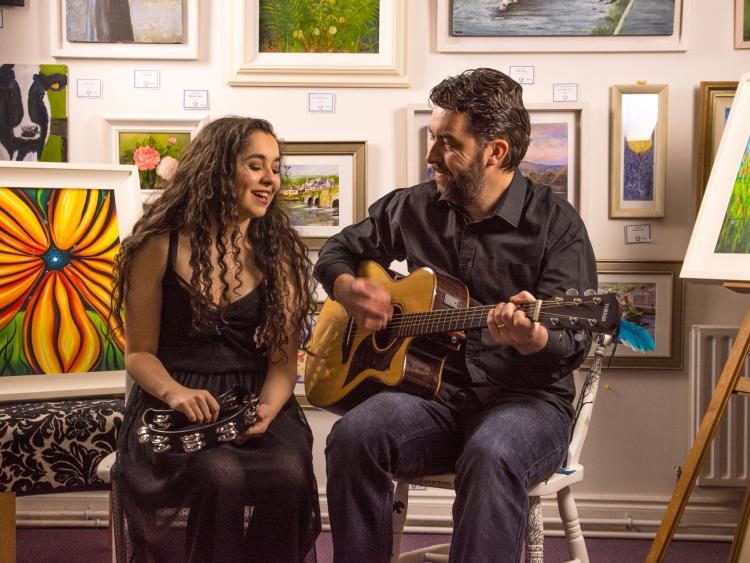 Artists have donated stunning works of art on a canvas to help raise funds for the 2018 Festival Art Trail. This year the artists are going bigger, deeper and square with 12x12 inch canvases. The paintings will be exhibited in the Tudor Artisan Hub and available for sale in a blind lottery for only €25. Artwork will be limited, so visit the Hub early to be in with a chance of taking a unique artwork home for a fraction of its worth.

The party will feature live music by Melua, an acoustic duo from Carrick-on-Suir consisting of Katie and Keith O’Shea. Katie is an active member of Carrick-on-Suir Musical Society and Keith is known for his guitar playing with popular covers band Audiojam. Covering a range of contemporary and classic songs from Fleetwood Mac to Mary Black, and Florence and the Machine to the Lumineers, Melua formed in 2017 and this will be their Carrick-on-Suir debut performance.

Refreshments will be served at the party and tickets are €8. For further information contact tudorartisanhub@gmail.com or call 086-2560609.

Now in its 11th year, the Clancy Brothers Festival of Music and Art returns on the June Bank Holiday weekend, May 30th to June 4th. The festival committee is looking forward to running another full and diverse programme for all ages and wishes to thank everyone for their generosity which ensures the festival’s success.

With music in the theatres, pubs and on the streets, the River Festival, the Art Trail, drama, workshops and family fun, this year’s festival promises once again to be unmissable.

Music highlights of the 2018 festival will include concerts by members of the Clancy family, Cordeen and Freddie White at Brewery Lane Theatre, ‘Musical Society Goes Folk!’ at the Strand Theatre and the much anticipated return of Bread and Beer featuring Robbie O’Connell, Martin Murray, Paul Grant and Tommy Keane who are reforming for a special Clancy Brothers Festival concert at the Nano Nagle Chapel.

The ever-popular River Festival returns to Seán Healy Park with fun for all the family including an outdoor stage featuring Carouse and The Cedartowns. There will be more music on the Pub Trail than ever, youth busking on the streets, nature and heritage walks and cycles, kayaking on the river, lunchtime theatre at Brewery Lane, a Clancy family meet and greet, music, drama and workshops, the Eoghan Power Memorial ballad singing competition and the ever-expanding Art Trail showcasing emerging and established artists from Carrick-on-Suir and across the South East and this year featuring the Yarn Bombers.

The full programme will be available in May.