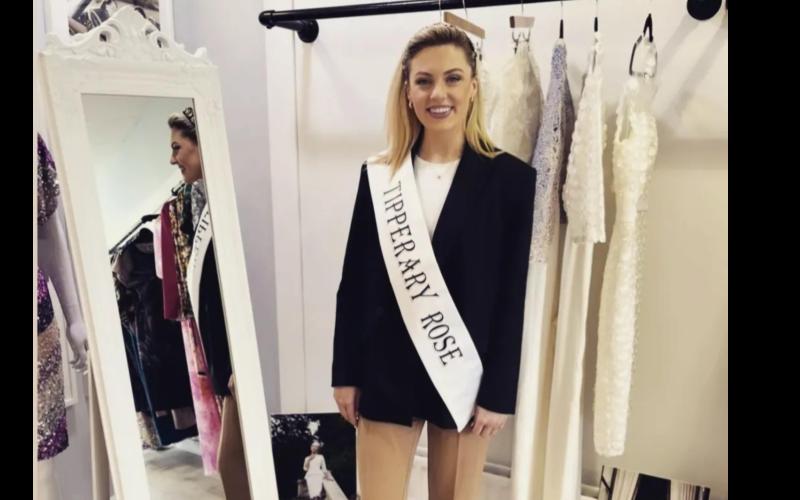 Designer Charlotte Lucas has announced that she is teaming up with Aisling O'Donovan, the Tipperary Rose for  2022, for The Rose of Tralee  festival.

Now based in Dalkey, the Mount Lucas born designer revealed the news in a post on her Instagram last weekend, writing, "I am delighted to announce I will be making a gown for the beautiful Aisling O' Donovan, the 2022 Tipperary Rose. It is a pleasure to work with a truly beautiful and ladylike girl like Aisling".

Charlotte was a nominee in the Designer of the Year category at the 2020 Irish Fashion Innovation Awards, having been honoured in that event's Ones To Watch category the previous year. Her work has also been featured in several national publications, including The Gloss magazine, the Mail On Sunday magazine, and the Irish Independent's Weekend Magazine, as well as being seen on national television on Virgin Media One's long-running and hugely popular morning show, Ireland AM.

"I was delighted to be involved in the 2019 Rose of Tralee fashion show organised by Celia Holman-Lee, and to have the privilege of showing my work amongst immense talent that night", Charlotte recalled. "I also had the pleasure of meeting Kirsten Maher, the 2018 Rose of Tralee that same night, such a lovely and beautiful person. And of course, I've grown up watching and loving the festival like so many in Ireland and around the world."

"So somewhere in the back of my mind", she continued, "and like any Irish designer, I'm sure, the dream of the opportunity to be involved in such an iconic and world-renowned event, was always there. And I couldn't be more pleased that I'll be doing exactly that this year. And all the more so because I'll be working with Aisling, who will definitely do her county of Tipperary proud, but will also be a fabulous ambassador for the whole country if she wins the crown in August."

In response to Charlotte's announcement, Aisling replied, "So grateful for your support, Charlotte, I am so lucky to be supported by someone of your calibre and talent".

Aisling was selected as the Tipperary Rose - and as it happens, the first contestant to be selected for the Rose of Tralee in the post-pandemic era - back in March. It's been all go for Aisling since that big night, with special appearances now a regular part of her life, including receiving a Mayoral Reception from Lord Mayor Michael Murphy in Clonmel Town Hall in recognition of becoming Tipperary's 2022 Rose.

She even ran into the Special Forces - Ultimate Hell Week star, DS Ray Goggins, when he spoke at a special event for the Tipperary Ladies Gaelic Football Association. Indeed, running is something that plays a big part in Aisling's life, with the founder of The Áthas Academy having completed both the Great Limerick Run in May, and the Cork City Half-Marathon earlier this month.

With that kind of drive, and now with Charlotte on her side too, Aisling will certainly be more than ready to face Dáithi Ó Sé come August.