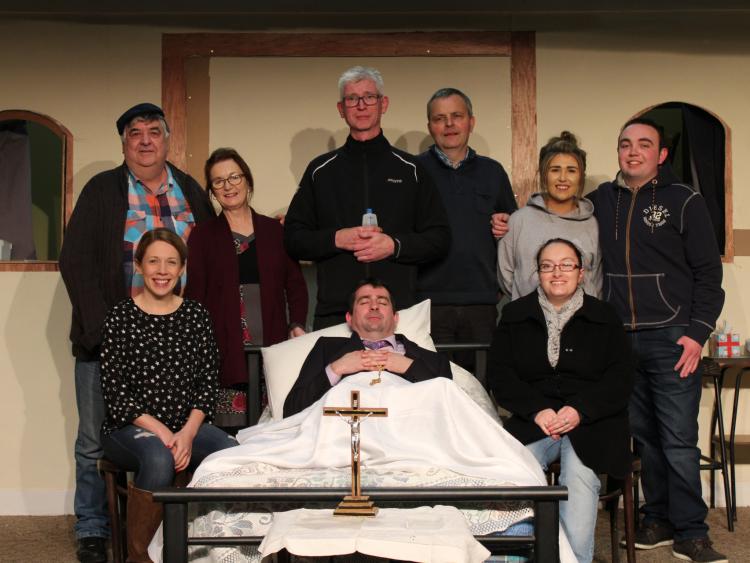 Borrisokane Players are delighted to announce their 2017 production of Micheal Ginnelly’s ‘Wake in the West’ on Friday, Saturday and Sunday 13th/14th/15th January in the Clarke Memorial Hall, Borrisokane, with curtains at 8.30pm nightly.

Set in a small fishing village in the West of Ireland during the 1970’s, this three-act comedy drama tells the story of the last wishes of Tom Healy, a local fisherman ‘fond of the drop’ and the hilarious repercussions his dying wish brings for his family and friends.  A sequence of events ensures a wake full of chaos and commotion!

The cast has been working hard to ensure a quality production and Borrisokane players are delighted to welcome the debut of 5 new actors to the Clarke Memorial Stage. Eddie Kennedy plays the role of Tom Healy, the deceased at the center of this wake. Playing a corpse is no easy feat and even being robbed of his most worthy possessions doesn’t rattle the quality of this corpse. Tom’s only daughter Mary, played by Margaret Cormican, has her work cut out for her trying to orchestrate the chaos of this wake but she makes light work of the obstacles thrown her way. Damien Hough oozes with confidence as he takes on the role of Tom’s son Martin, just home from New York to a funeral arrangement he never expected. Laura Molly makes her first appearance on stage as the next-door neighbour and the unrequited love of Martin. She has her hands full between the wake, the antics and the return of an old flame, but she handles it all with beginners ease. Maura Kennedy ends the list of first appearances to the stage as she takes on the role of Margaret, neighbour to the Healys. Margaret finds herself assisting with more than just the wake and her quality performance sharpens the comical edge of this drama.

With first appearances also comes the return of the quality old stock of the Borrisokane Players. Following on from the success of ‘Thy Will Be Done’ in 2013, Brendan Carroll, Dermot McDermott and Ciara O’Meara make a welcome return for 2017’s production. Brendan Carroll’s experience shines through as he takes on the role of Barney, Tom’s drinking buddy and the local drunk, with sheer ease. The comical quality of Brendan’s performance carries throughout. Dermot McDermott’s role as the local priest brings an air of calm and sensibility to the chaotic situation as only Dermot can do best. Ciara brings her humour and wit to the role of Rose Dawson, the elderly neighbour who causes mayhem from the moment she arrives and makes sure her antics makes this is a wake to remember!  No stranger to the stage, Borrisokane Players are delighted to see the return of Paul Hough as the local doctor, the instigator of Tom’s dying wishes.

Borrisokane Players and the Clarke Memorial Hall would be unknown entities without the hard work and tireless effort of our chairman Gay Hackett.  Gay’s determination and enthusiasm are evident in the casting and production of this years play and for that we are so very grateful.  Gay has ensured a quality drama by enlisting the direction of Eddie Lillis. No stranger to the stage himself and making his directorial debut, Eddie has brought his own experience and comical understanding to this production. His attention to detail and delivery has ensured a performance not to be missed!

So hold onto your teeth and don’t miss the wake of the year!  People are advised to come early to avoid disappointment! Friday, Saturday and Sunday, 13th, 14th, 15th January. Curtains up at 8.30pm sharp, Adults €10, Children €5.