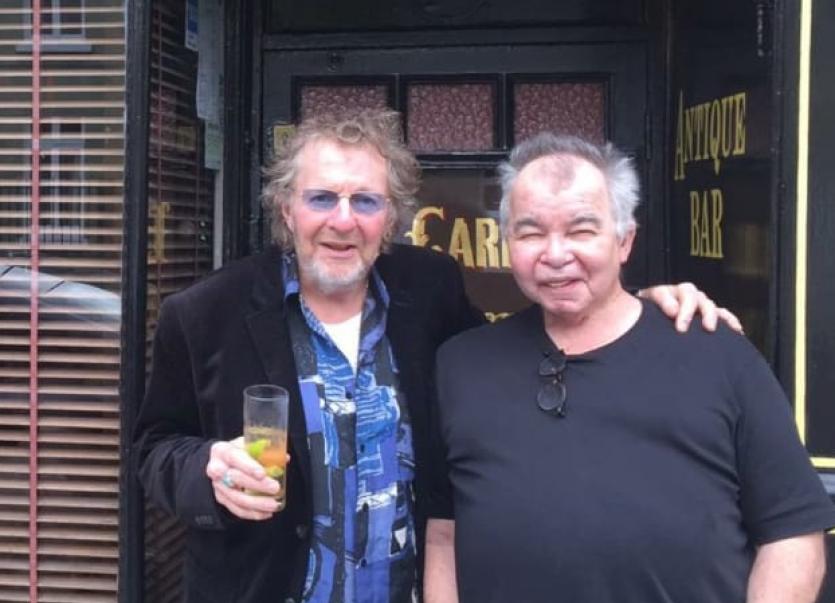 The legendary singer songwriter  John Prine passed away  on April 7 this year.Th esinger had a devoted following in Clonmel greatly enhanced by Joh nPrine's desire to visit Clonmel whenever he could to meet  up with his good friend Philip Donnelly who has also sadly passed away.

The following tribute was written by Clonmel fan Derek Keeley the morning he woke up to discover John Prine had passed away.

Last Tuesday night I had the occasion to be woken just after 4 am by my dog barking from his kitchen bed. On the way downstairs to check on him ,I stopped to pull back the landing curtain and to see what the world looked like today. Of course if you recall it was the evening of the pink moon , a once every seventy year phenomenon that lit up the night sky with the most beautiful colour. The dog was fine of course , he was just getting his barking quota in and while mumbling to myself about how useless the little fella was I took a second to check the morning news on my phone.

And there it was , a headline about another phenomenon that comes around every seventy years .

The headline on the news feed that morning was the sad news that the American folk- country singer John Prine has passed away with Coranvirus in Nashville.  He was seventy three years old and while he had some underlying health issues one couldn’t help but be shocked by the news. For me, as I’m sure for all John Prine fans, he was perhaps as bright and as beautiful as that pink moon and he shed no less light in many ways with his music and words.

Music media has been packed this week with posthumous messages of respect and admiration for John Prine, even our own President Higgins made a statement on it. I wondered if John Prine himself had known  he had so many fans out there ?  In one of these posts it was said, that there was in fact only two types of people in life,

So for those of you who may fall into the latter, here is a quick musical backdrop .

Born in Illinois in the US his career spanned almost 50 years and while ultimately settling to his unique guitar picking Americana sound he was in the 70’s  heralded as the ‘new Bob Dylan’.  Bruce Springsteen  would later joke about sharing this title with him but you can infer from this company that John Prine was true music royalty. Dylan would even go to cover songs of his at live shows in the nineties.

The likeness to Dylan and Springsteen is rooted in his ability to put stories to song. His songs are for the most part observational pieces and he was peerless in championing the underdog and the everyday. He carried himself with no vanity and his humility defined his life and music. He was widely acknowledged in music circles, if not always commercially. He  won three Grammys, the first of these was for his album called ‘The Missing Years’ in 1991, the second for ‘ Fair and Square’ in 2005 and then this year he received a ‘life time achievement’ award from his peers.

The reason then that you are reading a piece about perhaps  the greatest folk country songwriter of all time in the Nationalist, is that there are many in Clonmel, who have met John Prine first hand. He had a strong connection with this area due to his long friendship with Philip Donnelly. Philip Donnelly who himself passed away in December, was an Irish guitarist  who had  played with John Prine since the Seventies. They recorded on many albums together and much of their time together is readily accessible on social media.  After Donnelly’s time in America, he settled  in Tipperary and it was when John was in Ireland in the late Eighties visiting Philip, that he first met his Irish wife, Fiona Whelan. She was a music studio manager in Dublin and went on to be not only his wife but his manager, mother to his two boys and it seems his soul mate.

John Prine (on the right) with Philip Donnelly in Clonmel

Both of these relationships meant John was in Ireland annually for the last thirty years and as often as not, Clonmel and Philip Donnelly’s home outside Golden was on the loop. Some will have observed or met  them both in Phil Carroll’s  in Clonmel and a couple of you I know bumped into John Prine on the street. The shows were highlights of course, I have attended them with friends and parents alike as with a typical life there was something for everyone, he would court many emotions but invariably you left singing. His rare story telling talent was as often  evident in his song introductions as it was with the songs themselves. In a world of celebrity that can be so superficial and sometimes crass, he would also make himself available for a quick word after a show, he always brought intimacy and he was a  point of integrity we can only now applaud.

I would encourage you all then to take the time to listen to John Prine. His songs ironically have never been as powerful or as needed as now in the month of his passing. There are many great songs to choose from, his live albums may give an little extra insight to the man but in a time when our old have never been more vulnerable I would suggest a song called  ‘ Hello in there ‘.  Penned when he was only twenty one, it is sang from the perspective of an elderly man reflecting on his life and it encourages us to look out for our elderly;

‘Don’t just pass them by on the street and stare , as if you didn’t care , say hello in there , hello’.

It is a pity he didn’t get to craft a song on the pandemic that is ravaging the globe today. You know he would have provided greater succour in song than anyone else could have but alas, it is not to be and we can be glad there is such a vast songbook there for us to cherish.

So to the son perhaps Tipperary never had, there is still time to adopt him in song.