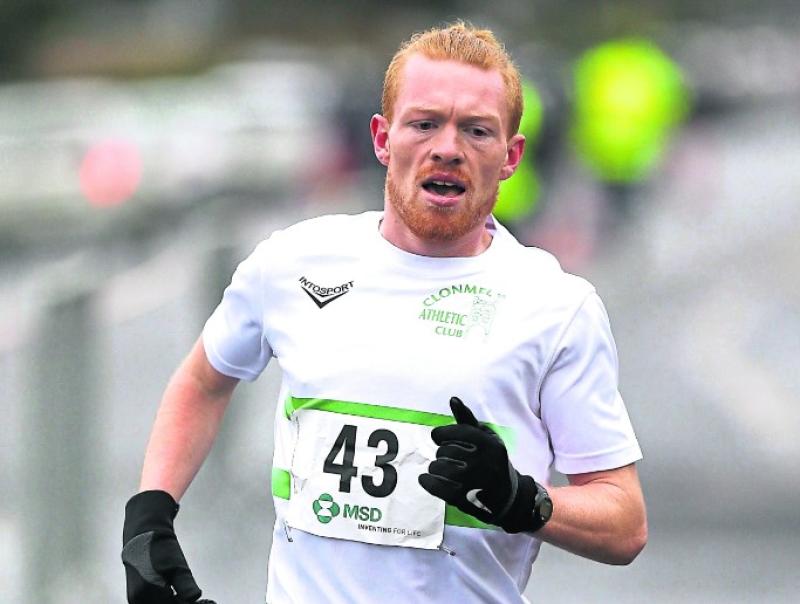 Sean Tobin in action in a previous race

The Blue-ribbon events of the Irish Cross-Country season took place in Abbotstown last Sunday when the National Senior, Under 23 and Junior Cross-Country Championships took place in ideal conditions where for the majority of the course the conditions were firm and ideal for fast running. The County had teams in both the Senior Women and Men’s races.
In the Women’s race Siobhan O'Doherty of Borrisokane ran a fantastic race. Going out strong in a high-quality races Siobhan was in the low twenties on the first lap and running strong. Then as the race unfolded over the 4 laps, she began to make progressed as she passed a number of athletes on each of the subsequent laps and going out in the final lap, she had made her way into the top ten. She maintained that strong pace and despite some late challenges over the final stretch, she kept the pace going to finish a brilliant 9th in 28 mins 52 secs, fantastic performance by Siobhan, when one considers that only 32 seconds separated 4th to 9th places, brilliant. Then we had Ciara Cummins of Nenagh Olympic, making her debut at this level running a brilliant race when finishing 74th in 32 mins 49 secs. Dympna Ryan of Dundrum also ran very well when finishing 52nd in 31 mins 46 secs. Jacqueline Hughes of Thurles Crokes also ran very well when finishing 91st in 34 mins 11 secs and with Anne Marie Boland also running very well when finishing 98th in 36 mins 10 secs, this squad combined very well in such a high-quality entry that the County team were 6th in Division One, brilliant running all round.
In the final race of the day we had the Senior Men’s Inter County and here we also had some fantastic performances. The early pace was set by the two Clonmel athletes Kevin Maunsell and Sean Tobin and their efforts over the first 800m soon had them clear of the chasing pack with Kevin Dooney of Raheny Shamrocks the only athlete able to go with them. These three athletes gave us a fantastic display of relentless running as the laps went by so fast as they were clipping 6 minutes for each of the 2k laps and made it look so easy, just fantastic. Then over the closing stages Kevin Dooney went clear with Sean trying to keep the gap down to the minimum but on the day had to give way to Kevin Dooney. This was a fantastic performance by Sean Tobin.
Hot on Sean’s heels was the very impressive Kevin Maunsell who was running the proverbial blinder as he set the fast pace right from the gun and was in the thick of things throughout the race. Going out on the final lap he maintained that tempo to win the National Senior Inter County Silver medal in 30 mins 18 secs, a fantastic achievement and showed that he can mix it with the best on any terrain, Road, track or Cross Country.
Then we had William Maunsell also of Clonmel running another brilliant race. William went with the early pace and soon found himself in the low 30s such was the pace they went at the start, but this didn’t deter him, as he set about his task and over the 5 lap race he moved through the field as the race progresses, especially over the final 4k as he moved into 13th place over the closing stages when finishing in 31 mins 32 secs, fantastic. Then we had Sergiu Ciobanu of Clonliffe Harriers, a former winner of this event in 2013, who had declared for Tipperary also running a brilliant race when like William improved as the race progressed. He put in a great effort over the closing stages when finishing 19th in 31 mins 58 secs, brilliant running. Then we had Kevin Moore of Dundrum also running a great race, he too made great progress over the closing stages when finishing strongly in 42nd place in 32 mins 55 secs. Then we had David Mansfield of Clonmel AC running a great race when finishing 55th in 33 mins 26 secs. These six athletes combined very well to win the Senior inter County Silver medals, a first for the County since Athletics Ireland was formed in 2000, fantastic performances all round. We also had very good performances from Tony Fogarty of Templemore Ac who was 110th in 35 mins 49 secs, Joey Feery Clonmel Ac 121st in 36 mins 34 secs and Anthony Bowen Clonmel 128th in 37 mins 10 secs. Fantastic running all round.