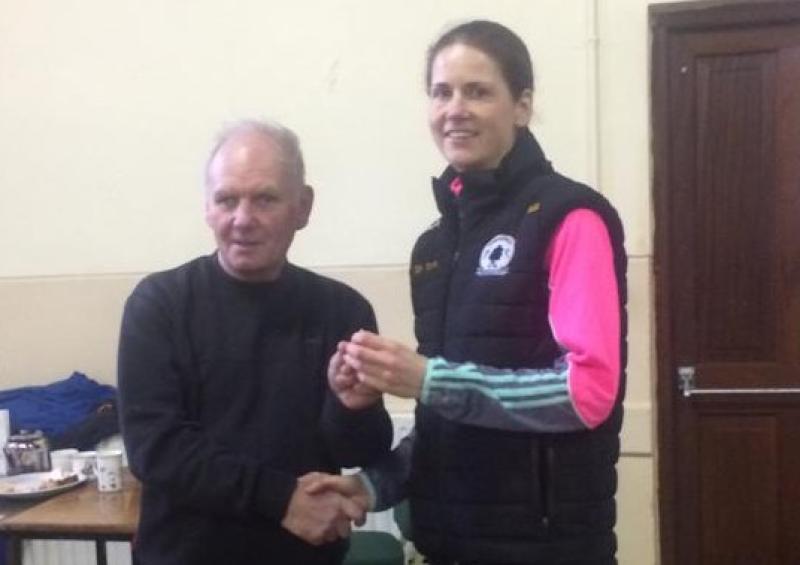 Galbally was the venue last Sunday for the blue-ribbon events of the 2018 Cross Country Championships, the county Senior Women’s 6k and men’s 10K. With Galbally at the foot of the Galtee Mountains athletes and spectators were welcomed to Galbally with a light mist but mild conditions on a good Cross-Country course that had everything, hills and plenty of long stretches for athletes to stride out while the spectators had an arm chair view of the whole event at the top of the hill.

Women’s Race
The women’s race attracted a very good quality entry and spectators witnessed some great performances. None more so than that of Linda Grogan of Dundrum. Right from the start Linda made her intentions known as she went to the front soon after the start and set a strong pace on the 3-lap circuit. At the end of the first lap she was well clear of the chasing pack and from there to the finish she made every stride a winning one as she came home a very worthy and convincing winner in 25 mins 39 secs. This was Linda’s second time winning this prestigious title, her previous success was also in Galbally in 2016, Galbally has happy memories for her.
Midway through the first lap Dympna Ryan of Dundrum moved into 2nd place and as the race unfolded, she consolidated that Silver medal winning position when finishing 2nd in 26 mins 24 secs.
The battle for the Bronze medal was very close over the first lap with three athletes in contention, Madeline Loughnane of Thurles Crokes, Angela Fogarty of Moyne and Aoife Courtney of the host club, Mooreabbey Milers. As the race unfolded, Aoife took up the pace midway through the 2nd lap and kept that strong running going in demanding conditions to win the Bronze medal, her first County Senior Cross Country medal in 26 mins 51 secs, brilliant running from this young athlete.
For the record Angela Fogarty of Moyne was 4th in 27 mins 13 secs with Madeline Loughnane of Thurles Crokes 5th in 27 mins 23 secs and Carmel Fitzgibbon of Thurles Crokes, the defending Champion, 6th in 28 mins 2 secs.

Women's Team Event
In the team event both Thurles Crokes and Dundrum had two athletes in the top six, so all eyes were on the top of the hill for the 3rd scorer on each team. Soon afterwards we saw Karen Coughlan of Dundrum coming over the top of the hill and she kept the pace going to finish a very creditable 10th in 28 mins 53 secs to secure the Inter club Gold medals and Cup for Dundrum along with her teams mates Linda and Dympna and helped Dundrum to bring the County Senior Club title back to the village after an absence of six years, in convincing fashion.
The Silver medals were won by the Mooreabbey Milers team of Aoife, Sarah Fitzpatrick 9th in 28 mins 30 secs and Mary Louise Ryan 11th in 29 mins 3 secs.
The Thurles Crokes team of Madeline Loughnane, Carmel Fitzgibbon and Martina Ryan 15th in 29 mins 44 secs won the Bronze medals with Clonmel 4th and Moyne 5th. We also had a B Section in this event encouraging Clubs to enter more than one team and here the gold medals were won by the host team of Marie O Shea 12th in 29:20, Martina Moloney 16th in 29:56 and Aine McGrath 19th in 30:58.

Men's Race
We then had the men’s race over 5 laps and once again we had a very good quality entry. Right from the start the defending Champion, Kevin Moore of Dundrum made his intentions known as he went to the front of affairs and set a strong pace in demanding conditions. He soon found himself well clear of the chasing pack and he maintained that pace to come home a very worthy and convincing Champion in 35 mins 52 secs, great running by Kevin who has been putting in some very good performances in the English Cross-Country scene in recent weeks.
The battle for the Silver and Bronze medals was between David Mansfield of Clonmel and Stuart Moloney of Moroeabbey Milers as they had pulled clear of the chasing pack on the first lap. On the 2nd lap David increased the pace that soon saw him go clear of Stuart and as the race unfolded, he moved well clear to claim his first County Senior individual medal when winning the Silver medal in 36 mins 28 secs. Then we had Stuart Moloney running on well to win the Bronze medal in 36 mins 43 secs.
For the record Michael Carey of Clonmel was 4th in 36 mins secs with Paddy Cummins of Moycarkey Coolcroo running a great race when finishing 5th in 38 mins 11 secs with John Fitzgibbon of Thurles Crokes hot on his heels in 6th place in 38 mins 16 secs.

Men's Team Event
The team event was very very close, going out on the final lap, Thurles Crokes had a slight lead on Dundrum and Clonmel with every athlete battling for precious points. In the end just two points separated the three clubs with Clonmel emerging as Champions with their team of David Mansfield, Michael Carey, Joey Feery who was 12th in 39 mins 58 secs and Conor Ryan 16th in 40 mins 33 secs, edging out defending Champions Dundrum by one point and Thurles Crokes by two points, oh so close, great performances all round in such trying conditions.
The Silver medal winning Dundrum team consisted of Kevin Moore, Gareth McGlinchey 10th in 39 mins 49 secs, Dermot Hayes 11th in 39 mins 40 secs and Colm Bradshaw 13th in 40 mins 4 secs.
The Thurles Crokes team of John Fitzgibbon, John Treacy 7th 38 mins 21 secs, Denis Shanahan 8th 38 mins 22 secs and John Russell 15th in 40 mins 14 secs won the inter Club bronze medals with Mooreabbey Milers 4th. In the B Section the Clonmel trio of Anthony Bowen 18th 40:42, Sean McCarthy 23rd in 43:27 and Conor Fleming 27th in 44:30 won the Gold medals. The Silver medals were won by the Dundrum team of Martin Keane 19th in 40:49, Eamon Morrissey 20th in 41:42 and Jim Halley 30th in 44:57. The host club team of Willie O Donoghue 22nd in 43:05, Liam O Donnell 25th in 44:25 and Gerard Hanley 28th in 44:49.
At the Presentation of Awards, County Treasurer, Owen Fanning, thanked the Mooreabbey Milers club for promoting two great events and he also thanked them for the post-race refreshments. He thanked all the Clubs for supporting these Championships. 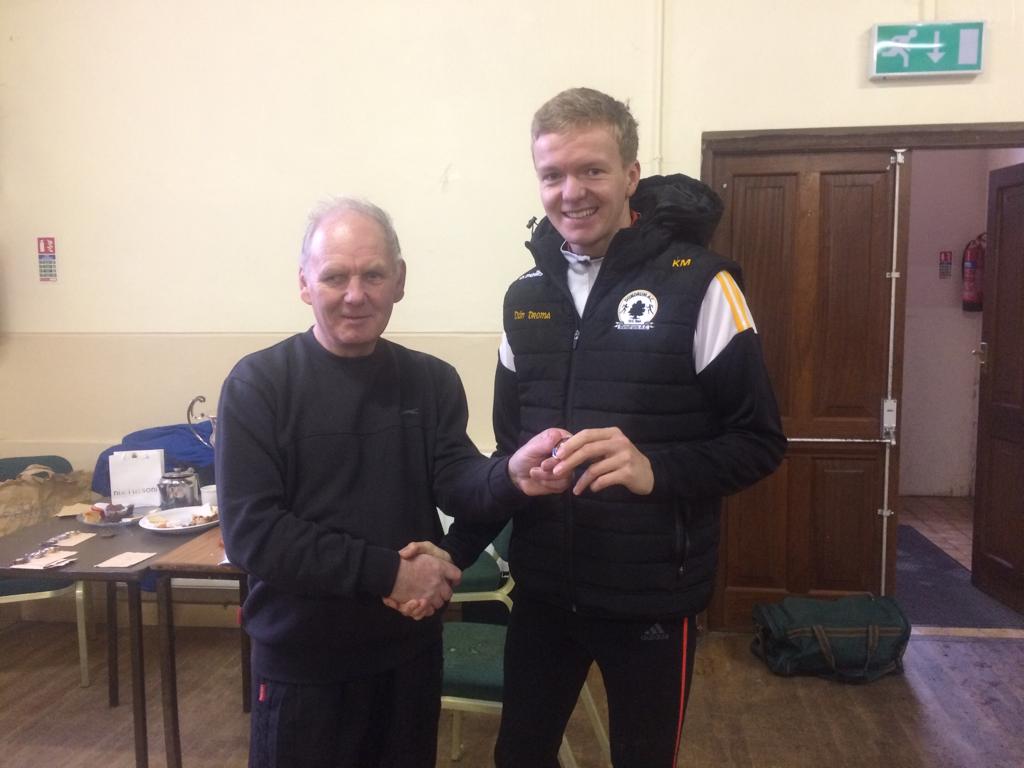