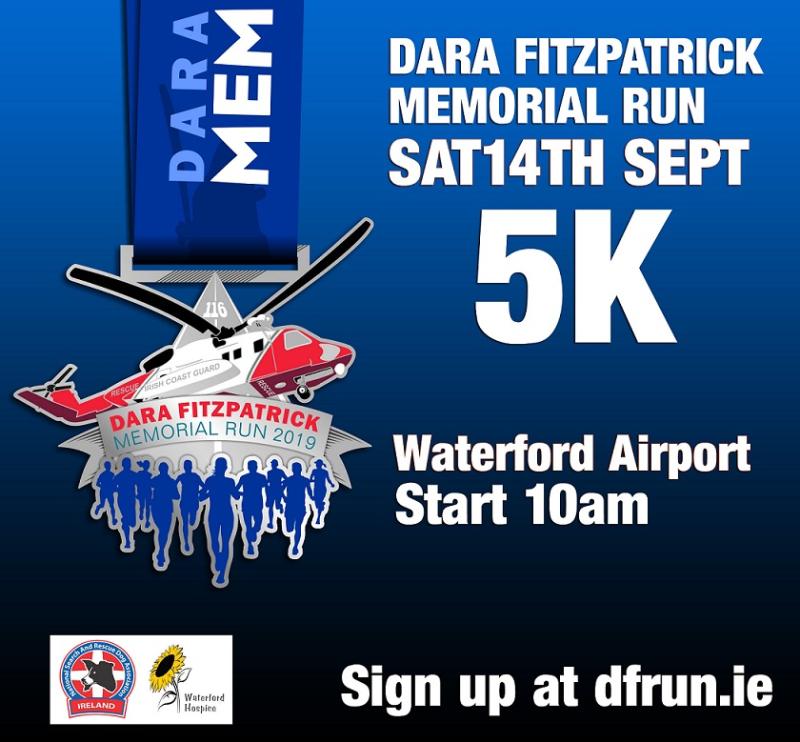 Dara Fitzpatrick Memorial Run has released details of their run finisher’s medal. The medal depicts a Sikorsky S92 Helicopter flying over the runners on the runway. In the background are the numbers “116”. On the back of the medal keeping watch over the runners, are four flying doves honouring the lost Rescue 116 crew members, Captain Dara Fitzpatrick , Captain Mark Duffy, Winch Operator Paul Ormsby and Winchman Ciarán Smith.

The event which is a 5k run in aid of two charities, Waterford Hospice – Home Care Team and the Search and Rescue Dog Association (SARDA), takes place on Saturday, September 14 at 10am at Waterford Airport.

Commenting on the medal Niamh Fitzpatrick said “Each year for the Dara Fitzpatrick Memorial Run, Ryan from totaltiming.ie produces a medal that captures the essence of what is a very special event. As a family we're often told how proud people are of their DF Run medals and the 2019 design will certainly be a beautiful addition to the collection. It's especially lovely to see the runners represented this year, we love it. So a big thank you from the Fitzpatrick family to all involved in producing such a unique finisher's medal, we're very grateful”.

Speaking about the medal one of the event’s organisers Ray Leahy said, “The doves are a beautiful tribute to the four crew of Rescue 116 who tragically lost their lives in the service of others on March 14th 2017”.

This is the third year running this very special event, one that has sold out each year. Participants can register and find more information at www.dfrun.ie. The number of participants is limited and is filling up fast, so those interested are advised to register early to avoid disappointment.

If you can’t join us but wish to donate, you can do so at www.dfrun.ie

The organisers would like to thank Waterford Airport, without whose enthusiastic support the event would not have been possible. We would also like to thank our sponsors Clem Jacob Hire, Cquent.ie, MacTrans., and Musgrave Marketplace, also Irish Coast Guard, Civil Defence and all the emergency services that support the run.

For further information go to www.dfrun.ie