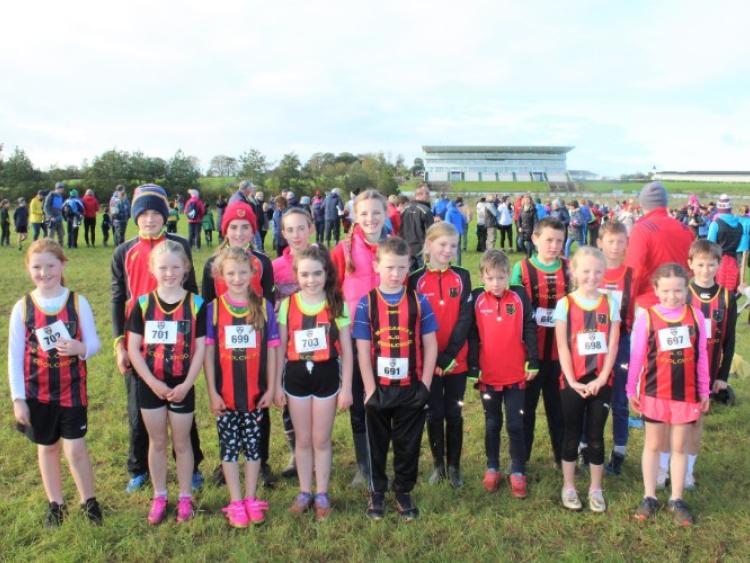 Moycarkey Coolcroo AC Juvenile athletes who competed at the Munster Even Ages Cross Country in Limerick Racecourse on Sunday, October 20

Road Racing
The stars aligned for Paddy Cummins on October 13 as he won the 2019 Mens County Intermediate cross country race in great style applying pressure to the front from the off and after many years of trying he finally got his just reward for all his past efforts, Tipperary Athletics chairperson Billy Purcell had the honor of presenting Paddy with his gold medal. Well done Paddy.

Munster Even Age Cross Country Championships
Congratulations to all our athletes who travelled to Limerick to compete in the Munster Even Age Cross Country Championships. It was a very tough and resting course on which all our athletes ran with great pride.
First up was Aoife O’Donnell who finished 9th in the girls u10 race and was the first Tipperary girl home. Super running from Aoife.
Next up Boys U10 where Sean Sheehan who unfortunately lost his footing and still managed to finish in 20th place. Well done Sean! Jamie O’Connor cane home in 50th place another excellent run. Well done also to Thomas Carroll who finished 123rd.
Girls U12 Mollie Maher finished 150th abs boys U12 Jamie Carroll was 110th. Well done.
In the girls U14 Aoibheann Fogarty tan a very strong and steady race in what was by now a very uneven and muddy course Aoibheann cane home in 54th place followed by Sophie Coughlan in 61st place and Elizabeth Tye in 68th place. Great running by these girls .
The boys U14 team saw Daire O’Donnell finish 40th another great run.
Best of luck to the athletes who will contest the uneven age Munster Championships in November in Cork.

3 Ryans in London
Congrats to Jack Ryan who joined his brothers Daniel & David in College at the prestigious Brunel University in London. We wish him the best of luck with his studies and his athletics career and hope he enjoys his time there and to David who's into his 2nd year and Daniel who is into his final year.