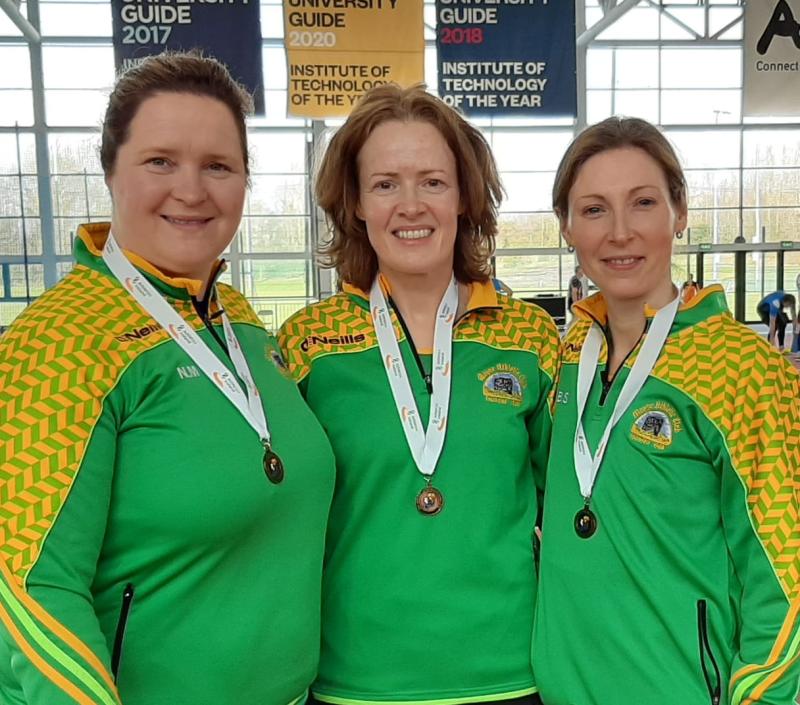 National Masters Indoor Track & Field Championships
The national finals are coming thick and fast and on Sunday March 8 it was the turn of our Master athletes as their championship finals took place in Athlone. On a full day of tremendous competition, the club came home with 1 National Champion and 7 National Medals.
While the events were spread out throughout the day, club supporters were kept on their toes early on as three of our athletes, Sinead Tynan, Ber Spillane and Naomi Morrissey, were all competing in various areas of the arena at the same time. What a start to the day it turned out to be as all three medalled. First off the mark was Sinead who won the bronze medal in the W50 High Jump with a leap of 1.25mts, then came Ber who raced to a new pb over 60mts when also winning a bronze medal at W35 level with a time of 9secs and finally came Naomi who produced a great throw of 7.23mts in the W40 Shot Putt, which was also a pb, to win yet another bronze medal. Well done ladies on three great performances.
Next up on track came the 400mts events and again the athletes did not disappoint with two tremendous performances from Ber and Sinead as both won their second bronze medals of the day with Ber clocking a new pb of 1.08.10 at W35 level and Sinead 1.15.26 at W50. Both ladies also competed over 200mts and despite the hectic schedule finished 5th and 4th respectively in their categories with times of 30.56secs and 34.63secs.
While the ladies were on the track, Naomi was commencing her second competition of the day the W40 28lb Weight for Distance. Competing against five other athletes in her category Naomi produced a great series of throws, with a best of 5.76mts, to clinch the gold medal and become the National Champion. This just shows what dedication to training can achieve. Indeed, of the 23 athletes competing throughout the various categories Naomi’s performance placed her second on the list. Congratulations Naomi on a fantastic achievement.
Following on from the ladies competition it was time for the men to show their powers and none better than Ned Dwyer who, after finishing an excellent 7th in the M55 Shot Put with a throw of 7.80mts, took on the same opposition for the 56lb Weight for Distance but this time around he more than matched his opponents and with a best throw of 6.89mts it propelled him into second place and secured a National Silver medal for his huge efforts. Well done Ned. It must be said that Ned has added so much to the throws element in the club having come in this year as throws coach. His undoubted track record and talent down through the years is of great benefit to the club and our young and not so young talented athletes can but only improve with his input. Naomi is a product of this coaching.
Ray Power was our final athlete in action on Sunday and his category, M55, must surely have been one of the most competitive categories on the day with heats in most of the events. Ray came through for 4th place in the 400mts with a time of 1.15.30 and finished 7th in both 60mts (9.56mts) and 200mts (31.83). Well done Ray.
The penultimate event on the day was the Ladies 4 x 200mts relay event with the team of Ber Spillane, Elaine Smyth, Edel Delaney and Sinead Tynan mixing it with the best to finish in 5th place in a time of 2.20.18. There will be other great days for this group of athletes.
Our thanks to all the athletes for providing us with great performances on the day and to Martin Flynn and Ned Dwyer on their coaching skills. Thanks also to all those who travelled to Athlone on Sunday to support the athletes which is very much appreciated by all.

National Senior Indoor Track & Field Championships
The cream of Irish Track & Field Athletics, including the likes of Phil Healy, Molly Scott, Ciara Neville, John Travers and Mark English to mention a few, were in the National Athletics Centre in Abbotstown on Saturday and Sunday March 1/2 for the finals of the National Senior Indoor Track & Field Championships. Taking their place amongst this elite band of athletes was our 4 x 200mts relay team of Leona Maher, Emma Gleeson, Rachel Butler and Katie Bergin. The girls competed in the penultimate championship race on Sunday and what a performance they produced. With just an average age of 16, they gave away many years to their competitors. One could not fault them for being nervous, running against such exalted company, but they all gave a super display of running to finish in fourth in a new club record time of 1.52.52. This experience is invaluable in the formation of this team and the confidence gained will certainly stand them in good staid when their U/19 Relay Championships take place in April in Athlone. Well done girls. Thanks to all the parents and supporters on the day which was very much appreciated by all four girls.

Lotto
Winners in this week’s lotto are John Stokes and Oliver Walsh. Thanks to everyone who supports the club by buying tickets.

Couch to 5k
This event is going from strength to strength with all those taking part enjoying the benefits of running and walking. Feel free to come to the track on Monday and Wednesday nights at 7.30pm to take part in this progressive programme. This is a non-competitive and will suit everyone.

Training Courses
The club is always looking for parents or indeed senior athletes to get involved in coaching. The following courses are now on offer from Athletics Ireland and will be run in Clonmel - March 21 – Assistant Coach and March 28 – Athletics Leader. These are one day courses and are a great way to get an introduction to the basic skills of athletics. Entry is on-line at Athletics Ireland. Please consider doing one of these courses and help in the club.

2020 Summer Games
Wednesday, June 17 has been confirmed as the date for the third running of our track and field games. The programme remains the same as last year apart from including a Ladies WFD instead of the Junior Men LJ. Interest is gathering momentum and we hope for a great spread of athletes across all disciplines. More details on the event to follow.

June 5k
This year the club have decided only to run a 5k event on the June Bank Holiday Monday instead of our normal Mini Marathon. While this is a change in distance, it is generally felt that many people prefer the shorter race and it is also an achievable aim for anyone starting out jogging/running. More details to follow. 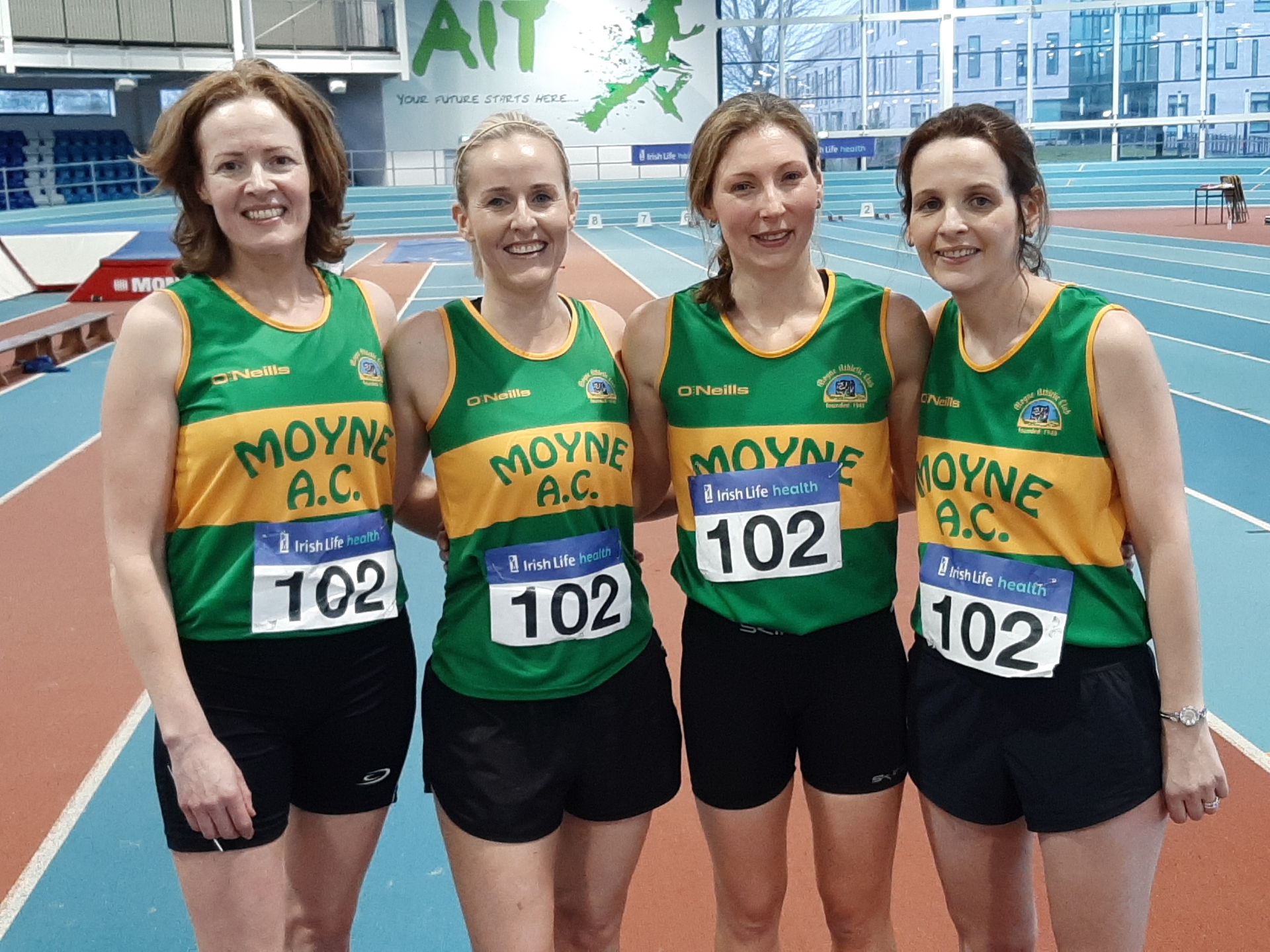