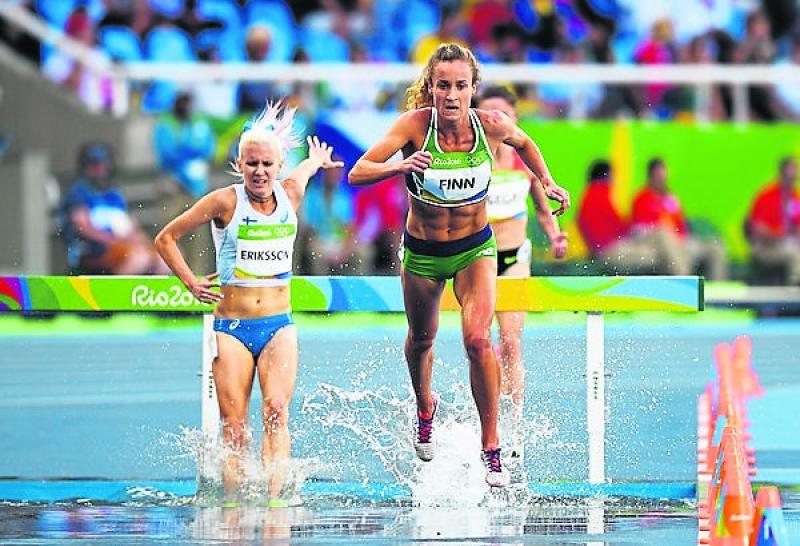 Michelle Finn, whose father Toddy hails from Thurles is among the Irish internationals who will take to the track in Moyne AC

The staging of our third Summer Games is set to be our most successful yet, despite all the restrictions that will be in place, due to Covid-19.

Such has been the interest from athletes that the club has had to close the entries two weeks early with all events full up. Over 100 entries have been received for both the ladies and men’s events with some top names in our sport making the trip to Moyne on Saturday 25 July.

To meet the increasing demand of the athletes the start time has been brought forward to 3pm. To also meet the interest from the general public and due to the restrictions on spectators, the entire event will be live streamed on our Facebook page.

The highlight of the games will undoubtedly be the Men’s Mile and Ladies 800mts and this in no way detracts from the rest of the programme which will have people on the edge of their seats, such is the calibre of athletes on show in these events.

There are over 30 entries in each of the two main events featuring some of the best athletes that this country currently has.

In the Ladies 800mts five of the top six in the National Indoor Track & Field Championships in February of this year are participating and these were also amongst the top four in the Outdoor Championships in the Summer of 2019.

With that level of talent on show it should be a huge race and the magic figure of 2.05 is certainly looking like it will be broken. Nadia Power, Dublin City Harriers, the current indoor 800mts champion, Katie Kirk, University of Ulster, Jordanstown the silver medallist at the outdoor Track & Field championships when finishing just ahead of Nadia in that event, Iseult O’Donnell, Raheny Shamrocks/ Dublin Track Club, (the winner last year), and Claire Mooney and Ellie Hartnett of UCD are the ones to watch while Irish record holder Rose-Ann Galligan (2.00.58 set in 2013) is also amongst the entries.

Annette Quaid, Leevale who has been a constant participant at the games and is a world class masters athlete, is also entered as is Greta Stremikyte an Irish International Paralympian and local Tipperary athletes Aimee Hayde, Newport and Sarah Lane of Nenagh Olympic who can more than match it with the best.

Athletes competing on the track generally compete over 800mts or 1,500mts but the iconic mile event is always one that sets the heart into a flutter particularly if you have athletes who are willing and able to master the breaking of the magical four minute mile barrier.

While Tommy Moloney, Thurles Crokes became the first Tipperary man to hold this distinction, the actual breaking of the four minute mile on Tipperary soil has never been achieved and on July 25 this could be set to change with huge interest from our top middle-distance runners in putting this to bed once and for all.

Sean Tobin of Clonmel has set this mark as his goal for the season.

He is fully aware of the calibre of athlete he is facing up against as many of those entered are already training and racing with him in the Dublin Track Club.

Sean set the meet record for the track of 4.04.48 in 2018 running almost solo and his return to running following a niggling injury has seen him put in some tremendous training runs and times.

No doubting he is in flying form but he must be in tip top shape to hold off the challenge being mounted by fellow club-man Andrew Coscoran, who ran 3.56.85 indoors in Boston in January while also breaking the 14 year old record for the 1,500mts indoors in February clocking a new record of 3.41.36. Paul Robinson, St. Cocoa’s, has a personal best of 3.54.77 while Brian Fay, Raheny Shamrocks has clocked 4.00.45.

Add in the likes of Luke McCann, Dublin City Harriers and Cillian Kirwan, Raheny Shamrocks and you have one hell of a field of milers. Rory Chesser, Ennis Track, another athlete who has supported this programme of events each year has a 4.03 pb with Ted Collins, Nenagh Olympic running 4.05. Shane Healy, MSB who is one of the most diligent athletes on the circuit and amongst the oldest is still capable of mixing it with the best there is on offer.

Last year he just missed out on the M50 world record and he will once again be aiming to break that target – 4.19.59 - on the night.

His form in training suggests that this is certainly within his reach and with the right favourable conditions who is to say he cannot succeed.

What a trill it would be to see this achieved on a small country track. The bonus of €500 on offer for the first man to break the four-minute mile on Tipperary soil is certainly looking like it will find a new home on the night but it anyone’s guess as to whom that mantle will be worn by. Another tremendous race is on offer.

Entries in the 100mts and 200mts sprints have exceeded the club’s expectations with again many of our Country’s top international and national athletes taking part.

The ladies 400mts sees Sharlene Mawdsley double up with Niamh Malone, Monaghan Phoenix and Laura Nally Galway City Harriers in competition with each other.

These are just a few of the athletes competing and a further profile in these events will be detailed next week. Many of them have and continue to represent Ireland in international competitions and with hopes of competing in the Beijing Olympics in 2021 also on their agenda, the club are delighted with their participation on 25.

Interest in the event, not just from the athletes, but from the general public when they see the quality on offer, is going to be huge.

This is amongst the first athletic meet to take place since Covid-19 interfered with all sporting fixtures and with restrictions placed on the number of spectators who can attend, the club are streaming the games live on our Facebook page.

We will be enforcing all Covid-19 guidelines and are asking for the goodwill of all the athletics community to ensure everyone is kept safe and the event runs to schedule.