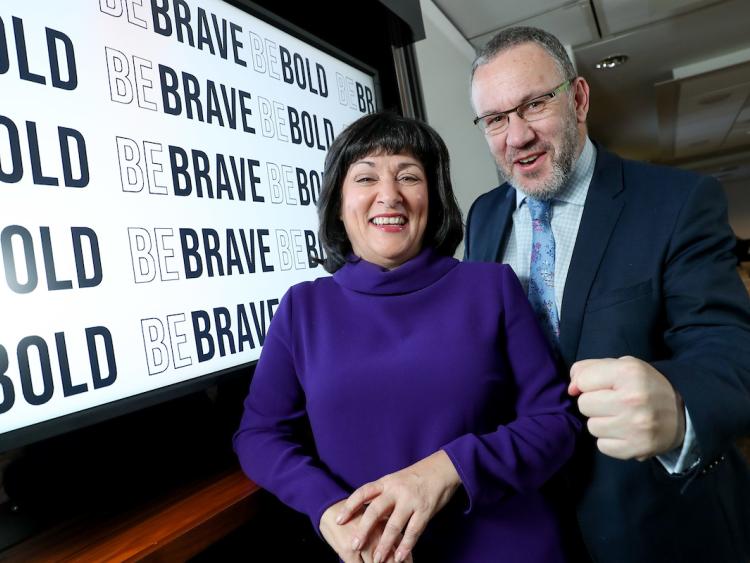 Pictured at the launch are Anne Heraty, CEO, Cpl Resources plc and Chairperson of the Judging Panel and Kevin McLoughlin, EY Ireland

Now in its 22nd Year, the EY Entrepreneur of the Year 2019 programme is officially open for nominations. The theme of this year’s programme is “Be Brave, Be Bold” and all sectors and businesses of all sizes across the island of Ireland are invited to submit their nominations until 15 February. The 24 finalists for 2019 will be announced on 23 April.

Tipperary’s entrepreneurs are encouraged to put themselves forward to follow in the footsteps of well-known Tipperary business people, Clodagh Cavanagh, Abbey Machinery, and PJ Flangan, H&MV Engineering, who were finalists in 2016 and 2018. Hugh O’Donnell, Kentz Group, was the eventual winner in the International category in 2009.

Kevin McLoughlin, Partner Lead for EY Entrepreneur Of The Year Ireland said: “I am delighted to launch the 2019 EY Entrepreneur Of The Year programme, now in its 22nd year. This year we are committed to supporting and encouraging our island’s entrepreneurs to be brave and to be bold, whether that means taking a first step with a brilliant idea, or taking a calculated risk to drive growth in their business. They will be able to take inspiration from, and tap into the vast knowledge of Ireland’s most fearless entrepreneurs who have gone through this programme in the past. I am really proud that we now have an Alumni network of 500 entrepreneurs who have benefited from the programme and remain connected to it.”

He added: “A highlight of the programme will be when our finalists go on our renowned international CEO Retreat taking place this year in Hong Kong, designed to help Irish entrepreneurs transform their thinking and vision through executive education and inspiration from some of the world’s leading CEOs.”

Who can be nominated?

Operating in more than 60 countries worldwide, EY Entrepreneur Of The Year is recognised as the most prestigious business accolade for entrepreneurs. The programme is open to entrepreneurs from all sectors and growth stages, across the island of Ireland. The awards programme is divided into three categories - Emerging, Industry and International - with eight finalists chosen per category. The 24 finalists will be selected by an independent panel of judges, comprising former winners and chaired by Anne Heraty of CPL Resources plc. For further information or for people who wish to put themselves forward or nominate an entrepreneur with their consent can fill out the online nomination form at www.eoy.ie.

Speaking at the launch, CEO of CPL Resources plc, Chairperson of the Judging Panel, and EY Entrepreneur Of The Year 2006, Anne Heraty said:  “I’m looking forward to hearing the stories of the entrepreneurs we will meet in 2019 and watching them develop over the course of the programme. The importance of entrepreneurship as a leading source of innovation, job creation and global economic growth is becoming increasingly clear. We see such a vast array of businesses come through the programme, all of which have the potential to disrupt industries overnight, which makes the job of the judging panel increasingly difficult year after year.”

Last year saw a strong mix of male and female finalists across nine different sectors who collectively employed more than 2,700 people and generated revenues in excess €150m. Daniel Mackey and Peter Coppinger of Cork-based SaaS company Teamwork emerged as the overall winners at the 2018 EY Entrepreneur Of The Year Awards and will go on to represent Ireland at the World Entrepreneur Of The Year Awards in Monte Carlo in June. Belfast-based Hospitality group Beannchor took top prize in the Industry category, while biotechnology company Carrick Therapeutics won top prize in the Emerging category.

Kevin McLoughlin said: “Over the years, the programme has become increasingly diverse across sectors. It was great to see the very significant increase of 50% in the number of female entrepreneurs nominated last year, but we know there is still more to do. The EY Entrepreneur of the Year is the home of entrepreneurship, so it’s important that the full spectrum of entrepreneurial talent on the island of Ireland is reflected and represented. We really encourage male and female entrepreneurs of all ages and from all industries and backgrounds to get involved and nominate themselves for the 2019 programme.”

What finalists can expect

The finalists will engage in a strategic growth programme over a 10-month period which includes a week-long CEO Retreat to Hong Kong. As part of this international retreat, this year’s 24 finalists will join a group of more than 100 fellow entrepreneurs, all previous finalists and winners of EY Entrepreneur Of The Year programme where they will meet CEOs and entrepreneurs from some of the world’s biggest multinational companies.

The finalists will also gain exclusive access to a prestigious community of over 500 peers known as the EY Entrepreneur Of The Year Alumni. To date, more than three quarters of our Alumni community have conducted business with one another - demonstrating the advantage of being part of this supportive and prolific professional network.

The programme will include executive education sessions; networking fora; extensive media profiling; the annual Gala Awards Dinner. An award is presented for each category, and an overall winner will be announced at the EY Entrepreneur Of The Year™ Awards in November.  That person will go on to represent Ireland at the World Entrepreneur Of The Year Awards in Monte Carlo the following June.