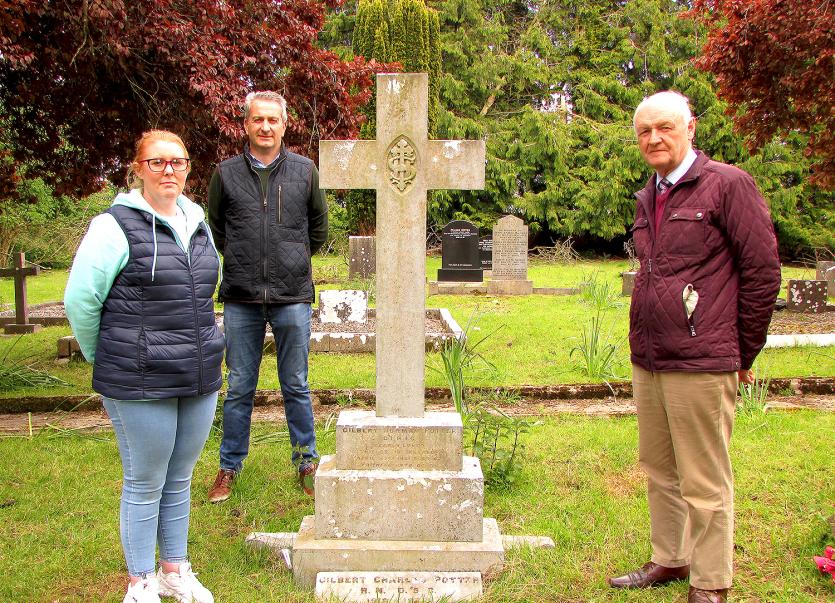 From April 22 to 28 just past, Cahir Social and Historical Society broadcast an online series entitled, “A Life for A Life” based on the final days of Volunteer Thomas Traynor and District Inspector Gilbert Potter of Apsley House, Wellington Street (now Pearse Street) in Cahir.
Gilbert Potter had been stationed in Cahir since 1913. Using 21st century media technology to tell this tragic chapter from the War of Independence, six successive Cahir Social and Historical Society Network news bulletins took viewers from the “breaking news” of a fatal IRA ambush at Garrymore that led to the capture of D.I. Potter, the execution of Thomas Traynor and an anonymous letter to Mrs Lily Potter claiming that her husband had been executed by the Irish Republican Army.
The final episode involved Liam Roche telling Seán Scott about the aftermath of “A Life for A Life”. This interview ranged in scope from Gilbert’s August 1921 burial in Kilcommon cemetery to an amazing encounter in Narvik, less than 20 years later.

TITLE FROM TIPPERARY NATIONALIST
The title of this series came from a Tipperary Nationalist headline of May 14, 1921.
Each episode was ably anchored by Seán Scott in “studio”. Kevin Farrell was our razor-sharp Security Correspondent who reported from outside Mountjoy Prison, the Mall in Cahir and even on Zoom for one report!
Other members of the cast were Gráinne O’Donnell (Mary, Potters’ housemaid), PJ O’Meara (Colonel Cameron), Paddy Caplice (IRA Spokesperson), Michael Houlihan (IRA Activist), Arthur O’Donnell, Michael Duggan and Josephine O’Neill (Cahir residents). The action scene in Episode 1 featured Éamonn Clohosey, Edward Clohosey and Brendan O’Brien as IRA Volunteers.   The script for “A Life for A Life” was written by PJ O’Meara.
Liam Roche was the Series Historical Advisor and Michelle Crimmins managed our social media work. Snap Media filmed, edited and directed “A Life for A Life”. Sincerest thanks to everyone who assisted us with this project. Mary Clohosey must be singled out for her artwork and we would like to also thank the Stokes family on Pearse Street for allowing us to film outside Apsley House.

GRATEFUL THANKS TO ALL WHO ASSISTED
We are particularly grateful to Tipperary County Council and the Department of Arts, Culture, Gaeltacht, Tourism, Sport and Media for their funding of this production through the Tipperary Decade of Commemorations programme.
The series continues to be available on our Society’s website at www.cahir historicalsociety.com and also on our Facebook page.
This was Cahir Social and Historical Society’s first time to attempt a project in this format.
The series has received a very warm response, something we deeply appreciate.
Most importantly we remembered two family men, on different sides of the conflict, who were tragically for them and their families, in the wrong place at the wrong time, 100 years ago.