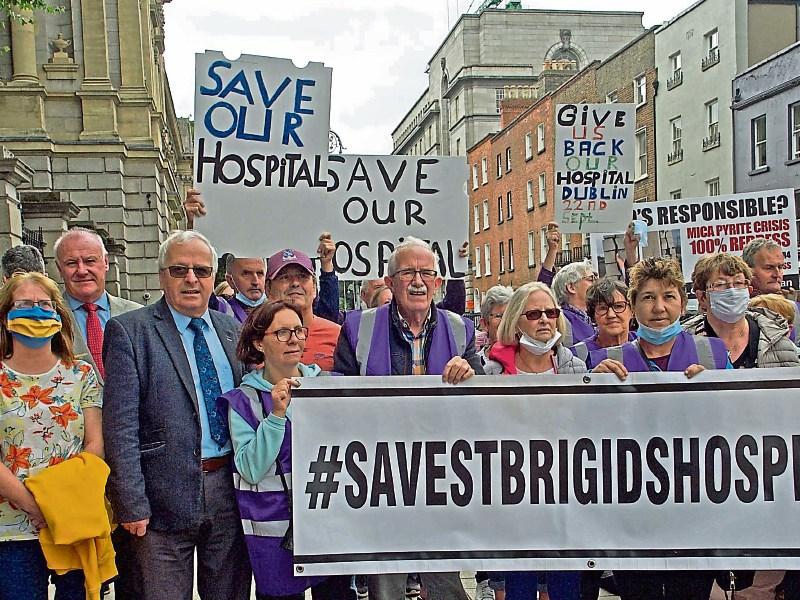 The petition of more than 11,000 signatures demanding the reopening of Carrick-on-Suir’s St Brigid’s Hospital handed over to Minister of State Mary Butler at the Dáil last week has paved the way for an Oireachtas committee to put the HSE’s closure decision under the spotlight.

Tipperary Sinn Féin TD Martin Browne, who chairs the Oireachtas Public Petitions Committee, said there was a backlog of petitions to come before them but he indicated that the St Brigid’s Hospital petition will be prioritised. “We will be pushing that it would come before us fairly fast.”

The Cashel-based Deputy said the Petitions Committee, comprising seven TDs and four senators from across all parties, had the power to bring ministers before it and question them.

He pointed out it  also has the power to make recommendations to a minister arising from its investigations.

The presentation of the petition to the Fianna Fáil Minister for Mental Health & Older People by Save St Brigid’s Hospital Action Group representatives former TD Seamus Healy and family carer Jane Jones on Wednesday afternoon, September 22, was accompanied by a protest at the gates of the Dáil by about 60 members of the action group.

The protesters included Carrick-on-Suir’s two county councillors Kieran Bourke of Fianna Fáil, who thought up the idea of collecting the petition and presenting it to the Oireachtas Petitions Committee, and Cllr David Dunne of Sinn Féin, one of the founding members of the Save St Brigid’s Hospital Action Group.

Most of Tipperary’s TDs, namely Independent Mattie McGrath, Deputy Browne, Labour leader Alan Kelly and Jackie Cahill of Fianna Fáil along with Fine Gael Senator Garret Ahearn joined the Save St Brigid’s protesters to show their support for reopening  the  hospital that closed its doors last year shortly after being redesignated as a Covid-19 step down facility.

Dean McGrath of the Save St Brigid’s Action Group said they were  happy Minister Butler met them and accepted the petition but they were disappointed their brief meeting with her inside the gates of Leinster House was so rushed with ushers urging them to move on.

He said the action group’s members let Minister Butler know in no uncertain terms the “massive depth of feeling” in Carrick-on-Suir and its hinterland about the closure of St Brigid’s Hospital.

But just three paragraphs of the three-page report headed “confidential” deal with the reasons for closing the hospital.  It states that having “considered the current infection, prevention and control advice”, the decision was regretfully made to discontinue short stay services at St Brigid’s.

It adds that: “Unfortunately, it is no longer feasible or sustainable to continue to operate St Brigid’s as a District Hospital from an infection, prevention and control perspective given the layout of the premises, the narrow hallways and the inadequate space and facilities available in the two five-bedded wards.”

Save St Brigid’s Action Group member and former TD Seamus Healy dismissed the report as “threadbare”  in relation to the specific reasons for closing the hospital.  He said  the reasons cited for closure were not backed up with architectural, engineering or fire safety reports. And the  vast majority of the report dealt with the HSE’s future plans for the hospital building.

“At no stage does the report say the hospital was not fit for purpose because it couldn’t say that as HIQA had already approved it for in-patient care,” he pointed out.

Mr Healy also claimed the HSE report was inaccurate in describing the hospital’s wards as five-bed units.  He said these wards were reduced to four-bed units prior to the Covid-19 pandemic, greatly increasing the space for patients and medical staff in each ward.

“There is literally nothing in this report. They (the HSE) are clutching at straws. There is no doubt in my mind that the decision to close St Brigid’s was taken way before Covid-19 and the HSE took the opportunity to close it after the pandemic came.”

Carrick FF Cllr Kieran Bourke was also dismissive of the HSE report describing it as just a “synopsis”.

He said he  now believes there was never a detailed report or assessment carried out by the HSE on St Brigid’s Hospital building’s suitability in relation to new infection prevention and control requirements.

Cllr Bourke said the Save St Brigid’s protest received fantastic support from TDs at the Dáil  but  he felt the  manner in which the action group’s representatives were met by his party colleague Minister of State Mary Butler was “inappropriate” and “bordered on rudeness” given that they represented the views of more than 11,000 people.