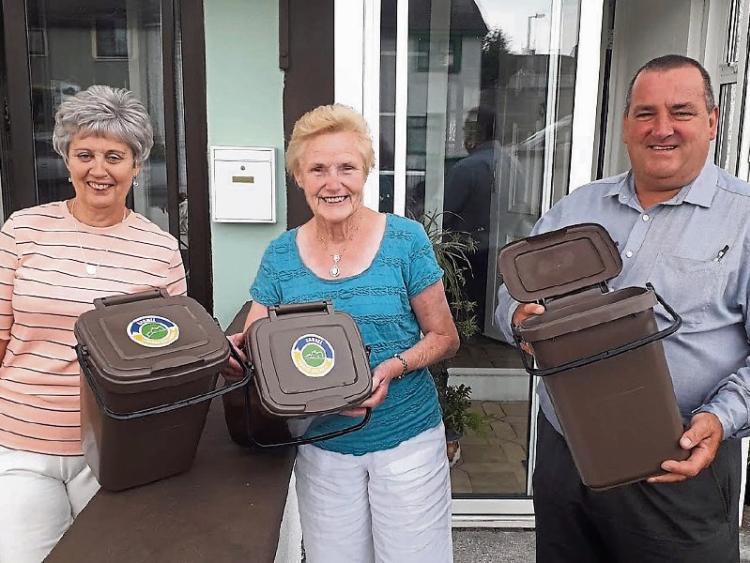 A pilot project to address the issue of Food Waste is being rolled out in Cashel as part of the Zero Waste Cashel Project.

The Waste Characterisation Study carried out last year highlighted the fact that over 22% of the weight of general waste bins in Cashel was food waste.

Anecdotal evidence suggests that people are just scraping dinner scraps etc. into the general waste bin rather than into the Brown Bin for organic waste. The distribution of Kitchen Caddies to a number of households is being carried out to ensure that food waste goes into the correct bin ie. the brown bin.

Food waste collected via the brown bin is brought away to be turned into compost which in turn helps rejuvenate the soil which is used for growing plants, vegetables etc.

When food waste goes into the wrong bin it ends up being sent to landfill sites and generates methane gas which in turn contributes to climate change.

Spafield Crescent in Cashel was chosen for the pilot project to receive free kitchen caddies as it has a good number of households on which the success of the project can be measured. Local councillor, Martin Browne, who is also on the Zero Waste Cashel Steering Committee also lives in the estate and has been of great assistance in calling to households helping to explain the benefits of using kitchen caddies.

For information on how to avoid food waste and to learn about home composting visit stopfoodwaste.ie