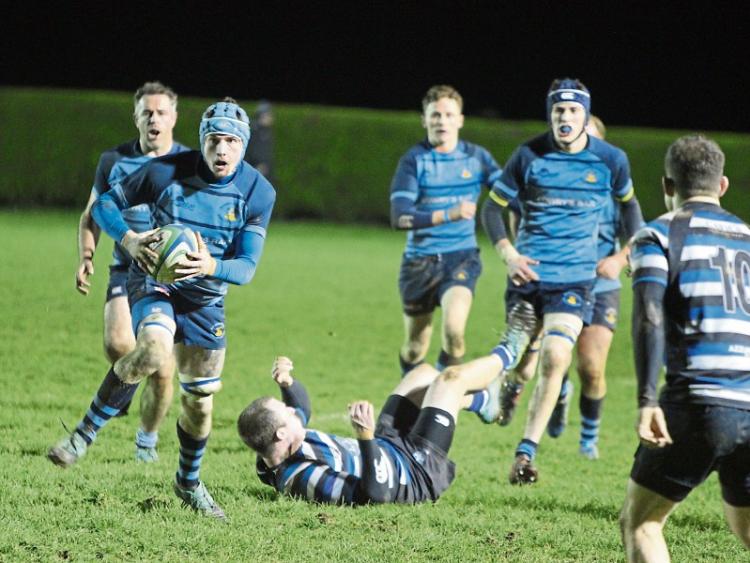 After our last win in the league The Boys in Blue were at home again, facing  Crosshaven under floodlights on Saturday last in Morrissey Park.

The game started at a frantic pace, with Crosshaven securing the kick-off and refusing to relinquish possession. Following numerous phases of play in which Crosshaven recycled quick, good ball, they secured the first score of the game with a try scored under the posts and converted easily with just four minutes gone on the clock. The home fans were stunned into silence. As the conversion sailed over their heads William Staunton, player coach and Brian McLoughlin, captain had some stern words for their team.

This was the first and last time that Crosshaven were to score or even threaten Kilfeacle’s try line. Kilfeacle were to suffer another blow when Shane Luby was subbed off with an injury early on, not the best way to celebrate his 30th birthday. Stephen Quirke came off the bench to fill the void in the pack and Crosshaven soon learned that the quality of Kilfeacle’s bench is similar to that of the starting 15.

Crosshaven were still celebrating their early try when they discovered that they were unable to get the ball back from Kilfeacle. Within two minutes of the restart and with less then seven minutes on the clock Kilfeacle had scored a try under Crosshaven’s posts to bring the score to 7-7.  It was finally touched down by Kevin Kinnane after a titanic team effort. William Staunton converted.

It was always going to be a tight game, with scoring chances at a premium, but it was Kilfeacle that started to impress in the latter stages of the half, the combination of backs and forwards working well.   William Staunton  slotted a monstrous conversion kick after Keith Bourke scored Kilfeacle’s second try. The half-time scoreline read 14-7 to the home side.

Crosshaven started the second half and immediately had a long-range penalty attempt which fell short of its target. Anxious moments followed for the visiting supporters, of which there was a sizeable amount, as Kilfeacle, after 14 minutes built up multiple phases of play to find themselves only metres from the Kilfeacle line. However the defence stood strong and were not to be breached on this occasion. Crosshaven were restricted to kicking the ball long with the aid of the breeze and on a few occasions were able to find touch inside Kilfeacle’s 22. This was the closest Crosshaven were to come to scoring. The home supporters feared that the Kilfeacle concentration, discipline  or resistance might crumble. However Crosshaven’s supreme effort had, in fact, the opposite effect and galvanised the Kilfeacle team into a unit as they went in search of a tangible response.

After  another 15 minutes of concerted and constructive pressure The Boys in Blue notched up another try that had the scoreboard reading 21 points to 7.

Crosshaven are a resilient outfit and did not let this impact on their game plan, and came back at Kilfeacle immediately, but were met with a stout defence that was well marshalled and disciplined in particular by Michael Slattery, Ricki Whitney and Cormac Ryan, who had now come on as substitutes.

With 10 minutes remaining on the clock and with Kilfeacle bossing the game, Kilfeacle were hunting a bonus point.

For once Kilfeacle were found wanting. A combination of wayward kicking, unforced handling errors, bad decision-making, unforgiveable lapses in concentration and last-ditch heroic defending by their opponents meant that the  fourth valuable try never came.

Having said that, the squad on the night consisted of not men but Titans, with towering displays all over the pitch combined with a backroom team of Alan ‘Scall’ O’Mahony, PJ McLoughlin, John Flaherty, Paul Donovan and Ted O’Connor.

The final whistle came and the home side celebrated their hard- fought but deserved victory. The display that the Kilfeacle team gave during this game and the manner in which they played could be measured by the applause they received from both sets of supporters.

Our next league game is a tough away game to Skibbereen RFC on  this Saturday December 7. The team as ever are proud and humbled by the amount of support they receive and hope that their supporters will continue to come along and support the Boys in Blue.