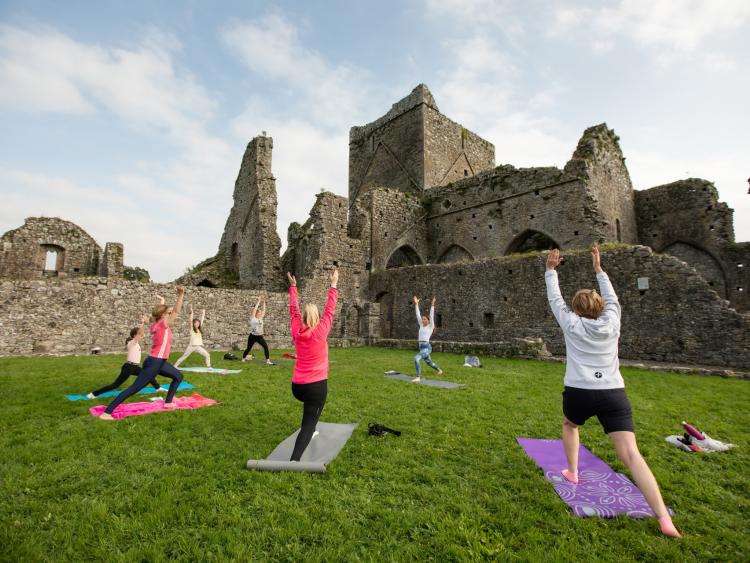 Cashel Arts Festival is delighted with the success of their 18th annual festival and would like to thank the local community for their involvement and participation in this year’s programme. Cashel was brightened up with colour, music and a vast display of entertainment from a local, national and international stage.

Events kicked off early in the week with a Visual Arts programme getting off to a flying start. Sculptor Philip Quinn carved a four-metre trunk that was felled for safety reasons in Cashel Cathedral Churchyard on John Street into a living creation this September and this was completed during the festival.

Archbishop Miler Magrath and Charles Hawkins, two Cashel characters separated by 400 years, inspired this original sculpture in wood, the result of which will be there to see for years to come.

Daniel Doyle created sand sculptures in four locations around Cashel – at Baileys, the Plaza, Cashel Library and in the grounds of the Cathedral. These centred on the theme of how the current pandemic has affected people of all ages, with art depicting working from home, the effects of lockdown on teenagers and the elderly, and finally, the return to school in the current climate.

Other visual art included the community outreach programme, with children from local schools taking part by creating stained glass windows and scraffito art. This has been displayed in the Plaza and at the library during the festival and they have certainly helped to brighten up the centre of Cashel. Well done and thank you to all the children and their schools, who took part in this project.

On Thursday, September, 17 our festival weekend got off to a dynamic start with a Fit.Dance.Mix. workshop, run by local dance instructor, Yuliya Shilnikova.

Poetry anthology, Stone on Stone, also became available to buy. There has been a great reception to this collection of poems from both local and established poets of all ages, with hand-drawn illustrations from Petronelle Clifton Brown. Readings of a selection of the poems by both children and adults were filmed by Denis Vahey at the cultural sites of Cashel and the film was available to view on the festival screen and can still be seen on www.cashelartsfest.com.

The hardback book is still available to buy online and at The Heritage Centre, Main Street at €15.

Friday saw children’s author David Donohue, engage with children via Zoom for a workshop based on character Walter Speazlebud and the writing process.

Cashel Virtual Choir’s song, A Million Dreams, also went live on the festival website on Friday evening. This song was arranged by Lena Hally and all choir participants learned their parts in their own homes. They then sent their videos in and Pat Marnane put the audio and video together.

Cashel came alive on Saturday, with the community taking to the streets to view the visual arts projects and the festival screen in the Cathedral grounds on John Street. The festival screen showed a number of pre-recorded events, such as poetry readings, the choir video, Colourstrings and Do Chuala Ceol, along with a short excerpt of music from John Blek.

This workshop provided a range of enjoyable, challenging and stimulating musical activities to help children develop and discover their own musical potential.

They had an opportunity to learn about musical concepts in a fun environment, using rhymes, games, play and instrument playing.

Do Chuala Ceol is a new creative collaboration between singer and composer Fiona Kelleher, musician Caoimhín Vallely and filmmaker and Cashel resident Dónal Ó Céilleachair, bringing to life an Irish Suantraí (Magical/Lullaby) Song Cycle based on the poetry of Séamus Ó Céilleachair and Seán Ó Riordán.

Saturday evening marked the annual Bolton Lecture, given by Bonnie Greer on Tipperary Mid-West radio. This was hosted by Cashel Arts Festival Chairperson, Anne Marie O’Donnell and was an insightful and inspiring conversation with the broadcaster, playright, novelist and critic.

This was a great chance to speak to such an icon of our time and we were very grateful that she could join us on air as part of the festival. Wellbeing was to the forefront this year, with sold out yoga classes on both Saturday and Sunday afternoons at the cloisters of Hore Abbey. These were highly popular classes, which were greatly enjoyed by those who attended.

Cashel Arts Festival closed with a pre-recorded intimate gig with John Blek on Sunday evening. This was recorded by Denis Vahey Photography in Ardmayle Church and was a stunning performance in a beautiful setting.

Cashel Arts Festival are delighted with the local response to the festival and would like to thank anyone who enjoyed events in person, online and on the radio.

They also wish to extend their deepest gratitude to every artist, author, musician, poet, dance or yoga instructor, speaker, photographer, sound and visual technician who worked with them throughout the festival.