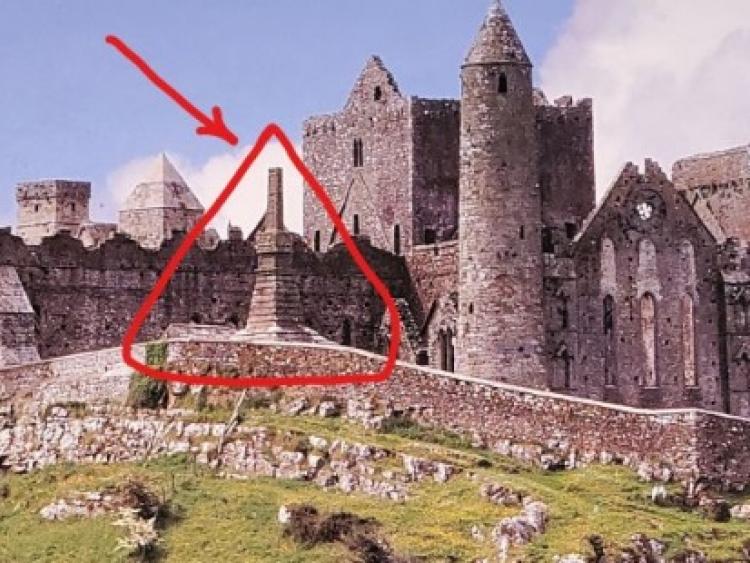 A Canadian man is aiming to restore a famous celtic cross on the Rock of Cashel violently destroyed in 1976 by a bolt of lightning.

Denys Arthur Scully is hoping his gofundme page will restore the Scully Cross to its former glory. Here is its story.

The year was 1867 - the year the first ship was to pass through the Suez Canal, that the new Dominion of Canada was birthed, that former African slaves would begin voting in the USA, and that Karl Marx would publish Das Kapital. It was the year the first washing machine would be patented. And that the Fenians would try to rise in Ireland.  It was also the year Vincent James Scully, MP for Cork County, Ireland commissioned the building of a family burial vault on the Rock of Cashel in Tipperary.

Workers finished the Scully monument, with Vincent proud to make it an especial place to honour his own father, Denys Scully, a renowned Irish patriot and believed by many to be the powerful pen behind Daniel O’Connell’s voice in the push for catholic emancipation.

But Vincent was not content with the tomb only. He also envisioned a Celtic high cross over it that would boldly show the Scully connection with the catholic faith and the Irish people’s history.  He successfully concluded this project in August 1870.

This 'Scully Cross' also became known as “the new cross of Cashel,” as compared to the 12th century “old cross” that stood in the Vicar’s Choral just south of the Cathedral.

Characteristics of the Cross

When the project was completed the Scully Cross stood prominently within the walls of the Rock of Cashel, at the extreme northeast corner.  It commanded a position overlooking the fields around Cashel and could be seen from a great distance when approaching from then north on the Dublin road.

From the base of the vault to the Cross’s apex was more than 50 feet (4 1/2 stories) high. The Cross itself was nearly half this overall height.  In Our People are on the Rock, (p. 140) Tom Wood and Cecile Huftier state:

“Every panel had significance….Depicted were: Crucifixion; Saint Patrick as captive, shepherd, and as a bishop accidently piercing the foot of King Aengus during the Baptismal ceremony; Evangelists; Christ in Judgement with the Good and Bad souls; Ascension of our Lord; Assumption of the Blessed Virgin; Cormac MacCuileannain, 10th century King/Bishop of Cashel with the Psalter of Cashel; Saint Patrick banishing the snakes from Ireland; depiction of Denys Scully writing his “Statement of the Penal Laws”; group of people looking with awe at the new cross.

Not least also was the circle around the crux which, along with the iconography, distinguished it as a Celtic cross, as compared with Roman, Byzantine or other designs.

Sadly, in the winter of 1976, almost half of the top of the Cross was toppled in a violent storm. Nature had taken its toll eventually weakening its structure.  But so did human neglect, with no direct descendent of Vincent eventually left in Ireland to care for it.

Although many have wanted to see the Cross repaired, and some have taken steps to explore this possibility, the task is great and costly.  After 44 years, however, perhaps the time is now.

Why repair the Cross?

1. Family name: Over one million people from around the world see the (broken) Cross each year. To restore it will reflect well on the Scully name and worldwide reputation.

2. History: The Cross is a symbol of Irish history and nationhood as well as the Scully family’s commitment and contribution to its betterment. To restore the Cross would bring honour to our ancestors and bring these worthy historical things to memory.

3. Art: The Cross is in the tradition of such Celtic icons as the Book of Kells. To re-build it would be to restore one of Ireland’s—and the world’s—most magnificent pieces.

4. Faith: a cross—and the Scully Cross—is first and foremost a memorial to the Christian faith and all the best this faith has given to the Irish, the Scully’s, and the world.

The Scully Cross was erected at great effort and expense by Vincent James Scully.  Not only did he fund the Cross but he also negotiated with various political and ecclesial authorities to accomplish his goal. The same will be true as this restoration project progresses.  But it is a noble and worthy effort to make, and you are invited to join in it.

To date, besides communications with the Irish government, consultations have taken place with Rock of Cashel staff, architects and craftsmen. But the work is only beginning.  Moral support is needed.  Skilled partners are needed.  And, of course, financial support is needed.  For further information please contact https gofundme.com help repair the Scully Cross in Cashel. Some $425 has already been raised of a $100,000 goal.