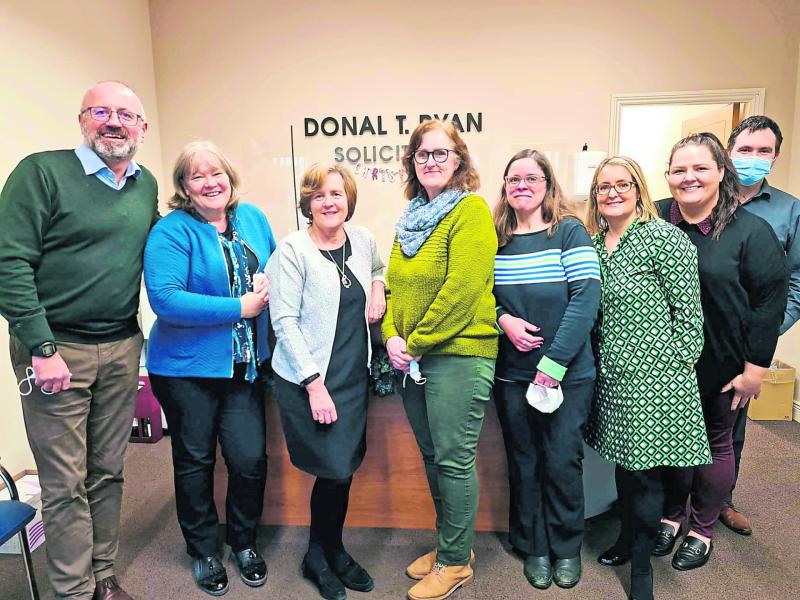 Solicitor Donal Ryan, far left, with some of his current team in Cashel

For Donal Ryan, the practice of law runs deep in the family and is a labour of love rooted in the town of Cashel.

Donal T Ryan Solicitors LLP, based in Cashel and Cahir, has been named as one of the top 75 Best Law Firms for 2022 by the Sunday Independent’s Statista survey.

More than 1,000 legal professionals took part in a peer-to-peer survey, selecting leading firms and recommending their areas of expertise from 24 categories.
Donal Ryan’s practice stood out in the category of Family Law, recognising the talent that Donal’s colleague Máire McMahon brings to the firm.

It was rated as one of the best seven law firms in rural Ireland in the top 75, the only one named from Co Tipperary, and the only firm outside of Cork and Dublin selected for Family Law.
For Cashel man Donal Ryan, practising law is in the blood. “My Dad passed away in September 1984, when I was beginning my career in UCC. I qualified in 1992 and took over the practice,” he told this newspaper.

Máire specialises in Family Law and manages the Cahir office, while Donal is based in Cashel, where he started out as an apprentice in 1988. Máire joined Donal Ryan’s office as a newly qualified solicitor over 20 years having completed a Masters in Family Law and Family Policy from the University of East Anglia and over the twenty years has built up the area of family law within the office.

Donal says he was blessed with six sisters, none of whom wanted to take over the mantle, so “I was left with the job of filling his shoes.
Donal took over in the early 90s when times were different: “It was probably a little easier and less demanding than it is today.”

Would he recommend law as a career to his children? “I am blessed with two children, Donal Óg and Carrie Anne. I would leave it completely up to them. If they came to me and said ‘Dad I have an interest in going into law’ I would not discourage it. I would not pressurise anyone. I’ll let them decide. It’s a tough business. All professions at the moment, whether it’s medicine or law or whatever it might be, are pretty tough stations to be in. It’s how you deal with stresses that define you and your career”.

Donal says his passion for law is rooted in helping people through what can be the most difficult and stressful times in their lives, and that passion shines through in his dedication and attention to detail for all his clients.

“I simply adore helping people who are in a position of possibly stress and anxiety. I absolutely love reducing their stress, and bringing satisfaction to clients who might be in a traumatic situation. Most times you end up with a Solicitor, you’re under pressure, whether it’s after an accident, or buying or selling a property, or a loved one who has passed away. I do like helping people to get through that process.”

Seeing a cloud lift from over a client’s shoulders as they leave the room, “that’s what I absolutely love.” “My strength is listening, understanding, and being empathetic.”
Donal’s law firm specialises in five main areas, road traffic accidents, professional negligence, buying and selling of property, probate and wills, and family law. “I have seven solicitors working for us, and each solicitor has a speciality.”

Donal’s team of solicitors include himself, Máire McMahon, Lorcan Dunphy, Anne-Marie O’Donnell, Jean Sharkey, Bríd O’Dwyer, and Alison O’Mahony, and the company employs some 22 people overall.
It was a “remarkable achievement” to be named in the top 75 for a smaller legal firm, especially for the tough area of Family Law, says Donal. “It’s very stressful, and you do need a speciality in it.”

Máire’s approach to family law is solution based which is necessary when there are children involved in a relationship breakdown, parties may be separating from each other but they remain parents to their children.”

Donal is heavily involved in the community and loves sport, especially hurling. His late father won two League medals in 1948 and 1949, while Donal himself won three West Senior medals for Cashel in the 1990s.

The firm sponsors local teams every year, including Cashel King Cormac’s GAA club, Cashel rugby and soccer teams, Cashel Community School, particularly their recent achievements in the Harty Cup. Knowing his roots are in Cashel gives him that extra personal touch that larger firms might lack.

Has his upbringing in Cashel influenced his philosophy of law? “Absolutely. I try to make law accessible to all. I went to school in Cashel CBS and all my best friends went to Cashel CBS. I’ve always tried to explain law in as accessible terms as possible to the public. Some people find that difficult, I find that quite easy.”