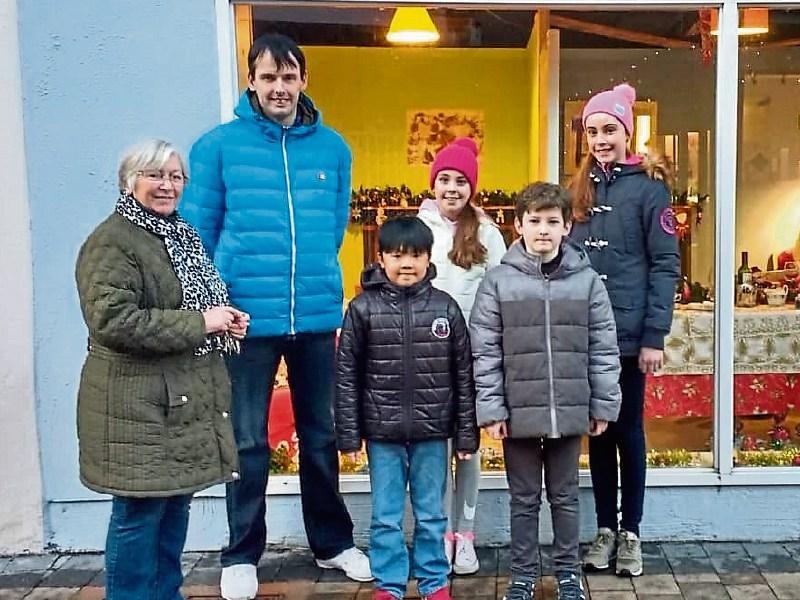 A group of talented local artists have helped bring some badly-needed Christmas cheer to a desolate area of Clonmel’s town centre.

The artists,  all members of the South Tipperary Art Group (STAG) and working as volunteers, have decorated seven vacant shop units in Market Place with Christmas themes.

The displays, as well as the Christmas trees supplied by Tipperary County Council, have brightened an area where most of the units have been unoccupied for the past number of years.

"We have a brilliant work team of approximately eight people in STAG and they are always willing to do anything creative in the community", says Maureen Purcell, the art group’s organiser.

The idea was the brainchild of Carol Creighton, the County Council’s staff officer, who has previously collaborated with STAG to decorate the roundabout on the bypass road (near the Tesco store) at Christmas, Easter and Halloween.

For three weeks the group, sometimes working between four and five hours a day, used their talents to bring some of the magic of Christmas to the seven units, with the artwork sponsored by the county council.

They created festive season themes including The Snow Village, which was completed by Junior STAG, under the direction of Andy Griffin; carol singers and sleighs; The Nativity; Baby Jesus, The Infant in the Crib; The Sleigh, featuring Olaf the Snowman from the film Frozen; the Toy Shop; and The Night Before Christmas, depicting a young child in bed, and a seated Santa surrounded by presents in the dining room.

"There has been a great reaction to the windows. Many people walking through Market Place stop to admire them and they help brighten the area", says Maureen Purcell, who says they are best appreciated from dusk onwards when the lights are turned on and the street comes alive.

She is grateful to everyone who helped, including the Society of St. Vincent de Paul, which supplied many of the items used in the decorations.

The roundabout on the bypass near Tesco has also been decorated for Christmas, with the voluntary work completed by STAG’s adult and juniors and the artwork sponsored by the county council.

The Yuletide atmosphere at Market Place has been enhanced by stalls that are set up on Saturdays.

One of those stalls is operated by junior STAG member Muireann Egan, who is selling the decorations she has created.

The Market Place project is rounding off a busy 12 months for the South Tipperary Art Group.

It celebrated its 50th anniversary this year with several exhibitions in the towns of South Tipp.

The major exhibitions were held at the County Museum and library in Clonmel while the exhibitions at the library in Cashel and the Fethard Horse Country Experience are still running.

Exhibitions were also held in Tipperary town, Cahir and Carrick-on-Suir.

The adult section of STAG has 41 members while the junior section - which currently has 40 members, aged from 9 to 17 - will celebrate its 50th anniversary in 2020, when major events are planned to mark the milestone.

The art group also has paintings for sale and paintings, many depicting  local scenes,  are displayed at several locations in Clonmel including Slievenamon Golf Club, Befanis restaurant, My Café in Market Place and the corridor of the outpatients department of South Tipperary General Hospital.