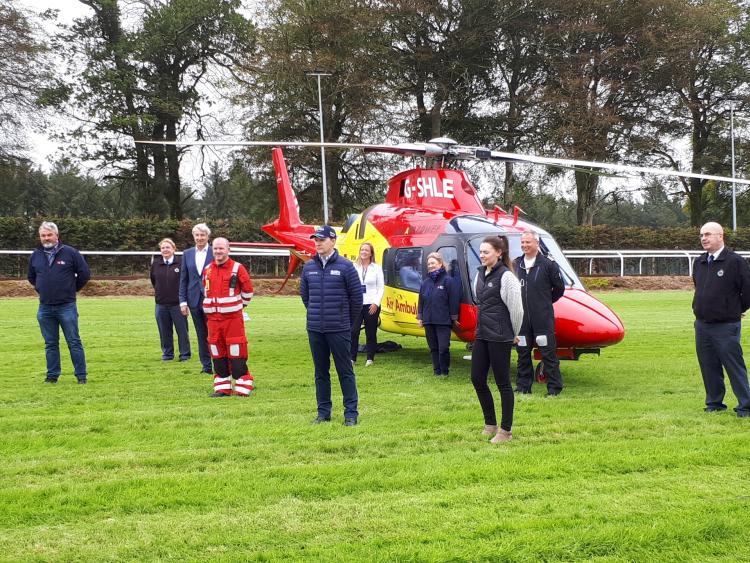 The Coolmore sponsorship deal was announced at Ballydoyle

A three year deal has been agreed and welcomed by all

The Air Ambulance has been called upon on several occasions to tend to fallen jockeys - the most well known of whom was Davy Mullins last October in Thurles.

And, according to champion trainer Aidan O'Brien, the horse racing and breeding industry is comforted by the knowledge that they can have such high levels of Advance Paramedic care at in minutes, when it is needed most.

"Prompt pre-hospital care can, and does, make the difference between life and death. It is our hope that this multi-year donation will give the Air Ambulance sustainable income and will encourage other high level corporate donors to get on board. We need this service to continue and all business leader across all sectors of Ireland need to get behind it,”Aidan O'Brien said at the launch in Ballydoyle this week.

John Kearney, CEO of ICRR added that the group is “over the moon” at the significant support from Coolmore and John Magnier. “ The Coolmore brand is instantly recognisable. Having their backing at the launch of International Air Ambulance Week will give other donors the impetus to get behind us,” he said.

Deputy Michael Lowry was also on hand to welcome the announcement and said:
"The Air Ambulance is a regular sight flying overhead across Tipperary. As TD for Tipp, I have spoken with some of the families they have attended. The speed of the response and the professionalism of the National Ambulance Service staff on board is always foremost in their praise. Lives have been saved and we hope that this generous donation from the Magnier family will allow it to continue in its vital work. We always heard in the past about the first hour being so vital - now with this initiative, the response is down to minutes," Deputy Lowry said.

The ICRR Air Ambulance, based in Rathcool, in North Cork, was launched on July 30 2019 and since then it has responded to over 575 calls including cardiac arrest, road traffic collisions, equine and farm related incidents and falls from height. The Air Ambulance can be with anyone in Munster in 30 minutes. It can, if tasked by the National Ambulance Service, be in most of Connaught and Leinster within 45 minutes.

Each mission costs €3,500 on average and, the charity is campaigning for people across Ireland to sign up to become Friends of the Air Ambulance. Visit www.icrr.ie or call 021 4190999 to sign up.
Coolmore has shown the way - the aim is for others to follow suit.