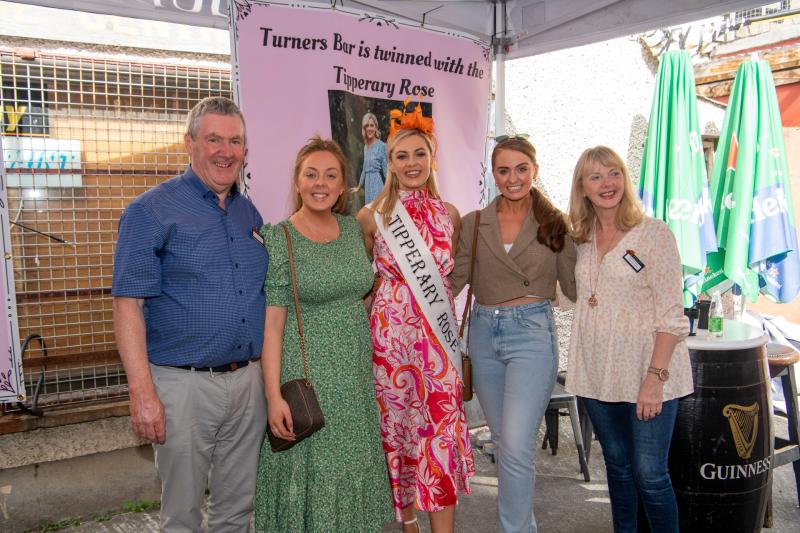 Tipperary Rose Aisling O'Donovan with her family at Turners Bar in Tralee, which was twinning with the Tipperary Rose during the festival

Caption: Tipperary Rose Aisling O'Donovan with her family at Turners Bar in Tralee, which was twinned with the Tipperary Rose during the festival. Pictured from left: Aisling's Dad Sean, sister Teresa, Aisling, sister Sinead and mother Breda. Picture Domnick Walsh

It’s back to reality this week for Tipperary Rose Aisling O’Donovan as she returns to her job as a teacher and assistant principal at Bishop Murphy Memorial Boys’ Primary School in Fermoy after being fêted like royalty at the Rose of Tralee Festival.

It’s only now with her life returning to normal that the surreal whirlwind of the past few weeks is really hitting the 27-year-old, who is from near Fethard.

“It has been a really, really unique and special experience,” she told The Nationalist after her return home from Tralee.

Leading 15 of her fellow Roses on a whistle-stop tour of south Tipperary at the height of the August heatwave and taking part in the Roses Parade in Tralee last week are her two stand out moments representing Tipperary in the contest.

During the International Rose of Tralee tour visit to her home county, Aisling joined some of her fellow Roses in kayaking on the Suir Blueway in Clonmel, played camogie on the lawn of the Cashel Palace Hotel and watched Irish dancers performing at the Rock of Cashel.

And she received a great welcome from the people of her hometown of Fethard when the Roses visited the Horse Country Experience visitor centre there.

“The days in Tipperary were special. It was lovely bringing the Roses to my local places Fethard, Clonmel and Cashel. I felt real pride and the weather really made it,” she recalls.

While most people associate the Rose of Tralee Festival with the big mid-week television interviews in The Dome, the highlight for Aisling was taking part in the Rose Parade that was watched by thousands of people on the streets of Tralee.

“That was unbelievable. We were all on a float and there were so many people out cheering us and waving posters and flags. There was also a fireworks display.”

Aisling was supported at the festival by a strong contingent of family and friends led by her parents Sean and Breda, sisters Sinead and Teresa and her fiancé Colm Barry.

Friends from her college days at Mary Immaculate Teacher Training College in Limerick and the Presentation Secondary School in Clonmel were among those who travelled to Tralee to support her.

The Tipperary Rose’s entourage vociferously cheered her on in The Dome as she went on stage to be interviewed by Dáithí Ó’Sé wearing a gorgeous blue gown designed by Charlotte Lucas from Offaly.

Aisling admits she found the prospect of being the second Rose interviewed on stage in The Dome on the first night of the televised broadcast a bit nerve-wracking but was also glad to get it over with early and enjoy the rest of the spectacle.
Rehearsals and meeting Dáithí Ó’Sé a few times beforehand helped to calm her nerves and in the end the whole interview just flew and was over before she knew it. She was very conscious that this was an experience she would never have again.

She paid tribute to Dáithí O’Sé for the way he put her and her fellow Roses at ease in front of the big audience at The Dome and watching on television. “He is a really calming person; you felt relaxed around him. He is very, very good. It was really cool to do it and I am really glad I did it. It was out of my comfort zone.”

Aisling says she is so proud at how all the Roses so bravely performed on stage in front of millions of television viewers.

For the festival, all the Rose contestants were twinned with a Rose Bud – a little girl who is an aspiring Rose of the future. Seven-year-old Chloe Black was the Rose Bud assigned to Aisling and it turns out they are both distantly related to each other.

“Her great grandad and my grandmother were cousins. It was really special meeting her. She is such a lovely kid,” says Aisling.

Her escort, meanwhile, was John Maguire from Fermanagh, whom she stressed worked very hard ensuring she got from A to B and had everything she needed.

She made loads of new friends among her fellow contestants and particularly got to know her roommates Tara Ryan, the Philadelphia Rose, and Rósín Long the Wicklow Rose, well. They have all formed a bond through their shared experience of representing their counties, states and countries in the festival. “I will definitely be staying in touch with all the girls,” Aisling vows.

She believes the public love the festival so much because it’s such a celebration of our culture.

“It’s so unique. It’s amazing that every year the crowds get even bigger. What was really notable for me was that anyone involved in the festival at any stage comes back every single year to celebrate it again with a new bunch of Roses.

“It’s a testament to the people who organise the festival and I can’t wait to go back next year to meet all the girls.”