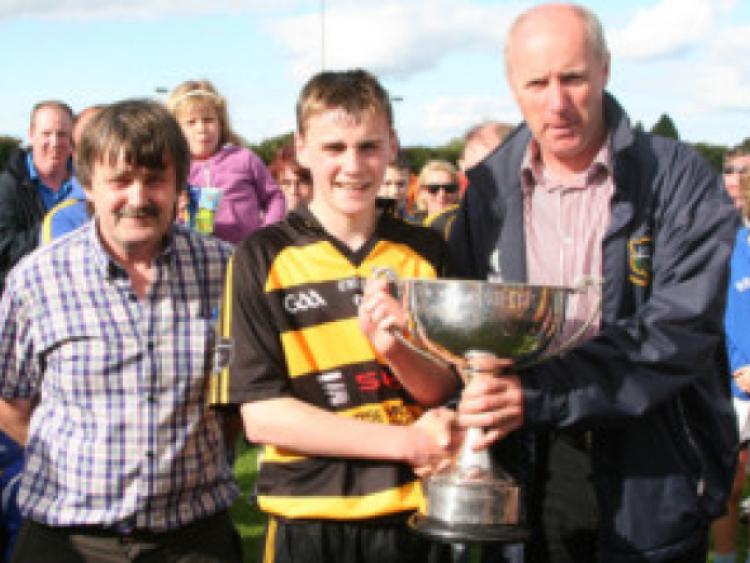 Last Saturday was an action packed afternoon in Cashel with the staging of the U-14 A, B and C county finals.

Last Saturday was an action packed afternoon in Cashel with the staging of the U-14 A, B and C county finals.

First on the program was the C final with South champions Fethard taking on Solohead from the west. This game never produced a spectacle for the attendance as Fethard were far superior to their opponents. Jack Ward opened the scoring frenzy for Fethard with a pointed free. The Solohead net was shaking with a Harry Butler goal on the sixth minute follo wing a pass from Ross McCormack. By the tenth minute Fethard had added four more points to their tally of 1-05 with points courtesy of Harry Butler (2) and one apiece from Ross McCormack and. Darren Lynch.

Another solo run by McCormack added a second Fethard goal and seconds later more misery for Solohead as their net was shaking for the third time courtesy of Jack Ward to give Fethard a 3-5 lead. As the half time whistle sounded Fethard had two more points from Ward and McCormack for an interval score of Fethard 3-7 Solohead no score.

The second period of the game was no different as more misery piled upon the Solohead defence leaking a further 4-6 while getting onto to the score board with two pointed frees from Jack Redican and Ben Quinn. At full time the score line read Fethard 7-13 Solohead 0-2.

At the presentation of the cup to Fethard captain Jesse McCormack, county chairman Joe Kennedy while commiserating with Solohead acknowledged their performance despite the huge pressure they endured from a victorious Fethard team.

Next on the program was the B contest between last year’s beaten finalists Cappawhite and a south amalgamation of Skeheenarinky/Newcastle. The scoring commenced immediately for Cappawhite with a point from William Armshaw within the opening thirty seconds. The south champions net was shaking on the second minute for Cappawhite opening goal from William Barry quickly followed by a point from Gearóid Ryan to put the west boys ahead 1-02. Brendan Murphy the Cappa centre half was enjoying the freedom of the pitch roaming everywhere at ease. He pointed in the sixth minute and was influential in lots of moves there after. Cappawhite dominance was very evident and their opponents could do little about it with their defence under constant pressure. By the twelfth minute Cappa had three more points with a free from David Murphy and William Barry and captain Robbie Quirke scoring from play to put their tally at 1-05.

Skeheenarinka/Newcastle’s opening addition to the score came on the fourteenth minute by way a of pointed free from their captain Jamie Grant. Their only other addition during the first period came in the twenty second minute with a pointed free from Josh Macken, while their opponents from the west had doubled their score to 2-10. David Murphy pointed a free and got two from play. Robbie Quirke pointed a 65 and added two from play while William Barry added a point and the games second goal coming from Gearóid Ryan to put the interval score at Cappawhite 2-10 Skeenarinka/Newcastle 0-2.

Similar to the opening game the second half of this encounter was dominated by the eventual champions. Cappawhite had another point by the first minute from a pointed David Murphy free. Captain Quirke added another to put Cappa at 2-12. On the eight minute Jamie Grant got his second point for the south boys and his team’s third. The game was over as a contest as Cappawhite could do as they wished and full credit to their south opponents as they never gave up despite the extreme pressure they were enduring in all sections of the park. Skeenarinka/Newcastlle got a goal on the mid way mark courtesy of Padraig Casey but it was only for cosmetic purpose as Cappawhite had all but secured the title with fifteen minute remaining. They added a further 1-3 to put the final score reading Cappawhite 3-15 Skeenarinka/Newcastle 1-03 with the 1-01 coming from David Murphy, two points from Gearóid Ryan.

Chairman Joe Kennedy before presenting the cup to a joyful captain Robert Quirke thanked the Cashel club for having everything in such good condition and also acknowledged the referee and his officials of the two games that had taken place..

The last game of the day was the 14 A final between Durlas Og and Arravale Rovers.

The west champions were first on the score board with a point within thirty seconds from Cormac Maher quickly followed by another Arravale point from Fergus Halligan. Durlas Og got in on the scoring to register three unanswered points to go one ahead 0-3 to 0-2. Anthony Creedon opened their account from play and Aidan Butler converted two frees. Durlas Og got a grip on proceedings as regards the possession stakes with Anthony Conroy and Aidan Butler adding two more Durlas Og points to go -05 to 02 in front..

Jack Lowry pointed for Arravale Rovers to reduce their defeict 0-5 to 0-3. Further joy came to the west supporters as Jack Lowry crashed in the opening goal of the game. From the resulting puck out Arravale gained possession and were awarded a free from the sideline which Jack Lowry dropped in and was connected on by Briam Lowry for Arravales second goal to put the west boys well ahead 2-3 to 0-5. Fergus Halligan added another west point to bring the Arravale tally to 2-4

Liam Power had the mid followers rejoicing after scoring a goal for Durlas Og to put the score reading Arravale Rovers 2-0 Durlas Og 1-5.

Fergus Halligan added two more points for Arravale while Liam Power reduced Durlas Og deficit by a point to put the half time at 2-6 t0 1-6 in favour of the west men.

Liam Power had the opening point for Durlas Og 2-6 to 1-7. Some wasted opportunities went before a second point was added to the Durlas Og tally from captain Michael Russell. A minute later Aidan Butler added another from a free to level the score 2-6 to 1-9 for the second time in the game. Fergus Halligan put Arravale ahead with a pointed free but seconds later the sides were even a third time when Darren Fahey struck over a lovely point from play. 2-07 to 1-10.

Halligan once again to Arravales rescue with another pointed free and repeated this feat two more time to put Arravale in front 2-9 to 1-10. Durlas Og were attacking vigoursly but could not register their efforts onto the score board and in added time matters were well and truly sealed for Arravale Rovers when Michéal Sharpe scored Arravale’s third goal for a concluding score of Arravale Rovers 3-9 Durlas Og 1-10 bridging a sixteen year wait as the last won the title in 1987.

Before presenting the cup to winning captain Darren O’Dwyer chairman Joe Kennedy thanked both teams for an excellent display of hurling and commiserated with the mid champions going down in a great contest. He thanked all the referees, their officials and all involved at Cashel King Cormacs club.