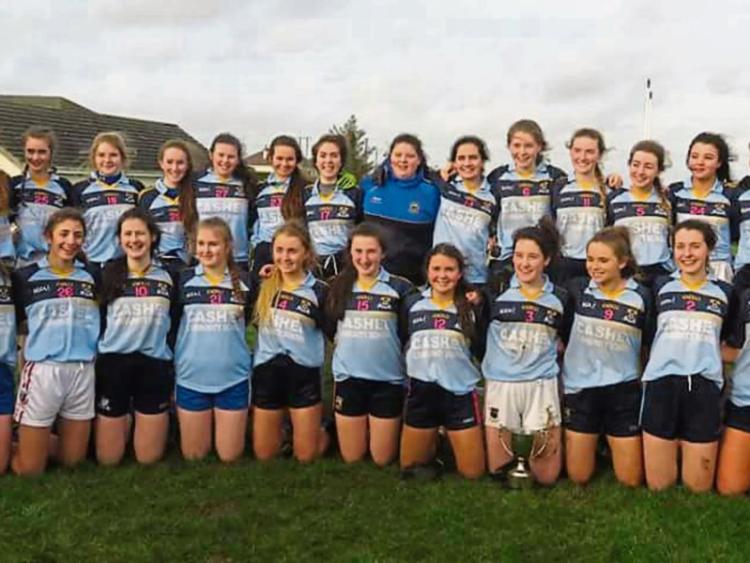 Cashel Community School claimed their first Senior Ladies Football title having only entered a team for the first time four years ago. Both Cashel and The Ursuline had superb wins against Cork opposition in their Munster Semi Finals to reach the final.

The first ten minutes was a tense affair, with both sides clearly focused on not making too many mistakes. Kate Gayson Molloy opened the scoring for Cashel with a superb point against the wind but the Ursuline hit back with two points. Cashel then had a spell of dominance, where they were winning the majority of the Ursuline kickouts and when the Ursuline did manage to break out, Karin Blair who played as a sweeper, intercepted numerous balls and slowed down attacks. During this period of dominance, Sarah Delaney scored 1:2 with Emer McCarthy adding a point, to leave the score at 1:4 to 0:02 in favour of Cashel.

The Ursuline then has their own spell of dominance, kicking three unanswered points before Cashel won a penalty that Kate Gayson Molloy kicked over the bar to leave a goal between the sides at the break.

Cashel got the first score of the second half from Sarah Delaney, before the Ursuline hit back with a goal following a superb initial block from Cashel full back Katelyn Fleming. The Ursuline were on top, even though they were playing against the wind but Cashel showed great determination and resilience to keep their attacks at bay. Sarah Delaney then added a point to the Cashel scoreboard and with just over ten minutes to play, Cashel were ahead by two points so it was all to play for.

Then, there were two quick turning points. Sarah Delaney scored a goal direct from a free before Cashel were awarded a penalty soon after.

This time, Kate Gayson Molloy raised a green flag to give Cashel an eight point lead with little over five minutes to play. Emer McCarthy added a point for Cashel to leave nine points between the sides. The Ursuline to their credit never threw in the towel and battled to the end. They struck the bar from a free but eventually found the net, a score that their efforts deserved. However, the clock was against them as there was less than a minute to play. The final whistle blew to the relief of the Cashel supporters and history was made.

Katelyn Fleming as team captain accepted the cup on behalf of her teammates. Cashel had superb performances from all fifteen players who started and the three subs used added energy and fresh legs when required. I would be wrong to single out any individual, even if Caoimhe Perdue, who was outstanding, received player of the match.

This could have been given to numerous players on the day. Cashel now look forward to an All-Ireland Semi Final against the Leinster champions.